Honoring the heroes of World War II on the 75th Anniversary of D-Day. 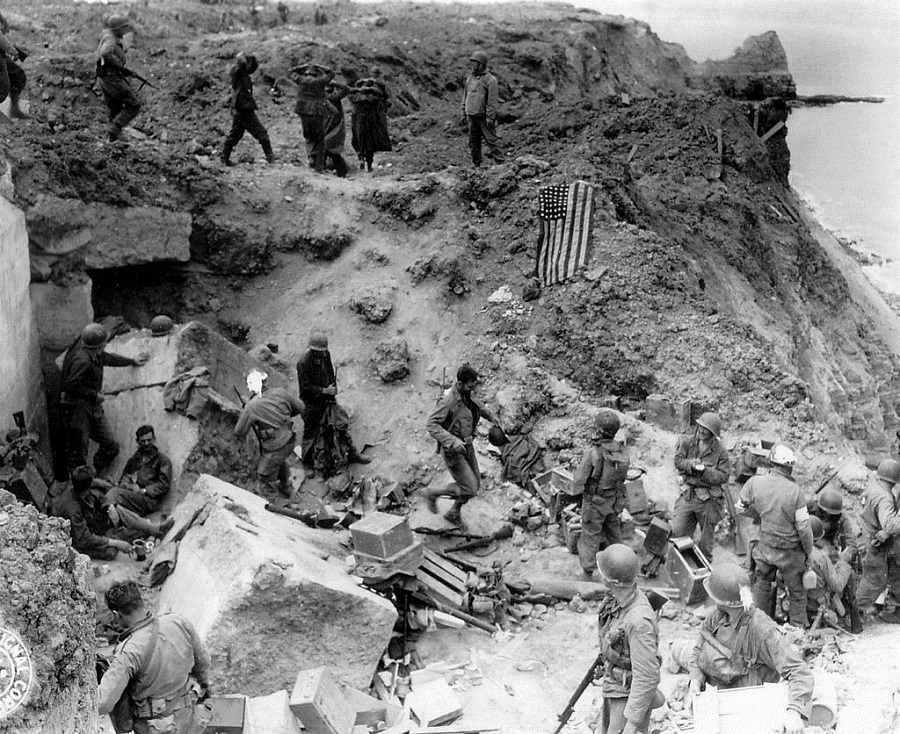 Relief forces reach Pointe du Hoc after U.S. Army Rangers captured the highest point between Utah and Omaha Beach in Normandy, France, on D-Day in 1944. The American flag had been spread out to stop friendly fire as German prisoners were led away.

On this day 75 years ago, our country’s Greatest Generation began liberating Europe from tyranny. In the immortal words of President Ronald Reagan on June 6, 1984:

“The Americans who fought here that morning knew word of the invasion was spreading through the darkness back home. They fought — or felt in their hearts, though they couldn’t know in fact, that in Georgia they were filling the churches at 4 a.m., in Kansas they were kneeling on their porches and praying, and in Philadelphia they were ringing the Liberty Bell.

Something else helped the men of D-Day: their rockhard belief that Providence would have a great hand in the events that would unfold here; that God was an ally in this great cause. And so, the night before the invasion, when Colonel Wolverton asked his parachute troops to kneel with him in prayer he told them: Do not bow your heads, but look up so you can see God and ask His blessing in what we’re about to do. Also that night, General Matthew Ridgway on his cot, listening in the darkness for the promise God made to Joshua: ‘I will not fail thee nor forsake thee.'”

Had these men of valor not been willing to sacrifice everything for freedom, our country would not exist today as we know it. Seventy-five years later, their courage guides and inspires a new generation of American warriors.

“Here, in this place where the West held together, let us make a vow to our dead. Let us show them by our actions that we understand what they died for. Let our actions say to them the words for which Matthew Ridgway listened: ‘I will not fail thee nor forsake thee.'”