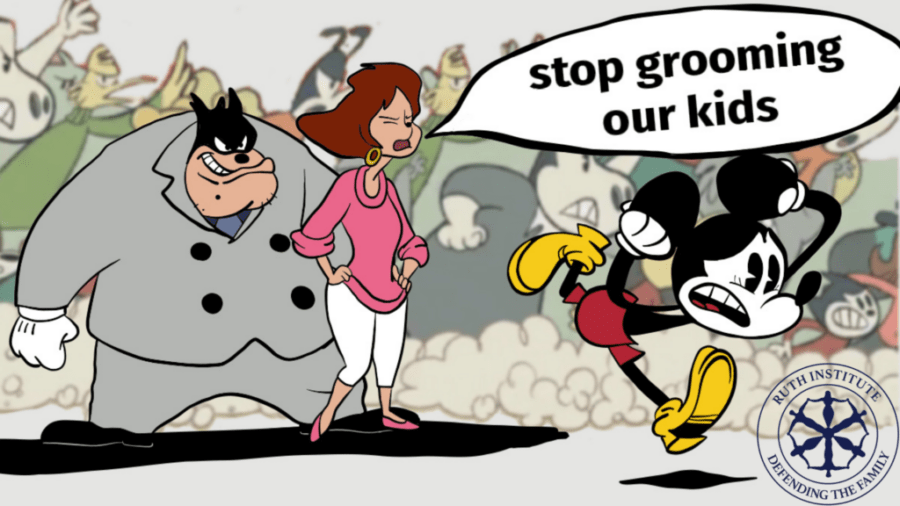 In March, Disney said it opposed the recent Florida law prohibiting teachers from discussing sexual orientation and gender identity with children in kindergarten through third grade. Now the company is hiding from a firestorm of criticism, refusing to respond to media questions.

“There is no logical reason to talk about homosexuality to children who are still playing with dolls and toy trucks,” Morse said, “but LGBT activists want to get them young. Their goal is to indoctrinate and groom as early as possible.”

Disney can’t hide from public opinion. A recent poll showed that when the so-called “Don’t say gay” law is explained, people support it 67% to 24%.

Why Take Your Kids to Sodom?

“Disney could end up paying a high price for giving in to pressure from activists. People are cancelling Disney World vacations and cruises, as well as subscriptions to Disney streaming services,” Morse said.

Indiana Congressman Jim Banks recently wrote to the company’s CEO that some in Congress oppose extending Disney’s copyright over Mickey Mouse when it expires at the end of 2023.

Morse remarked: “Management is also facing internal opposition. Employees who support family values say they are tired of being harassed and bullied by those on the other side and that they see Disney on the wrong side of the Culture War.”

“Woke corporations are now getting pushback not just from the general public, but from their own employees.”

The Ruth Institute asked Dr. J Show viewers what topics they’d like to see covered. The overwhelming response was transgenderism. Because of that, Dr. Jennifer Roback Morse secured this interview with Dr. John S. Grabowski, professor of Moral Theology and Ethics at the Catholic University of America, and author of Unraveling Gender: The Battle over Sexual Difference.

Hear Morse and Grabowski discuss what all is entailed by the term “Gender Ideology.” Did you know there are more than 100 genders according to some UN bodies? Supporting the new gender ideology means rethinking medical practice and how we treat people suffering from gender dysphoria, Grabowski points out, leading to aggressive chemical and surgical procedures to try to rewrite the human body.

Suicide rates of fully transitioned people are 19-20% higher than that of the average population because the psychological pain that led someone to transition goes untreated. Remaking our bodies to address a psychological problem is bad medicine, Grabowski said.

Watch Morse and Grabowski connect the dots from Marxism to the roots of feminism and our current culture of trying to erase sex and gender—the end goal being that lab-based conception replaces the maternal womb. Then women will be equal to men.

At the 2021 Summit for Survivors of the Sexual Revolution, Dr. Erin Brewer spoke about the harsh reality of the trans industry. Erin is co-founder of the Compassion Coalition, an international group for those fighting to ban invasive, harmful, unproven medical interventions for gender-confused children; as well as Advocates Protecting Children, which raises awareness and supports efforts to stop the unethical treatment of children by schools, hospitals, and mental and medical healthcare providers under the duplicitous banner of gender identity affirmation.

“Transitioning is not effective; it’s harmful and experimental. The best treatment for children who are suffering from these difficult feelings is to allow them to progress naturally into their adult body. Most of them will accept themselves as the sex they are as they go through puberty,” Brewer said.

“Gender affirming” interventions take functioning body parts and alter them so they no longer function properly. The long-term effects of such treatments are unknown, yet doctors call them “safe, effective, and helpful,” which suggests they care more about profits than the well-being of patients.

These patients are experiencing intense mental anxiety and distress. Medical professionals tell them they are physically flawed, and the only way to fix the problem is with physical interventions.

When people want to transition, they are celebrated. When they want to detransition back to their original body, they are dismissed, Brewer points out.

WARNING: This video contains graphic images of transition surgeries. We apologize for the nature of these, but given the importance of the issue, we feel the public has a right to know.