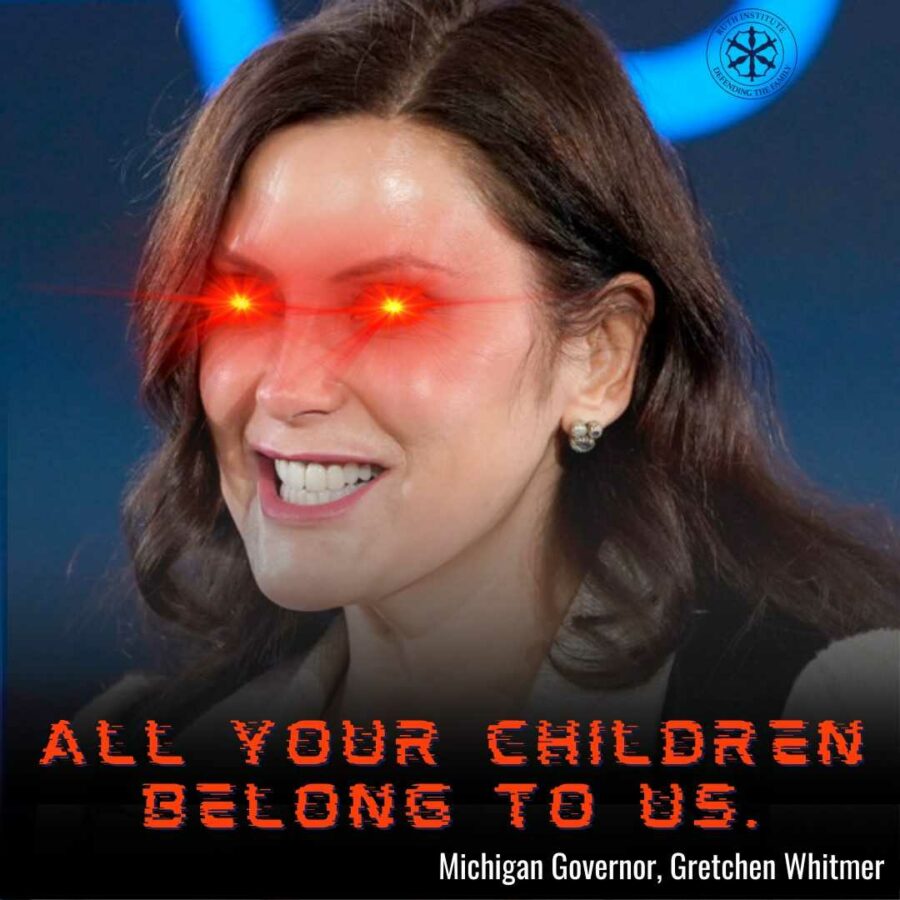 “Michigan’s Proposal 3 – an amendment to the state’s constitution – is about far more than unlimited access to abortion,” said Ruth Institute President Dr. Jennifer Roback Morse, Ph.D. “It would also allow clinics to dispense puberty-blocking drugs to minors as a first step toward ‘gender reassignment’ surgery, without parental knowledge or consent.”

“This amendment to the Michigan Constitution is being hyped as a way to restore ‘full reproductive freedom,’ read: an unlimited right to abortion. It’s much more, including a right to gender-transitioning drugs and surgery for minors.”

“This deceptively-worded amendment refers to ‘individuals.’ If the amendment’s framers intended its provisions to be limited to adults, they could have easily said so.”

Prop 3 says, “Every individual has a fundamental right to make and effectuate decisions about all matters related to pregnancy, including contraception, sterilization… and infertility care.”

Article 3 of the proposal potentially eliminates parental involvement in their children’s decision-making: “Nor shall the state penalize, prosecute, or otherwise take adverse action against someone for aiding or assisting a pregnant individual in exercising their right to reproductive freedom with their voluntary consent.”

“Concerned parents who want to slow down their daughter’s decision-making are at greater risk than the school counselor or Planned Parenthood worker who facilitates the girl’s abortion,” Morse observed.

Planned Parenthood Could Sterilize Your Kids

Even worse, Prop 3 opens the door for minors to start taking the first step on the road to permanently and dangerously altering their bodies. Morse asked: “If you were crafting an amendment just to ‘codify Roe,’ allowing abortion, why would you include a right to ‘sterilization and infertility care’? A person who can’t conceive, doesn’t have to be concerned about abortion.”

Furthermore, puberty-blocking drugs, cross-sex hormones, and ‘trans-gender’ surgery involve sterilization and infertility. “Once a confused young girl has her uterus removed, she becomes infertile. When a teenaged boy has his testicles cut off, he has been sterilized,” Morse noted.

Dispensing puberty blockers and cross-sex hormones, which interfere with the natural processes of the body, is a substantial source of income for Planned Parent affiliates.

“If Prop 3 passes, Planned Parenthood won’t have to worry about pesky parents getting involved in a child’s decision to have an abortion or start taking dangerous hormones,” Morse warned. “Planned Parenthood can count on a steady stream of revenue from cross-sex hormones, as well as from abortion.”

“The mainstream media doesn’t discuss these things, it merely speaks of codifying Roe,” Morse said. “It’s up to parents and all voters to educate themselves on the awful reality of Prop 3 before casting a ballot on November 8.”

Check out the Ruth Institute’s comprehensive Transgender Resource Center on the dangers of the transgender ideology.

The EGI website has free downloadable study guides for classroom use to spotlight virtues needed for young people to emulate. One such virtue, demonstrated in several movies from the 1940s, Hollywood’s Golden Age, is chastity, as well as a commitment to marriage.

These movies “present the truth about men and women in love and what is God’s plan, in a place where you aren’t supposed to talk about God.” (Cough! Public schools!) “The poetic and the moral imagination of these wonderful films inspire our young people. People are so starving now to have [this].”

These movies show “a man and a woman loving each other deeply, and handling challenges from the temptation to have intimacy prior to marriage. It’s a beautiful way that young people today can take in the truths about sexuality. At the same time, it’s fully within God’s plan for our human sexuality.”

There are also pro-life movies, which show that “natural law is planted in the human heart.” Modern movies rationalize things that are against natural law, but the stories don’t work as well, McGraw points out.

Learn about the Production Code, in effect from the 1930s-60s, which dictated the moral conduct and language in movies. Fr. Daniel Lord, S.J., wrote the code in 1930 after complaints were made about the immorality of movies in the ‘20s. Movie moguls accepted these codes when Fr. Lord told them, “The sympathy of the audience will not be drawn to the side of wrongdoing, crime, or sin.”

Watch two of McGraw’s favorite movie clips and hear her explain the virtue depicted in each. “There’s always a serious moral choice that’s being made. This is especially great for our young people today because, for their entertainment, they hardly see any movies that show people making moral choices…. God made us to choose the good.”

“According to the United Nations, the earth’s population will reach 8 billion around November 15, 2022. As we approach this milestone, a chorus of doom will arise from those who insist the earth is over-populated,” said Ruth Institute President Dr. Jennifer Roback Morse, Ph.D. “But that is utter nonsense.”

“Misanthropists have warned of over-population for more than 200 years. In the late 18th century, when Thomas Malthus predicted that over-population would lead to mass starvation, there were fewer than 1 billion of us on earth. Instead, the past two centuries have been the most prosperous in human history.”

“When Ehrlich wrote this, population was at 3.7 billion. Now we’re more than twice that number, and, by almost every measure, we are better off today than we were 54 years ago,” Morse said.

“More people lead to more production and innovation. A growing population results in more exploration and more efficient methods of extracting and utilizing natural resources, which – absent the heavy hand of government – leads to lower prices.”

“Every advance in history, from the Age of Exploration to the Computer Age, has been spurred by population growth,” Morse added.

“Overcrowding? Every person on earth could fit in the state of Texas in a space the size of a house, so we’re not in danger of running out of living room anytime soon.”

“As far as carbon footprints, man-made global warming is only a theory. Eco-cultists lament something that’s never been proven, but declining fertility is a fact.”

“In 1950, the average woman had 4.7 children. Today, that number is 2.4 and falling. With 2.1 needed just to replace current population, sometime this century, possibly in the next 20 years, we’ll be in Demographic Winter. Productivity and prosperity will decline.”

Unlike neo-Malthusians and the carbon-footprint crowd, the Ruth Institute celebrates population growth and has created a birthday card to Baby 8 Billion that can be signed here.