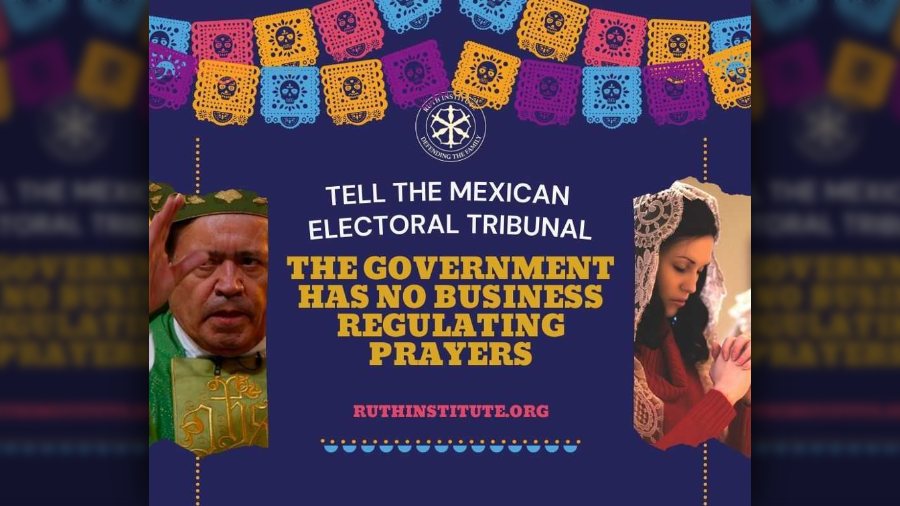 Two Mexican cardinals, a bishop and three priests were found guilty of violating the Mexican constitution for urging Catholics to pray for guidance before voting. They also warned that the ruling socialist party was a threat to life and the family.

The decision was handed down by Mexico’s national Electoral Tribunal in response to complaints by the ruling party.

Ruth Institute President Dr. Jennifer Roback Morse, Ph.D., called the decision a travesty. “The anti-religious bigotry of one of the tribunal judges was on full display when she said, ‘Votes aren’t celestial or spiritual things. This is about deciding votes with knowledge, with information, apart from pondering other things, and this is just what must be respected, because celestial inspiration is not going to cause the best people to be in popularly elected positions. It’s logical.’”

“There is nothing logical about claiming that all religious people are, by definition, illogical,” Morse said.

One of the defendants, Cardinal Sandoval, urged Catholics “to pray and ask God to illuminate them when they vote.”

Morse charged: “The judge revealed her totalitarian mindset when she said, ‘Of course, that must not be permitted.’”

“Whether she is saying that people praying before they vote must not be permitted or that a religious leader cannot suggest to people that they pray before they vote, no official of any country has the right to tell people what they can or cannot say in their prayers. No government has the right to tell religious leaders they cannot encourage people to pray before making a significant decision,” Morse said.

“The Ruth Institute supports these prelates for taking a courageous stand against the anti-family policies of their government. We wish more clergy around the world would join them in speaking out in favor of the natural and divine law.”

How Vaccine Mandates Are a Continuation of the Sexual Revolution

The latest Dr. J Show guest is Dr. Douglas Farrow, author and Professor of Theology and Ethics at McGill University in Montreal, Canada. Dr. Farrow was awarded a Queen Elizabeth II Diamond Jubilee medal for his contributions to public discourse. He is an outspoken critic of the current pandemic regimes.

One of Dr. Farrow’s most popular books is Nation of Bastards, which concerns same-sex “marriage.” Learn how the degendering of marriage led directly to the degendering of all people. Listen as Dr. Farrow explains why the only way out of our current gender confusion is to reinstate the binary male/female nature of humans.

Learn, also, about Covid vaccines being genetic manipulators. The World Health Organization admits that both RNA and DNA are tampered with by these vaccines. “We’re talking about humans redesigning humans,” Dr. Farrow said. “Do corporations and the wealthy elite have the right to force us to participate in their experiments?”

“Fundamental freedoms, given by God and guaranteed by constitutions, are being overridden in a climate of fear. This ought to tell us something is fundamentally wrong.”

Scary stuff? You bet. But this sort of manipulation of the public has been happening by Sexual Revolutionaries for years. Watch through to the end to hear Dr. J and Dr. Farrow’s solution.

Two members of the University of Pennsylvania’s women’s swim team have come forward to describe their teammates “crying and upset” when a man who calls himself Lia Thomas destroyed the competition, including other teammates, at a recent meet.

Ruth Institute President Dr. Jennifer Morse said, “These women have trained long and hard, and had a good chance to win the Ivy League competition this year. That was before a mediocre male swimmer calling himself a woman decided to join the team and break the women’s records.”

“It’s outrageous that the University of Pennsylvania says ‘Lia Thomas’ will be allowed to continue competing as a woman, despite the manifest unfairness of the situation.”

“For years we were told that colleges weren’t spending enough on women’s sports and women weren’t given enough chance to compete. Now, so-called transgenderism is destroying women’s sports, and no one seems to care.”

“Women can’t compete against considerably more powerful, muscular males. But the same ideology that says a man can change his sex also says it’s fair to let him compete against women, where he has an almost insurmountable physical advantage.”

“Most members of the women’s swim team are afraid to speak out for fear of retaliation by the university. This is intimidation, plain and simple.”

“‘Lia’ Thomas is not an oppressed person. He is not the reincarnation of Rosa Parks or Dr. Martin Luther King, Jr. This is a man who says he is a woman. The irrational trans ideology has created an impossible situation, which ‘Lia’ is now shamelessly exploiting for his own advantage.”

Gender Incongruence: Not Born in the Wrong Body

The Ruth Institute released another video from its 4th Annual Summit for Survivors of the Sexual Revolution. This one features Dr. Laura Haynes of the International Federation for Therapeutic and Counseling Choice. She has testified before legislative hearing committees in several US states, trained therapists from 27 nations, provided expert opinion for courts, and presented to U.N. diplomats and high-level government officials. She retired from clinical psychology practice in 2018 after more than 40 years’ experience. Her education includes three masters degrees and a Ph.D.

Part of what Dr. Haynes’s organization does is address claims that transgender identity is inborn and that social affirmation and gender affirming medical treatments decrease suicides and mental disorders.

Even “progressive” organizations admit that transgenderism stems primarily from trauma or psychiatric disorder, including suicide ideation, which happen before gender dysphoria manifests. Brain scans and other medical tests find no proof of inborn gender incongruence. Additionally, the worldwide medical consensus is that social affirmation and gender medical treatments do not decrease suicides or mental disorders.

If you know anyone suffering from gender dysphoria, you must show them, or their parents, this video.

On Demographic Winter, Elon Musk Gets It

Unlike many of the super-rich, Elon Musk, Time Magazine’s Person of the Year, understands the danger the world faces with a Demographic Winter.

Speaking at a Wall Street Journal CEO Council Summit, the Tesla founder declared: “There are not enough people … One of the biggest risks to civilization is the low birth rate and rapidly declining birth rate … If people don’t have more children, civilization is going to crumble. Mark my words.”

“The myth of overpopulation has been fueled and funded by the very rich for a long time. Starting with the Rockefellers founding the Population Council, and continuing with Bill Gates, George Soros and Warren Buffet, the super-rich have done incalculable harm to individuals and society.”

“It’s not enough for these people to privately support abortion and contraception, they have also spent their wealth influencing governments to implement anti-natal policies, using taxpayer money. They’ve encouraged international agencies like the UN Population Fund to support horrific, brutal population-control policies in places like China and India.”

“So, three cheers for Elon Musk. It’s great to see at least one member of the billionaire’s club who understands that human beings are an asset, not a liability, and an asset which will be in increasingly short supply as we move deeper into the 21st century.”