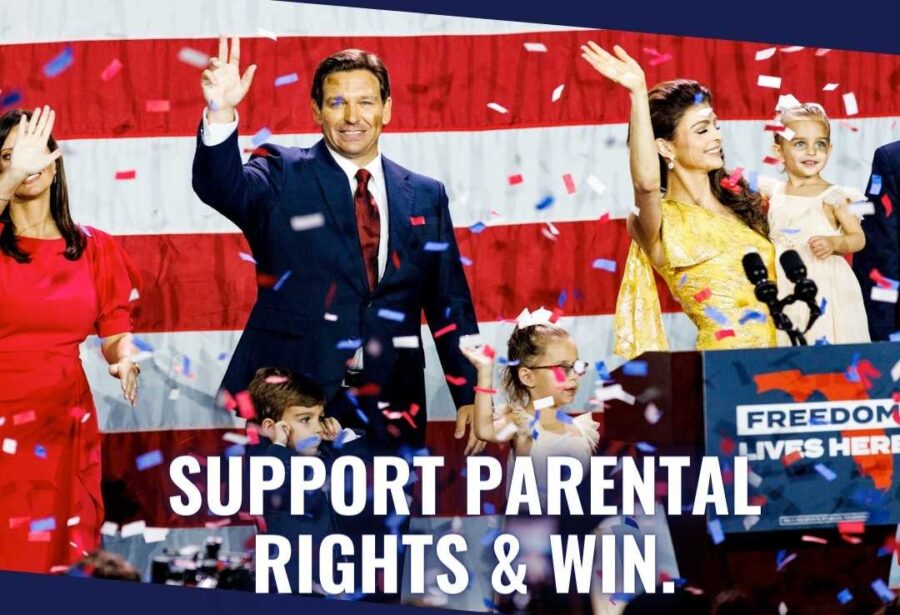 “Ron DeSantis is the first Florida governor to endorse candidates in local school committee races,” said Ruth Institute President Dr. Jennifer Roback Morse, Ph.D. “And 24 out of 30 of his endorsees won, including in the Democratic stronghold of Dade County.”

“They won principally by supporting parental rights in education,” Morse noted. “Sadly, America’s schools have become an intellectual battlefield where ideologues masquerading as educators push the agenda of the Sexual Revolution.”

“Frustrated parents have been waiting for an opportunity to fight the indoctrination of their children. With conservatives running for local school committees all over the country, they now have the chance.”

“Starting last year with school committee meetings in Fairfax, Virginia, parents have begun to push back – especially on the issue of transgenderism.”

“At one such meeting, when a concerned parent tried to read from a school library book, her microphone was cut off. Board members said they didn’t want minors present exposed to salacious material but had no problem making it available to them in school libraries.”

“Recently, DC schools have been pushing transgenderism with a survey that asks students as young as 11 about their ‘gender identity’ and ‘sexual orientation. As if children who haven’t gone through puberty need to think about their so-called gender identity.”

“Shock troops of the Sexual Revolution never miss an opportunity to push the party line to a captive audience,” Morse charged. “Now parents, and officeholders who support them, are fighting back. Good for them. And may parents across the country do the same.”

Is Gender Binary? What About “Intersex” Births?

The latest Dr. J Show features Dr. Quentin Van Meter, who testified before the Florida Board of Medicine’s investigation of “gender-affirming care.”

The Board held extensive hearings, listening to the sociological and scientific facts from numerable studies, experts, and people who transitioned and de-transitioned themselves.

The hearings proved not only that there is no long-term evidence that “treatment” helps patients with gender dysphoria, but there is significant evidence that it can harm them.

Dr. Van Meter shares the evidence he provided for the Board as a pediatrician. He has decades of experience treating babies with ambiguous genitalia, or “intersex” deformities. He explains how these rare abnormalities occur, how to treat them, and what they mean for the child going forward.

World population hit 8 billion November 15, according to the U.N. Population Division. “This is good news,” said Ruth Institute President Dr. Jennifer Roback Morse, Ph.D. “The challenge of the 21st century will not be too many people, but too few.”

“Doomsayers wail about over-population, unsustainable growth, and carbon footprints, but no one knows how many people this planet can comfortably hold. In 1968, Paul Ehrlich wrote The Population Bomb, forecasting worldwide starvation in the 1970s. At that time, the earth’s population was 3.5 billion.”

“Not only have we not starved to death, but humanity is better fed, and has better housing and medical care than it did 54 years ago.”

Who Will Care for Us When We’re Old? Maybe No One

“That means more elderly in need of services, and fewer workers to pay for them. It will result in declining tax revenue and increasing expenditures for pensions and health care. Not to mention the simple lack of people in the workforce for essential services.”

Morse reminded us: “Elon Musk was prophetic when he said, ‘If we don’t have more people, civilization is going to crumble.’”

“Though the world receives its 8 billionth person today, due to worldwide declining fertility, the earth is headed toward Demographic Winter.”

“Instead of bemoaning the arrival of Baby 8 Billion, the Ruth Institute celebrates,” Morse said. “Right now, the world needs all the people we can get.”

Learn more about the dangers of falling fertility at The Ruth Institute’s Demographic Winter Resource Center.