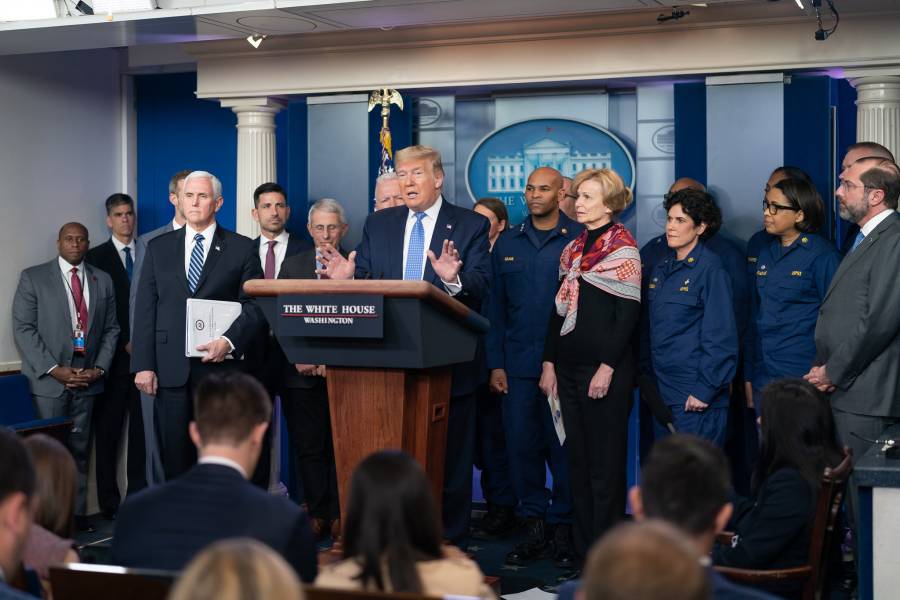 Silver linings accompany most catastrophic events, and one major one with the coronavirus is the remarkable way Americans (and people throughout the world) have come together to fight this outbreak.

Though the stock market has reflected a nation in panic, in other respects Americans, for the most part, have reacted responsibly, unselfishly and cooperatively, and I pray we are making substantial progress toward flattening the growth curve of this virus.

President Donald Trump and his extraordinary team of generals leading this war effort are implementing a multipronged approach to combat the spread of the disease, treat those infected with it, provide financial relief to those affected by it, calm the nation and stabilize our economy, which has been blindsided by this catastrophe.

I marvel at the professionalism of President Trump and Vice President Mike Pence, and those aligned with them on the dais for the daily White House press briefings, all of whom are earnest, transparent, informative and responsive. They are optimistic and encouraging without providing false hope, diligently studying this problem around the clock, employing the best minds and seeking to eliminate unnecessary bureaucratic red tape to expedite solutions.

There is not a hint of partisanship in the air, only a unified commitment to defeating this enemy and restoring America to robust physical and economic health. None of us knows what the ultimate outcome will be, but I trust that the virus’ devastation will be strikingly less severe for Americans because of this assembled team of dedicated patriots.

By contrast, there is sadly plenty of partisanship and Trump hatred from the press. From the outset, many of them focused on little else but smearing Trump and his approach to eradicating the virus.

As I watched the briefings earlier in the week, I was taken aback by some of their “gotcha” questions, which were designed to impugn and embarrass Trump, rather than facilitate the flow of information to the public. Couldn’t these people suspend their bile for a minimal grace period given the nature and severity of the crisis?

I was struck by the rudeness of some of these vultures who should at least pretend to be on Team America instead of Team Anti-Trump. While some were asking helpful questions and eliciting important information from the panel, others accused Trump of racism for identifying China as the virus’ country of origin, and of inciting violence against people of Chinese descent in the United States.

One reporter asked Trump if we might be headed toward a virus-induced recession, and he acknowledged it is possible. Media outlets immediately blasted the headline “Trump Says We May Be Headed for a Recession,” which was sensational, inflammatory and intentionally misleading because they implied that Trump brought it up and that it was virtually inevitable.

One particularly despicable attack involved a misleading New York Times report that contained an incomplete quote from President Trump during a conference call with state governors. The report implied that Trump had callously denied the governors’ request for respirators, ventilators and other needed equipment and told them, “try getting it yourselves.” In fact, Trump had followed that statement with an assurance: “We will be backing you, but try getting it yourselves. Point of sales, much better, much more direct if you can get it yourself.” Even after it became clear this was “fake news,” one obnoxious reporter at the press briefing brought it up again, using the incomplete quote.

MSNBC anchor Katy Tur was aghast that the president’s team stood too closely together on the dais, and that Trump and others shook hands and touched the microphone, setting a bad example for social distancing.

Others couldn’t stand that the president’s team complimented him. Charles Pierce wrote in Esquire that the “sad part” of the briefings is “watching all of these accomplished, brilliant people, the people who have dedicated their lives to solving epidemic diseases at the highest level, standing there behind a vulgar talking yam, praising him for his brilliant work thus far.”

The Paralyzing Hatred of the Media

I find it ironic that the people most critical of President Trump for being “vulgar,” “rude” and self-absorbed display those characteristics themselves as they wallow in their paralyzing hatred, unable to do their jobs because of their toxic obsession over President Trump.