What Does It Mean to Love Thy Body? Interview With Author Nancy Pearcey 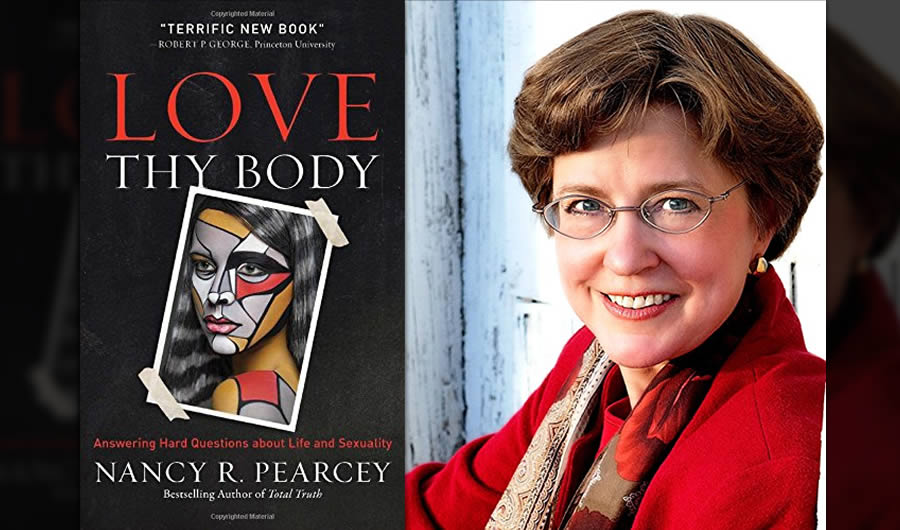 This week is the release of one of the most important books this year on Christianity and cultural engagement: Love Thy Body: Answering Hard Questions about Life and Sexuality, by Nancy Pearcey. Since co-writing How Now Shall We Live? with Chuck Colson, Pearcey has been one of the most important voices vying for the development and application of a Christian worldview to all of life. She is a professor of apologetics at Houston Baptist University and a fellow at the Discovery Institute’s Center for Science and Culture.

Her newest book is so timely and insightful that I am using it as a text for a high school class that I teach. She was kind enough to answer a few of my questions. Enjoy!

Sean McDowell: In the introduction to Love Thy Body, you discuss the fact/value split. Can you explain what you mean by that and how secular thought today assumes a body/person split?

Nancy Pearcey: After the rise of modern science, many people decided that the only reliable knowledge is empirical facts. Things like morality and theology were reduced to private, subjective preferences — personal values. We can visualize the fact/value split using the image of two stories in a building: In the lower story are objective facts; in the upper story are subjective values.

The fact/value split is one of the greatest barriers to presenting Christian truth today, and it’s the topic of my book Total Truth. In Love Thy Body, I show how the same split affects issues like abortion, assisted suicide, homosexuality, transgenderism and the hookup culture.

The body/person split has a fragmenting, self-alienating effect on the human personality. It’s a profoundly disrespectful view of the body.

Take abortion. Many bioethicists argue that the fetus is human from conception, but we do not grant it legal protection until we decide it has become a person. Until then, it is just a disposable piece of matter that can be killed for any reason or no reason. It can be used for research, tinkered with genetically, harvested for organs, then disposed of with the other medical waste.

This is called personhood theory, and you can see how it is an outworking of the fact/value split. Using our two-story metaphor, to be biologically human is a scientific fact (lower story). But to be a person is an ethical concept, defined by what we value (upper story).

The change from a piece of matter to a person with inviolable rights is a momentous change. Yet there is no transformative point that science can detect objectively. As a result, in secular ethics, the definition of personhood is private, subjective and arbitrary — like other personal values.

McDowell: How does the body/person split lie at the heart of other issues like euthanasia?

Pearcey: It’s the same body/person split, but in reverse: Bioethicists defend abortion by arguing that anyone who has not achieved a prescribed level of cognitive awareness is not a person. They justify euthanasia by saying if you lose certain cognitive abilities, you are no longer a person — even though you are obviously still human. At that point, you can be unplugged, your treatment withheld, your food and water discontinued, your organs harvested.

The upshot is that the sheer fact of being biologically human (lower story) no longer guarantees the most fundamental right — the right not to be killed. You have to earn the status of personhood (upper story) by maintaining an arbitrary level of neo-cortical functioning. This is a drastic devaluation of human life.

McDowell: You describe homoerotic behavior as profoundly disrespectful to the body. What do you mean? And how does this contrast with the biblical view?

Pearcey: It’s the body/person dualism again. No one really denies that biologically, physiologically, chromosomally and anatomically, males and females are counterparts to one another. That’s how the human sexual and reproductive system is designed. To embrace a same-sex identity, then, is implicitly to contradict that design — to say: Why should the structure of my body inform my identity? Why should my sexed body have any say in my moral choices?

This is a profoundly disrespectful view of the body. The implication is that what counts is not whether I am biologically male or female (lower story) but solely my mind, feelings and desires (upper story). The body/person split has a fragmenting, self-alienating effect on the human personality.

Those who defend a biblical view of sexuality are not relying on a few scattered Bible verses. They accept a teleological worldview in which the structure of the universe — including our bodies — reflects a divine purpose. The biblical ethic heals self-alienation and leads to a wholistic integration of personality.

McDowell: How is the body/person dualism expressed in transgenderism?

Pearcey: It is even easier to detect the dualism in arguments supporting transgenderism. The transgender narrative dissociates biological sex from gender, insisting that the authentic self is strictly a matter of inner feelings. Kids down to kindergarten are being taught their bodies are irrelevant to their identity.

In other words, if a person senses a disjunction between mind and body, the mind wins. But why? Why accept such a demeaning view of the body?

This is radically dehumanizing. For if our bodies do not have inherent value, then a key part of our human identity is devalued. The transgender narrative estranges people from their own body.

McDowell: Why is it important to see a human being as a psycho-physical unity?

Pearcey: The secular moral revolution is hailed as liberation, but in reality, it is expanding the coercive power of the state. How? By destroying pre-political rights.

Take abortion. In the past, the law recognized the right to life as a pre-political right that you have just because you are a member of the human race. The law did not create it, but merely recognized it. But the only way the state could legalize abortion was to deny the relevance of biology and declare that some humans are not persons. The state claimed the authority to decide arbitrarily which humans qualify for the fundamental right not to be killed.

Pre-political rights are being reduced to merely legal rights at the dispensation of the state. And what the state gives, the state can take away.

In the past, the state recognized marriage as a pre-political right based on the fact that humans are a sexually reproducing species. But the only way the law can treat same-sex couples the same as opposite-sex couples is to deny the relevance of biology and declare marriage to be just an emotional commitment. But there are endless varieties of emotional commitments, so the state has claimed the authority to decide arbitrarily which ones qualify as marriage.

The only way the law can treat a trans woman (born male) the same as a biological woman is to deny the relevance of biology and declare gender to a matter of inner feelings. The state has begun passing laws telling us whom we must call “he” or “she.”

Pre-political rights are being reduced to merely legal rights at the dispensation of the state. And what the state gives, the state can take away. Human rights are no longer “unalienable.”

McDowell: In chapter one, you say, “If nature does not reveal God’s will, then it is a morally neutral realm where human beings can impose their will.” Can you explain what you mean?

Pearcey: It helps to get some background on where the two-story dualism came from. The reason a secular ethic has such a low regard for biology is that it sees nature as a cosmic accident, a product of blind material forces, with no higher purpose or meaning. The human body has been reduced to a collection of atoms, cells and tissues, no different from any other chance configuration of matter.

The implication is that our bodies convey no moral message, give no clue to our identity, have no inherent purpose that we are obligated to respect. Instead we are the ones who decide what’s right or wrong. Morality is reduced to subjective choice.

Listen to how Camille Paglia defends homosexuality: “Fate, not God, has given us this flesh. We have absolute claim to our bodies and may do with them as we see fit.”

By contrast, a Christian ethic always takes into account the facts of biology, whether addressing abortion (the scientific facts about when life begins) or sexuality (the facts about sexual differentiation and reproduction). A Christian ethic treats the human being as a pyscho-physical unity in which body and person are both expressions of the unique self.

At the root of moral issues is the question: What kind of cosmos do we live in? Are we products of blind material forces, or are we the handiwork of a personal God whose bodies reflect his loving purpose?

Sean McDowell, Ph.D., is a professor of Christian Apologetics at Biola University, best-selling author, popular speaker, part-time high school teacher and Resident Scholar for Summit Ministries. Follow him on Twitter at @sean_mcdowell and his blog: seanmcdowell.org.