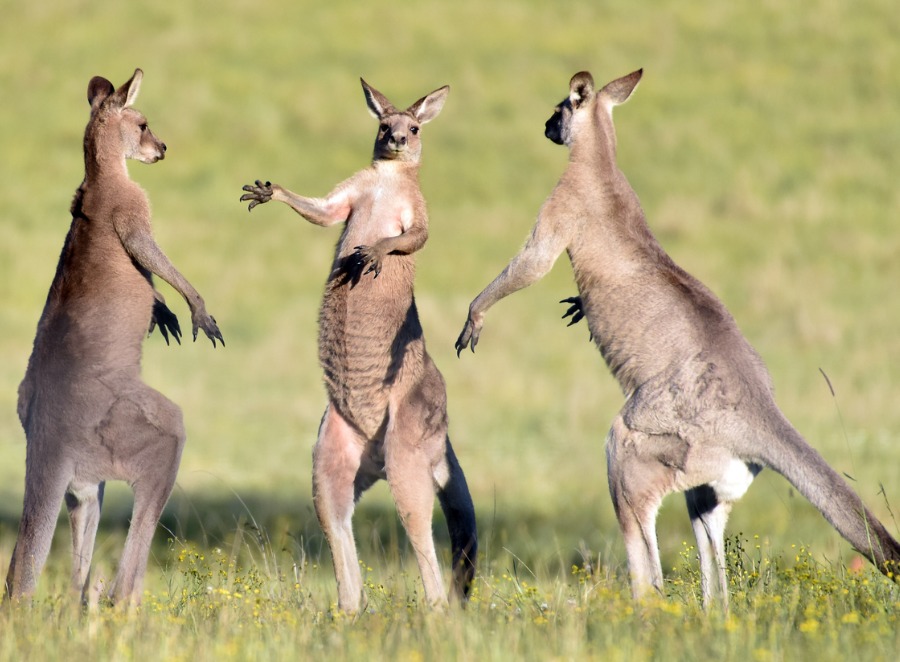 Democratic House Intel Committee members during a recess before heading back into secret impeachment hearings.

In breaking news, kangaroos have filed a class action suit against congressional Democrats, for giving their courts a bad name.

The House Judiciary Committee, traditionally the seat of impeachment inquiries, normally doesn’t conduct impeachment proceedings behind closed doors. But under Nancy Pelosi’s unofficial, non-traditional, fly-by-the-seat-of-your-pants inquiry, the proceedings were taken away from Judiciary Committee chair Jerrod Nadler, to be run by Adam Schiff’s Intelligence Committee, in the worst kangaroo court I’ve ever seen in the supposed land of the free. The Intelligence, Oversight and Foreign Relations committees are allowed behind the closed doors, while Judiciary Committee members are cooling their heels outside, unable to ask questions or even to hear testimony for themselves.

Why the change of committees, and why have we not heard from Nadler at all lately? Did Pelosi take away Nadler’s chairmanship because he didn’t show enough impeachment fervor? That is hardly possible, as this mouth-breather has been living and breathing impeachment since Trump got elected.

There must be some other reason or reasons why Judiciary has been left out of the proceedings. What if it wasn’t so much to put Adam Schiff IN as it was to keep certain Republican onlookers OUT?

Which brings us to Florida Rep. Matt Gaetz, a Republican member of the House Judiciary Committee. When he tried to sit in on Monday’s hearing — which of course, he would normally be able to attend — he was ejected. The House parliamentarian told him he couldn’t be there.

After leaving the room, he tweeted, “Judiciary Committee Chairman Jerrold Nadler claimed to have begun the impeachment inquiry weeks ago. Now, his own Judiciary members aren’t even allowed to participate in it. And yes — my constituents want me actively involved in the #KangarooCourtCoup run by Shifty Schiff. Chairman Schiff and the radical Democrats are are now active participants in the coup. To exclude Members of Congress from hearings confirms the American people’s suspicions: this is not a legitimate ‘impeachment inquiry’ — it is a charade.”

More: “Chairman Schiff and Speaker Pelosi are equally complicit in hiding and obfuscating the truth. Blocking Members of Congress from attending ‘impeachment’ hearings is not only unfair, it runs counter to our Democracy.”

And more: “The perpetrators of this impeachment hoax must be held accountable — both by the Congress, and by the American people.”

Monday night on Fox News’ Hannity, he said this was proof that the Democrats:

can’t win a fair election, they can’t win a fair debate, and they absolutely cannot run a fair impeachment inquiry because they’re stacking the deck. They’re doing everything they can to limit our access to witnesses and evidence, they’re not allowing us to call witnesses and, by the way, if Republicans had a witness list, it would be Adam Schiff who would be a fact witness because of the collusion that he and his staff were engaged in with the whistleblower that they had lied about…time and again we see that Adam Schiff is running a kangaroo court, and that should matter to senators who may have to ultimately consider this impeachment.

He pointed out that Bill Clinton wasn’t treated like this by Republicans. (That is true — Clinton had all the due process rights currently being denied to President Trump.)

“I think this is a shameful day for the House of Representatives,” Gaetz said.

On the agenda for Monday was the deposition of Fiona Hill, former special assistant to Trump and National Security Council senior director for European and Russia affairs, who resigned from the NSC during the summer. She testified under Congressional subpoena, though she had agreed to appear voluntarily. Schiff apparently subpoenaed her so he could ask certain questions and keep the answers secret (other than his own leaks, of course).

If Gaetz wanted to ask her any question or even hear what she had to say, he was out of luck. A fly on the wall had more access to these buzz-worthy proceedings.

Schiff explained the method to his madness on Sunday’s Face The Nation on CBS:  We want to make sure we meet the needs of the investigation and not give the President or his legal minions the opportunity to tailor their testimony and, in some cases, fabricate testimony to suit their interests.” He doesn’t want witnesses to know what other witnesses have said. In other words, they’ll be going after people for process crimes faster than you can say, “perjury trap.”

Ohio Rep. Jim Jordan, ranking Republican on the House Oversight Committee — which presumably gave him access to the hearing as long as he kept his mouth shut –- tweeted his criticism of Gaetz’ exclusion:

@RepAdam Schiff is conducting his secret impeachment proceedings in the basement of the Capitol, and now he’s kicked @mattgaetz out of today’s deposition. This testimony should be available to every member of Congress and every single American. What is Schiff hiding?

Jordan pointed out that only about 12 members of Congress have heard the testimony, while 423 have not and have no clue what is going on.  He urged Democrats to at least release the transcripts, which of course Adam Schiff will do in the interest of honesty and transparency and I lied about that last part.

Gaetz told reporters after being kicked out that he hadn’t gone there to participate, just to OBSERVE as a member of Congress and the Judiciary Committee. “If Adam Schiff and House Democrats were so proud of their work, they would be willing to show it.”

His next question was no doubt rhetorical, as, of course, anyone with more than a teaspoonful of brain matter knows the answer: “Why is Adam Schiff trying to run a kangaroo court? Why is he continuing to limit access to evidence, limit access even from members of Congress?”

No Testimony from Whistleblower

Incidentally, it turned out just as I thought it would, with Schiff saying they wouldn’t be needing testimony from the “whistleblower” after all. Schiff didn’t expect Trump to release the transcript of the call with Ukrainian President Zelensky, and now that the “whistleblower” has played his part to bring out the story, the last thing he wants is to subject this person to questioning. There is no way to reconcile his account of the phone call with the actual transcript.

Schiff especially doesn’t want any examination of this person’s anti-Trump ties, and the fact that he chose not to disclose in the complaint that he’d been in touch with Schiff’s office. This “court” is a bad joke — bad enough to get even kangaroos hopping mad.

Here’s an excellent segment from Monday’s Ingraham Angle on the whole idea of secret courts, featuring former special prosecutor Ken Starr, who knows a thing or two about impeachment inquiries and is greatly concerned about the way this one is being conducted.

It’s a Kangaroo Court, and Adam Schiff is Captain Kangaroo