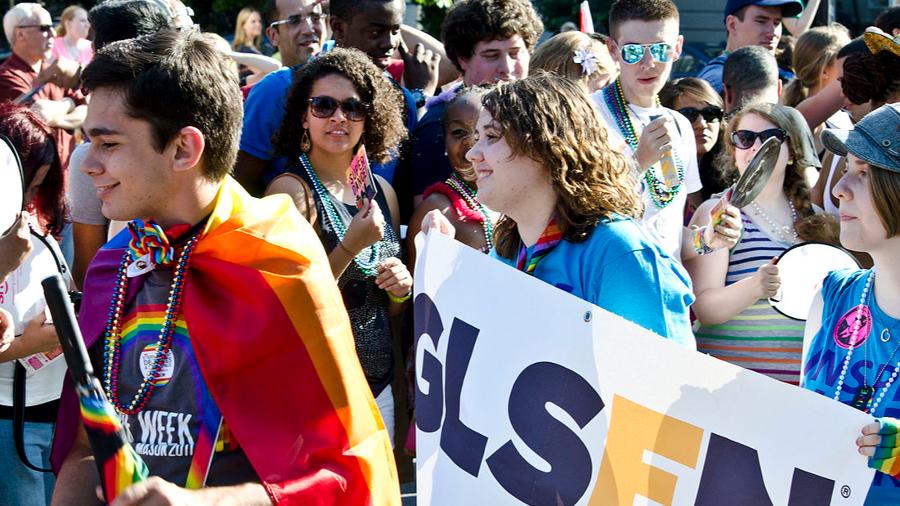 Unknown to the public, many states enlist national LGBT organizations to instruct elementary school teachers in how to push transgenderism (both “gender” ideology and transgender behaviors) and homosexuality to very young children. In Washington State (and many other locales), this is done through state-run “professional development” sessions that teachers attend to keep their certification.

Here we have a report from a MassResistance mother who attended and confronted the instructors with some hard questions. Their answers were very offensive and revealed their anti-family radicalism.

Elementary school teachers across Washington State were invited for the professional development Zoom seminar on October 28, 2021. This session was organized and run by the national LGBT activist group GLSEN, which clearly described what the training would cover.

MassResistance has long warned about GLSEN — the “Gay Lesbian Straight Education Network” and its founder Kevin Jennings. GLSEN now has a presence in almost every high school in America (and many middle schools) via its toxic “gay-straight alliance” student clubs. It is one of the main disseminators of LGBTQ propaganda and sexuality materials to schoolchildren.

Back in 1996, MassResistance reported how GLSEN pioneered the dishonest strategy of claiming that homosexual programs needed to be in high schools to make students “safe.” But that was just the beginning. It later became clear that the homosexual activists intended to use that argument to expand their reach down to the youngest elementary students, and to go beyond gay and lesbian propaganda to include transgenderism.

“Ready, Set, Respect!” uses the cover of anti-bullying, “anti-bias,” and respect to push LGBT “family structures” and “gender roles” to young children. It provides “tools to support elementary educators with these efforts.” But this seminar went much farther than that. It instructed teachers in how to normalize transgenderism in young children and gave strategies to keep parents from interfering.

A conservative teacher showed the invitation to a mother in our Washington State MassResistance group. The teacher registered, and the mother could then log in to the Zoom session. It got right down to business:

Identifying “trusted adults” kids can talk to. The session began with one of the presenters, a lesbian elementary school teacher, talking about the “support” that elementary schools should be setting up. The first step is identifying “open and accepting” staff members who can be the “trusted adults” with whom children can “safely” talk about LGBT issues — instead of their parents. In particular, this includes the guidance counselor, the school administrators, and especially teachers who put “LGBTQIA Safe Space” stickers on their classroom doors.

Helping with kids “coming out.” “We’ve actually had in my elementary school several fourth-graders come out since the beginning of the school year,” the presenting teacher said. “Some of them have told their parents about it, and some have not.” She said that she “walks a fine line” between helping kids be comfortable as LGBT, and having to deal with unsupportive parents who find out what she’s doing and accuse her of recruiting or grooming their child. This is a lot trickier in elementary schools than in high schools, she said.

Giving the kids LGBT books. She also said that another “quandary” with kids coming out is getting homosexual or transgender books into the child’s hands “that positively represent people they can identify with” versus parents who find those books obscene and objectionable. “Some parents can be really weird about that,” she said.

Ordering stickers, etc., from GLSEN. One of the GLESN representatives mentioned that teachers can order posters, stickers and other materials from the GLSEN “kits” to help with “barriers or complications that might come up” in working with children “coming out.” “You need to feel safe helping the students,” she said.

Question from MassResistance mother: “Isn’t it better to work with parents and keep them in the loop? I don’t understand why you would want to keep secrets from parents.”

GLSEN staffer claims that parents endanger the child: The GLSEN staffer basically answered that telling the parent puts a child “at risk.” She said, “A lot of students are not living in safe situations. So you want to be affirming in the classroom so that the student is able to learn and not putting the child at risk at home.” She said that if a child hasn’t “outed” himself to his parents, then the teacher is careful not to tell the parent. This includes not using the child’s “preferred” name and pronoun in front of the parent if the parent doesn’t already support that. In other words, the teacher makes a judgment that the parent is a possible danger to the child.

But they are the parents! If their child is thinking about these things and is going through a “transition period,” they need to be brought in because it’s their child. They’re responsible for the child, the whole package. They’re part of the child’s world. So if you’re working with a student, you should also be working with the parent.

When I was in high school, I had lots of friends who were gay or lesbian. I knew a lot of people who got kicked out of their house as teenagers because their parents were not supportive or OK with it. And I wouldn’t want to be the teacher that got a kid kicked out of their house because they weren’t out to their parents and I outed them. You have a responsibility of confidentiality to students just like a doctor or a counselor would have if they come to you and their parents don’t know. Yes, parents should be in the loop about things that involve their kids: If the child’s failing in a course, they should know. If the child’s doing great in something, or needs extra enrichment, they should know. But it you have a parent that’s very closed-minded, and potentially going to do physical, mental, emotional harm to that child if they find out, you have a responsibility to protect that child’s confidentiality. You don’t have a responsibility to the parent to out that child. Ethically, I just think you’re putting that child in harm’s way. I can’t find any way to justify that.

GLSEN staffer says “safety” is the priority: The GLSEN staffer added that the teacher might want to have a conversation with the administration about a child, but she wholeheartedly agreed with the presenter that “a child’s safety takes priority.”

Is the child capable of judging the parent? But more important, the parent has the child for the rest of their life, and teachers have them just temporarily for nine months or whatever. So I think there’s a missing step if you’re not connecting with the parent to help that child.

The answer uses more LGBT talking points: A GLSEN staffer answered that “In Washington state the law is very clear that the right to names, pronouns, and gender within the school setting belongs solely to the student and not the parent.” [NOTE: Actually the law only says that the child has the right to use a different name and pronoun in school. It does not prohibit disclosure to a parent.]

She also trotted out the unfounded narrative that “For transgender and non-binary kids, the rate of suicide and the rate of homelessness, I mean, it’s astronomical.” She added, “We’re talking about identity and not anything to do with academics.” (“Identity” is another unfounded concept which is foremost in these educators’ minds, replacing academics.)

About the “transitioning” of kids: Another GLSEN speaker started talking about the different ways that young children “transition” their “gender”:

Not every trans experiences the same things … They may wear the same clothes they wore before … they may change clothes. For me, I’m non-binary. My transition was changing my pronouns. But I dress the same, talk the same. … We’re talking about how that child views himself and whether that view, that identity, will be accepted by their parents or not, and whether that would put them in a harmful situation. It’s got to be the kid’s call.

That was the end of the discussion. After that, the main GLSEN presenter went into a slide show about all the different ways that the “Ready, Set, Respect!” Tool Kit can help the elementary school curricula and activities.

The LGBT movement’s frightening obsession with children and the lengths they are willing to go to achieve their goals are certainly revealed here. Their statement that parents who disagree or interfere with schools’ efforts to groom children into “transgenderism” are doing terrible harm to their own children should be scoffed at. But instead, it has become mainstream thinking in education circles and even among politicians.

Similarly, their statement that “transgender” children become suicidal when parents and others don’t accept their new “true identity” is the exact opposite of the truth. People often become desperate and suicidal when they realize that they’ve mutilated themselves chasing after a false and unachievable identity.

Note that the LGBT movement and the Left in general often lie about what “the law” actually says — so take care always to read it yourself.

And finally, keep in mind that groups like GLSEN are funded by major U.S. corporations. For example, every time you shop at Target or Walmart you are helping to pay for toxic programs like the one described here.