Maricopa County Audit Gets Back to Work 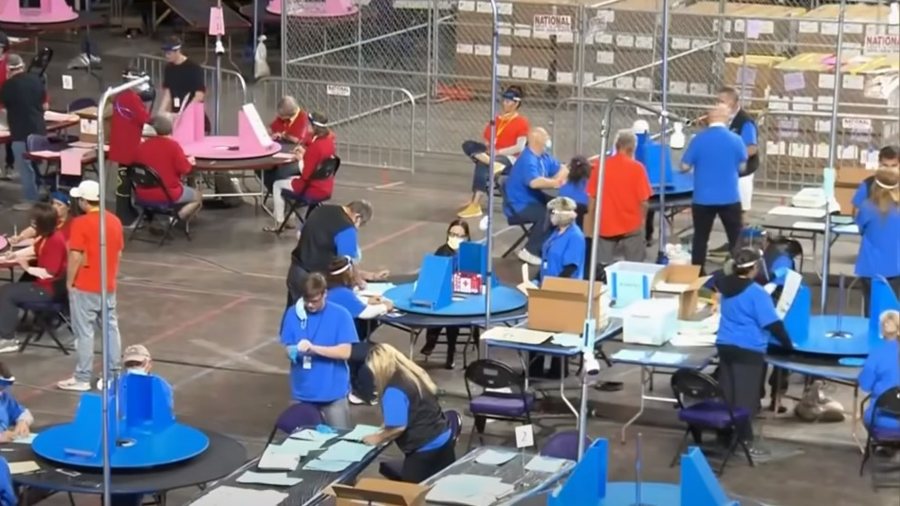 The Maricopa County election auditors, put in place by the GOP-led Arizona Senate, took a week away because of the high school graduation ceremonies taking place at the Veterans Memorial Coliseum in Phoenix. Now those events are over, and, as reported on Newsmax (story credited to Associated Press), auditors went back to work on Monday. The 2.1 million ballots had to be carted back over from a nearby building on the fairgrounds, where they’d been guarded 24/7.

I wouldn’t imagine that there’s been any problem with security. Imagine how many pairs of eyes were locked on those boxes of ballots every inch of the way.

Audit Operations Ramping Back Up

The audit team, which consists of four different firms with different responsibilities, are ramping up their operations, with more tables and counters added this week. Even with that, the operation still hasn’t reached full capacity. So they might speed up even more, though there is no deadline, just the goal of getting it right.

There are a few other differences as well. For example, journalists observing the audit have been advised that Senate liaison Ken Bennett, a former Republican secretary of state, will no longer be answering questions about the audit process. Instead, reporters will be directed to Arizona Republican Party Chairman Randy Pullen. We’re not sure why this change was made; it likely means nothing but we’ll check into it.

Anyway, even though auditors had some time off, the lawyers and politicians were working overtime, and it’s been, well, tense. We brought you the “special” meeting of the County Board of Supervisors, who unanimously supported a letter by the county recorder condemning the audit and vowing not to cooperate further. “We’re DONE,” they said. (The stunning YouTube video of that meeting is now under restricted access.)

Then there was the next-day meeting of auditors and board members Senate President Karen Fann had called, which the auditors attended but the board members boycotted. The idea behind that meeting had been to try to work together without more subpoenas, but that hope apparently has been dashed.

Heck, with the members of this board, even subpoenas and judicial orders don’t work. The lawyers advising them have apparently given them grand delusions of their own power.

This is not a “so-called audit.” It’s a real audit, it’s being handled well, and if these board members want to be taken seriously, they need to stop fighting tooth-and-nail against transparency.

The auditors’ claim that the main database had been removed from one of the machines was met with denial and outrage by the board, and CNN and AP reported that auditors walked back that claim. This was inaccurate, and technical forensic expert Ben Cotton of Cyfir, one of the companies performing the audit, wrote a letter to The Epoch Times to that effect. Cotton says that not only was the database deleted, but he has been able to recover it and is working on retrieving the information on it.

The claim that there are no legal grounds to conduct this audit is inaccurate as well. Senate Republicans had issued a subpoena for all the ballots, plus the voting machines and election data, and a judge upheld this, saying that Maricopa County needed to comply. So the board begrudgingly did, and now they won’t stop carping about it.

They’ve criticized the audit for being conducted by people who don’t normally audit elections, and “journalists” covering this story have stressed the point, calling them “unqualified.” But we think there’s a reason these companies ended up with the job, and it’s a political one. Reportedly, some companies that specialize in election audits have been intimidated from participating in what they’ve been told is conspiracy-theory nonsense. My understanding is that this issue is so politicized, there were companies that chose not to get involved, as it could damage or even destroy their professional relationships with clients. But as you’ll see, the auditors who did accept this mission seem to be doing a highly professional job.

Recovery of the Deleted Database

In another update, we now have a portion of the transcript from last Tuesday’s meeting with auditors and state senators (the meeting snubbed by the County Board), and Ben Cotton appears in video testimony. Shocking: he doesn’t appear to be a wild-eyed right-wing crazy, but a professional forensic analyst who knows what he’s talking about.

The media have been insisting that the fact the auditors were able to recover the information meant it hadn’t really been deleted — that they’d just been looking in the wrong place before it turned up. But it’s amazing what forensics investigators can retrieve that has been “deleted.” (That’s no doubt why Hillary’s aides were instructed to hit her devices with hammers.) Cotton said specifically that the “D” drive of the EMS Primary Server had been deleted. He said it was his extensive experience in data forensics that enabled him to recover the deleted files.

Cotton explains the procedure he followed during this segment of the transcript, as reported by The Conservative Treehouse.

(Editorial note: the headline for The Conservative Treehouse says Cotton accuses the media and board of “intentionally misleading” the public. We didn’t see anything in the story or in their video news report that talked specifically about intentionally misleading; i.e., lying. But reason tells us that they either were deliberately lying or are just such lazy, partisan excuses for journalists that they repeated the false story they wanted to tell. It’s one or the other.)

Cotton’s testimony about the data recovery is technical stuff, but it boils down to the fact that he was able to recover all the deleted files and has gained access to that data. (If I understand correctly, having “access” to the data doesn’t necessarily mean that all of it is readable; we’ll have to cross our fingers that the “data continuity checks” show that it is.) In the course of retrieving this material, Cotton said, he found clear indications — in the form of an MFT, or master file table — that the database directory had been deleted from that server.

Finally, members of the Board of Supervisors are now bringing their accusations to the media, in a full-court press to affect public perception of the audit. Specifically, county recorder Stephen Richer, who read a scathing prepared statement at last Monday’s board meeting and who wasn’t even in office during the November election, has taken his show on the road, going on ABC News Monday in an interview with Terry Moran to say there’s no “legitimate reason that would have prompted this audit.” He complained again that the companies doing the audit are not professional or legitimate. I beg to differ; we’ve been watching this drama play out, and the auditors seem to be the ones who are behaving professionally.

I’m not going to link to the article on Yahoo News about Richer’s interview, because it contains verbiage that I know not to be correct. For example, this is not a “so-called audit.” It’s a real audit, it’s being handled well, and if these board members want to be taken seriously, they need to stop fighting tooth-and-nail against transparency.

Maricopa County Officials Need to Remember They are ‘Public Servants’!