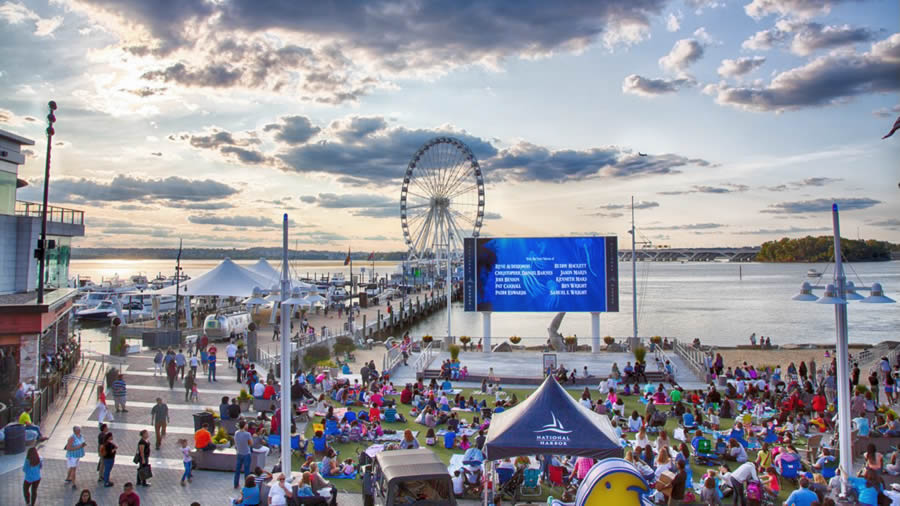 In this Sept. 10, 2017, file photo, families enjoy one of the last days of summer at the National Harbor in Maryland.

Federal prosecutors charged a man Monday with planning to commit an act of terrorism by driving a U-Haul truck into a crowd in National Harbor, Maryland.

The FBI arrested computer expert Rondell Henry, 28, of Germantown, Maryland, on March 28. He quit his job on March 26 with the intent to commit an attack inspired by Islamic State propaganda, according to Department of Justice.

BREAKING: Federal law enforcement officials have arrested Rondell Henry, who they say was inspired by ISIS, for allegedly planning to ram a stolen truck "through a crowd full of people" in Washington, DC pic.twitter.com/D71Ns33tLP

Henry stole a U-Haul truck and then drove around Washington, D.C., looking for a place with plenty of pedestrians, authorities say. He allegedly drove to Dulles International Airport in Virginia and contemplated driving the truck into “disbelievers” there, ABC News reported. However, authorities say he decided against this and drove to National Harbor instead.

BREAKING: Federal authorities have charged 28yo Rondell Henry of Germantown, Md., alleging he stole a UHaul van and planned to use it to run over a large group of people at National Harbor.

“He harbored hatred for those who do not practice the Muslim faith,” authorities say. pic.twitter.com/n9qScYnpqX

Henry told authorities that upon arrival in National Harbor he realized that it was too early in the morning and chose to wait until larger crowds arrived.

Henry parked the car in National Harbor and hid overnight in a boat, according to authorities. Meanwhile, after U-Haul reported the stolen vehicle, the FBI discovered the U-Haul and checked surveillance cameras. They discovered Henry who admitted to stealing the truck and his desire to carry out the attacks out of “hatred” for anyone who was not Muslim.

Members of his family reported him missing on March 26 and stated they were concerned for his emotional well-being, authorities say.

“He was a computer engineer by trade, and knew nothing of explosives or firearms. But he knew how to drive, and he also knew of the terrorist truck attack in Nice, France. So the defendant decided to use what was readily at his disposal and conduct a vehicular attack on a crowd of innocents,” federal prosecutors said in court documents.

Henry will appear in court for a detention hearing Tuesday and is being held without bail.

“We continue to gather evidence, as well as review evidence already obtained as part of this ongoing investigation,” U.S. Attorney for Maryland Robert Hur said in a statement.