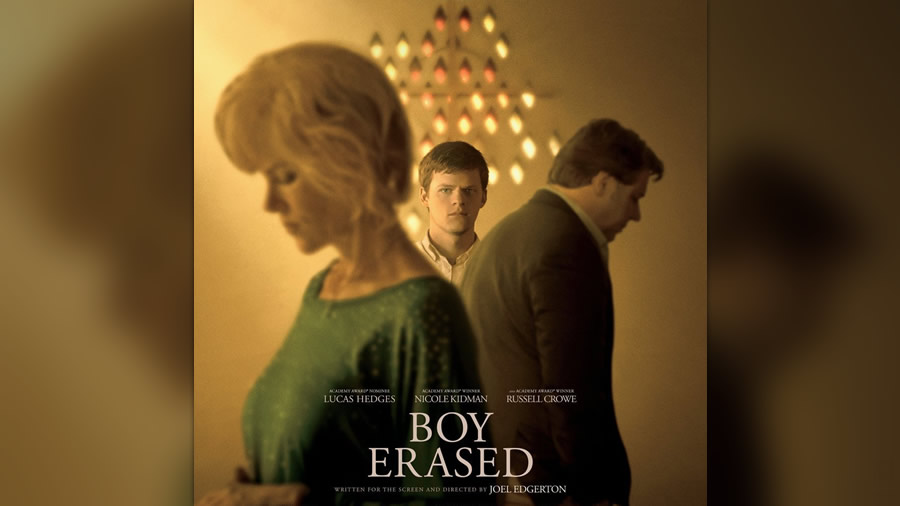 Today, the film Boy Erased is enjoying great reviews and limited release. If it’s not in a theater near you, within a few weeks you can bet it will be.

It’s the true story of a young man who went through what’s commonly called a “conversion therapy” program. He’s 19 years old, has just admitted to his Christian parents that he’s gay, and they insist he get help.

“Help,” they assume, will come through a program to which they’ll send him for weeks of daily group sessions and activities, allegedly designed to cure his homosexuality.

You can see where this is going. He eventually bolts from the program, accepts his identity as a gay man, and his parents — at least his mother, anyway — realize their error. Now, as an adult, he speaks against that damaging thing called Conversion Therapy.

I’ve read Gerrard Conley’s memoir, which the film is based on, having written a review of it for the Christian Research Journal which will be coming out next month. I’ve not yet seen Boy Erased but plan to soon. (Ironically, it stars my favorite actor Russell Crowe, and I never miss his films.)

But since I’ve received messages asking me for my take on the movie and the story behind it, let me make a couple points for now.

Help Under Pressure is No Help at All

According to his book, Conley was pressured to attend the Love in Action program in Nashville. Although he was 19 and under no legal obligation to go, he went essentially to appease his parents, calming their fears about his sexuality and spiritual state. He was also a believer himself, confused, certainly, but not without faith. So when it came to God and gay, he had concerns of his own.

None of which are good reasons to get counseling of any sort. For the past 31 years, I’ve disappointed parents who wanted to force their kids into the Biblical counseling I do, unwilling to take someone under coercion.

Sincere Moms and Dads who find their kids are gay often think that the right person, with the right testimony, will somehow change the kid’s mind. That simply doesn’t happen. It’s akin to paying for someone’s gym membership when they themselves don’t want to work out. The only thing that gets exercised is your credit card.

Besides, there is something violating about forcing, or even pressuring, anyone to get help you feel they need, but they themselves have no desire for.

While I unapologetically believe God never intended a person to be homosexually attracted, much less act on such attractions, I also know that everyone has God-given free will, granting them the right to decide for themselves how to express or not express their sexual feelings.

When I was gay-identified and sexually active, nobody could have persuaded me to change my views. I had to come to a point of believing I was wrong, a point no one but God Himself can bring a person to. So it’s better for the Prodigal Son’s parents to wait for him to return, rather than to try forcing a return he has no interest in.

You’ll see some bizarre “treatment” methods in Boy Erased. People are ordered to dress, sit, walk, and carry themselves a certain way. Behavior is regimented. Participants sit in a chair to be yelled at and shamed by the leaders. Evidently, dunking a person underwater (not as a baptism) is part of the cure as well.

Also unrecognizable to any of us who do this kind of work. While we never do, nor have, referred to it as “Conversion Therapy,” I and others have for decades had the honor of consulting with and walking alongside people who are same-sex attracted, want their behavior to match their beliefs more than their desires, hope to (in many cases) preserve their marriages and (in other cases) desire to explore their potential for heterosexual response.

We don’t yell at people. We don’t hit them with Bibles. We don’t (as some people amazingly charge) offer shock treatment as a bonus. We take Biblical principles and help people apply them to all aspects of their lives, sexuality included. We talk, we listen, we advise.

The fact that strange techniques are used to enforce a position is an indictment against the techniques, not the position. The belief that homosexuality falls short of God’s will is not an abusive belief to express, nor is it a self-hating belief to embrace. The fact that a belief has been practiced wrongly by some cannot be held against all who hold, and practice, that belief.

It Seems We’ve Stood and Talked Like This Before

I’m reminded of the 1972 documentary Marjoe, a scathing mockery of Pentecostal churches and faith healing, made by a man who’d been raised Christian, rejected it, and wanted to show the world what fools the people he used to associate with really were.

So he put on his preacher shoes, held revival and healing meetings, filmed the proceedings, then took the camera backstage and filmed himself mimicking the very people he’d just “ministered” to.

It was meant to make all Charismatics look like idiots. Yet the average Charismatic has never even seen a church service in which people behaved the way they did in the film.

And, I know full well, the average person doing ministry to same-sex attracted people has never even seen a counseling session in which people behaved the way they do in Boy Erased.

That won’t stop people from believing that Conley’s sad story represents all so-called conversion therapies. Well told stories persuade, even if the point they persuade towards is inaccurate. His story may well be true — I have no reason not to believe him and it is, after all, his story, not mine.

But that’s my point. It’s not mine. Nor is it everyone else’s. Which is why it won’t stop people from believing, by the grace of God, that He created us for more than what we feel, and that His intentions for our sexuality are of more importance than what seems most natural to us.

When I became a Christian in 1971, I experienced an engraving, the sort which was prophesied through Jeremiah when God said:

“I will put my law in their inward parts, and write it in their hearts; and will be their God, and they shall be my people.” (Jeremiah 31:33)

I am sorry to hear that any boy was erased, even temporarily. I wish Conley the best. But I’ve experienced something very different than he did. God’s laws were engraved on my heart in 1971, permanent and inescapable.

I tried ignoring them, but they, in concert with the Holy Spirit, would not be erased. Instead, they became more underlined with time, finally leading me out of a way of life Conley embraces, and into a way of life I have never regretted, and never will.

So may Conley, you, and I always be free to tell, and live out, our own stories.