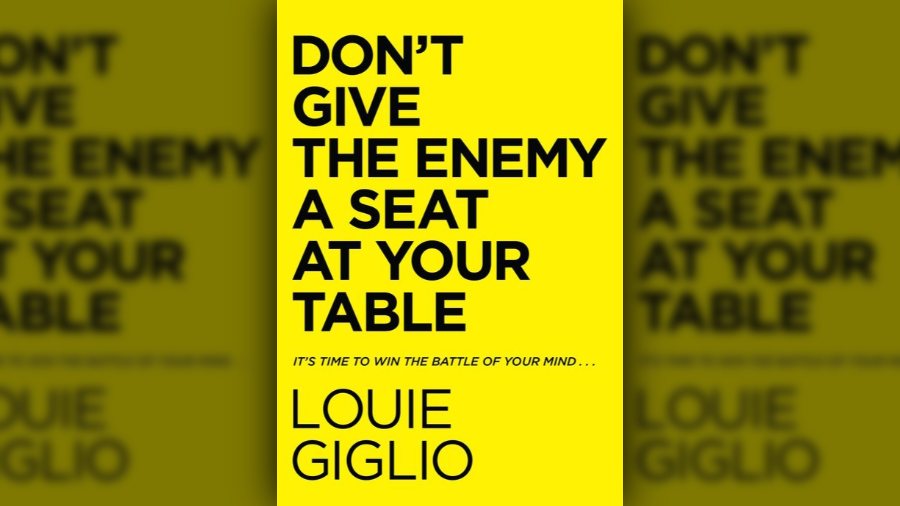 Pastor and author Louie Gigio is revealing the nine words that have truly transformed his life: “Don’t give the enemy a seat at your table.”

This statement had such a profound impact on the Passion Movement founder that he made it the title of his latest book, “Don’t Give the Enemy a Seat at Your Table: It’s Time to Win the Battle of Your Mind.”

Giglio believes people too often allow Satan to spout lies and sow confusion in their lives, so he’s on a mission to help Christians combat this dynamic.

Our Battle is Not Against Flesh and Blood

“There are spiritual forces at work every single day all around us,” he recently said on the “Edifi With Billy Hallowell” podcast. “We don’t struggle against flesh and blood, the scripture says, but against these powers, principalities, rulers of the age that [are] around us.”

Giglio, who said humans are living in the midst of a spiritual conflict and that the enemy is “pretty smart” when it comes to knocking people off track, pointed naysayers back to the scriptures.

“If you don’t believe that, just turn to the first page of the Bible and notice how quickly the enemy got into paradise and convinced Eve that God wasn’t for her, didn’t love her, didn’t have her best in mind and couldn’t be trusted,” he said. “That force wants to steal God’s glory directly and indirectly … and that’s the world we live in.”

Despite this spiritual battle, which is detailed by Paul in Ephesians 6, Giglio said people have the power and ability — through Christ and the holy spirit — to “win the battle of the mind.”

“Every one of us can change the story and we can start changing the story today,” he said.

This Phrase “Changed My Life”

Giglio is hoping those nine words — “Don’t give the enemy a seat at your table” — will inspire people to experience life change. The preacher said this powerful proclamation was given to him by a friend in the midst of a difficult time.

“I wrote the book … because this phrase actually changed my life,” he said. “I reached out to a friend who had walked through this whole thing with me.”

Giglio said his friend implored him not to give Satan “a seat” at his table. And the preacher said this simple reminder helped transform everything.

That’s when Giglio pledged to take back his thoughts, turning back to scripture to find solace.

Pushing Back Against Lies, Including “the Big Lie”

Giglio warned that Satan is good at planting lies in our hearts and minds.

“He’s going to come and plant a seed in our mind — ‘You’re not good enough,’ ‘God doesn’t love you,’ ‘You’ll never overcome this temptation’ … ‘No one cares about you,’” he said, explaining that these lies lead to fear, anxiety, doubt and anger. “Every single thing he tells us is a lie.”

But the preacher encouraged people to rally other believers around them in an effort to push back against these deceits and, more pointedly, dismantle “the big lie.”

Find out more in “Don’t Give the Enemy a Seat at Your Table: It’s Time to Win the Battle of Your Mind” — and listen to the full interview.