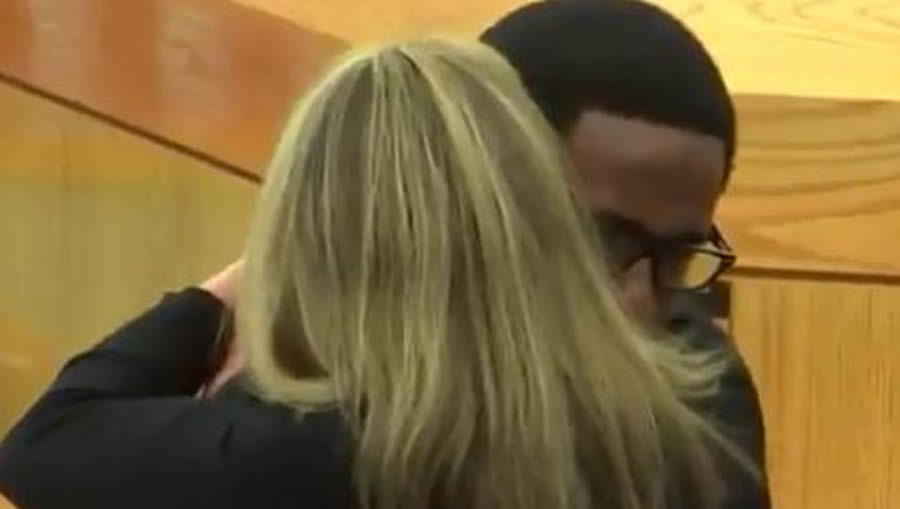 I’ve been overwhelmed lately with this “cancel culture” business. We’ve all made mistakes. We’ve all sinned, and we all will again. One of the great glories of life is that we can begin again. Our sorrow for our sins and awareness of our weaknesses keeps helping us get better and be better. But we increasingly forget this. More and more, it seems the loudest voices in culture won’t make room for growth and redemption. And so, people despair because they think they are stuck. And things on the news don’t help, as we’re all sucked into more terrible news and anger.

But did you notice the breath of fresh air recently? It was the day of the sentencing of former Dallas police officer Amber Guyger, who killed a man, Botham Jean, when she accidentally entered his apartment, thinking it was hers. I hope you’ve heard by now Jean’s brother’s testimony of forgiveness for Guyger. Brandt Jean said to Guyger in the courtroom: “I love you just like anyone else … I personally want the best for you.” He went on to encourage her to give her life to Christ.

And then, as you may have seen, he hugged her. That was the love of God he displayed, and he was able to do so because he’s clearly encountered it in his own life. And you don’t have to believe in God to have some awe and gratitude about so much that exists, including the incredibly complex and wonderful human person!

This message of forgiveness and the invitation to give your life to Christ is powerful. And you don’t have to be Christian to appreciate it. We need this kind of radical love and forgiveness in our culture and lives.

One of my favorite writings of Pope Paul VI is about proclaiming Christ in the world. In a sermon, the pope said of Christ: “He is like us but more perfectly human, simple, poor, humble, and yet, while burdened with work, he is more patient. He spoke on our behalf; he worked miracles; and he founded a new kingdom: in it the poor are happy; peace is the foundation of a life in common; where the pure of heart and those who mourn are uplifted and comforted; the hungry find justice; sinners are forgiven; and all discover that they are brothers.”

Another graceful moment came around the same time, but under much lighter circumstances. It was on late-night television, if you’ll believe that. Patricia Heaton was being interviewed by Stephen Colbert on The Late Show about her new comedy series, Carol’s Second Act. Colbert and Heaton had bonded during a previous interview about their shared Catholic faith. They had a lot of fun with it last time, and this time the conversation turned much more reflective.

With joy radiating from her, Heaton talked about getting older and taking stock. She talked about giving up drinking, having come to realize it was both a little too much and completely unnecessary. She thanked the audience for applauding that news because she said some of her friends were disappointed, thinking she wouldn’t be as much fun sober. We all make people feel uncomfortable when they try to seriously examine their lives and ask difficult questions.

They say God writes straight with crooked lines, that He works in mysterious ways. How many of us know that to be true? And, goodness, did I see that truth the night I happened upon Brandt Jean’s witness, and Heaton’s, too. They reminded me of this important fact: that love is for the unthinkable times and for the everyday.

We need more reflection, self-awareness and mercy in the world. People feel like they are drowning. We’re in this together. Lend a hand to help someone above water, if even for a moment. It may make all the difference. I woke up one morning after seeing Jean and watching Heaton thinking: Can we give one another a break already? Can we encourage one another while it is still today?

Thanks be to God for cultural moments that help us see and be light when there is so much darkness.