Lincoln Down the Memory Hole? 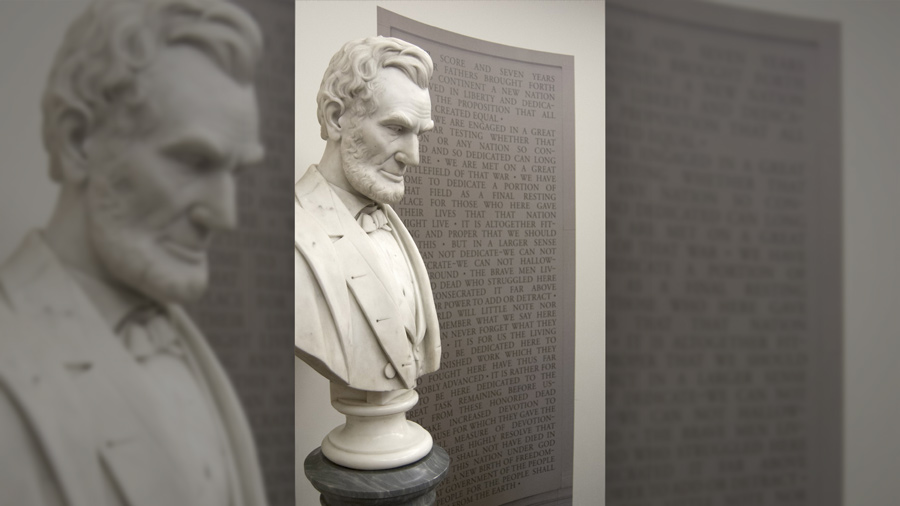 Cornell University Library posted this picture of the now-removed Lincoln bust and accompanying Gettysburg Address on their Facebook in Nov. 2013.

Just about every week seems to bring some new attack on American history. Now at Cornell, an Ivy League School, a bust of Abraham Lincoln has been removed from the library, along with a display of his Gettysburg Address.

Writing for The College Fix, editor-in-chief Jennifer Kabbany notes, “Someone complained, and it was gone.”

A biology professor who visits the library often was surprised to notice the display was missing. Kabbany writes,

He asked the librarians about it, and they had no details to provide, except to say it was removed after some sort of complaint, he said. It’s been replaced with, ‘well, nothing,’ Wayne said. The walls are white, according to photos Wayne took for The Fix. The bust and plaque had been on display in the library since at least 2013.

The War on American History

A few years ago, Jarrett Stepman of the Heritage Foundation wrote a book on this ongoing phenomenon. It’s called, The War on History. I have often interviewed Jarrett on the radio about this ongoing quest to purge our heroes or historical figures. He told me: “Unfortunately, it should come as no surprise to see an Ivy League school remove a bust of Abraham Lincoln after receiving a complaint.”

It’s hardly just Confederates who are in the crosshairs of woke social justice warriors. It’s Lincoln’s legacy — and the whole history of the United States — that’s on trial too. Our country’s greatest heroes and achievements have been judged and deemed wholly insufficient by the nation’s institutional pseudo elite. Of course, this new “elite” has accomplished little other than leading the country into a cultural morass while kicking countless great Americans off their pedestals.

Karl Marx is reported to have said, “Take away a people’s roots, and they can easily be moved.” His followers on college campuses, both among the faculty and students, and Marxists in the media and other major American institutions today are doing much to try and separate us from our history.

‘Down the Memory Hole’

I’ve been re-reading George Orwell’s 1984 recently. This nightmare vision shows a future under a full Communist regime. Big Brother, patterned after Stalin, controls everything and everybody.

In this totalitarian society, history is constantly being re-written, because maintaining the present “demands a continuous alteration of the past.”

Winston, the chief protagonist of 1984, has a job in which he is given stories from the past which must be rewritten (to tell a different story). Then he must stuff the old documents through a pneumatic tube “down the memory hole,” into a huge furnace in the bellows of the building.

If you make the criterion that the only statues that can stand should be for those who don’t offend anybody, then there would be very few such icons.

With the First Amendment, including the freedom of speech, how can there be a supposed constitutional right “not to be offended”? But as The College Fix noted of the Lincoln bust and speech, “Someone complained, and it was gone.”

Gary Bauer opined on why the number U.S. military recruits are down so much these days:

[O]ur academic, cultural and political elites are constantly telling our youth how terrible America is. “America has never been great,” they say. They claim America was founded on genocide and slavery. In fact, America is so evil, they insist it must be “fundamentally transformed.” You don’t “fundamentally transform” something you love. Young people won’t fight and die for a country that they are taught is evil.

Why does American history matter? It matters because we can learn from the past. We can avoid mistakes made by previous generations. And we can also be inspired by their brilliance and wisdom — even if they, like all of us, had blind spots.

A Framework by Which Errors Can Be Corrected

American history is flawed. The founders didn’t get it all right, but they set up the framework by which our errors could be corrected. Above all, they gave us self-rule under God.

Meanwhile, isn’t it fascinating that Marxists are behind the ongoing attempts to jettison American heroes from our past? Look at their track record. Harvard University’s Black Book of Communism documents the incredibly bloody record of the Communists in the 20th century alone. At least 100 million human beings were killed by a system that always fails because it goes against human nature and against God.

In contrast, in his Gettysburg Address, Lincoln pointed the way to what we need so desperately, “that this nation, under God, shall have a new birth of freedom — and that government of the people, by the people, for the people, shall not perish from the earth.”