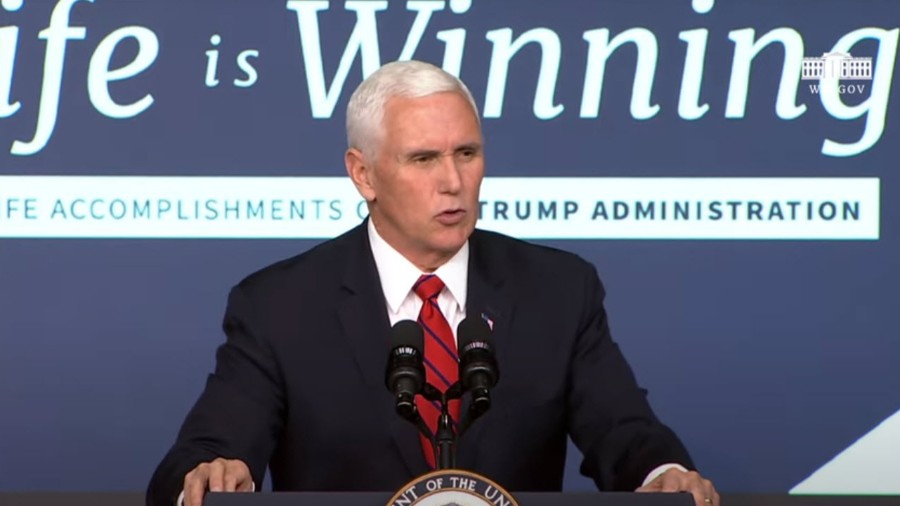 President Donald Trump’s administration has been all about protecting and fighting for the right to life, Vice President Mike Pence said Wednesday at an event at the White House; "I had the honor of casting the tie-breaking vote in the United States Senate to allow every state in America to defund Planned Parenthood and President Trump signed it into law."

President Donald Trump’s administration has been focused on protecting and fighting for the right to life, Vice President Mike Pence said Wednesday.

“President Trump said early in our administration, and I quote, ‘Every person is worth protecting. Every human life, born and unborn, is made in the holy image of Almighty God,’” Pence said.

“And this administration has always been about life. And that’s been evident in the last year as our nation has passed through this challenging time of a global pandemic.”

Pence’s remarks were delivered at a “Life Is Winning Event,” where the vice president highlighted the Trump administration’s pro-life accomplishments with leaders of the pro-life movement, including Marjorie Dannenfelser of the Susan B. Anthony List, Tom McClusky of the March for Life, David Daleiden of the Center for Medical Progress, and Abby Johnson of And Then There Were None.

He also said he was proud of making history with Trump, who gave him “the great privilege in our very first month in office to be the first vice president in history to ever address the March for Life on the National Mall,” Pence said.

“And this last January, he did it himself,” he added.

The vice president also said he was proud of the administration’s work to remove Title X funding.

Title X is a program that offers family planning and related services to low-income Americans at minimal or no cost.

“Before we took office, as you all know, that the largest abortion provider in America was also the largest recipient of federal funding under Title X,” Pence said.

Pence said the Trump administration witnessed, “along with the American people, … the undercover videos that showed horrific conversations about the sale and transfer of parts of aborted babies,” Pence said, alluding to the videos released by Daleiden and the Center for Medical Progress.

There is no financial benefit for tissue donation for either the patient or for Planned Parenthood. In some instances, actual costs, such as the cost to transport tissue to leading research centers, are reimbursed, which is standard across the medical field.

“It’s just unconscionable,” Pence said. “But thanks to President Trump’s leadership, in March 2017, I had the honor of casting the tie-breaking vote in the United States Senate to allow every state in America to defund Planned Parenthood and President Trump signed it into law.”

On March 30, 2017, Pence, serving in his role as president of the Senate, cast a tie-breaking vote for a measure that rolled back a regulation, instituted during President Barack Obama’s presidency, that did not allow states to exclude abortion providers from Title X funds. Trump signed the measure into law in April of 2017.

Pence also said Trump’s commitment to the judiciary is another accomplishment the administration is proud of.

“President Trump promised the American people, he said, quote, ‘I will protect life. And the biggest way you can protect it is through the Supreme Court and putting people in the court,’ he said,” Pence said. “And he promised, ‘I will appoint judges that will be pro-life.’ And that’s just what he’s done.”

“With yesterday’s confirmation of the judge [that] will fill the seat of the newest justice on the Supreme Court, President Trump has appointed more than 220 conservatives to our federal courts at every level, including Justice Neil Gorsuch, Justice Brett Kavanaugh, and Justice Amy Coney Barrett,” he added.

On Tuesday, the Senate confirmed Thomas Kirsch 51-44 to a seat on the U.S. Court of Appeals for the 7th Circuit. The seat was left vacant when Barrett joined the Supreme Court.

Pence was joined at the event in the Eisenhower Executive Office Building by Brooke Rollins, assistant to the president and director of the White House Domestic Policy Council; Russell Vought, director of the Office of Management and Budget; Alex Azar, secretary of the Department of Health and Human Services; Bill Steiger, chief of staff of the United States Agency for International Development; and Kayleigh McEnany, White House press secretary.

McEnany shared a personal memory of Trump that she said illustrated his personal commitment to and support of life.

“I’ll tell you what this president did when he first offered me the job,” McEnany said.

“He said, ‘Is your daughter going to be OK?’ because he is a president that supports moms,” she said, adding:

He’s a president that supports life. And there’s been no greater partner for him in that endeavor than Vice President Pence, who’s been an unmistakable voice for life from the very beginning.

Pence asked the pro-life leaders to continue in their mission.

“So do not grow weary of doing well, because in the last four years we’ve shown when men and women of faith and conviction come together to stand up, … to speak out for the voiceless, life can win in America,” Pence said. “And with your help and God’s help, life will keep on winning in the United States of America.”