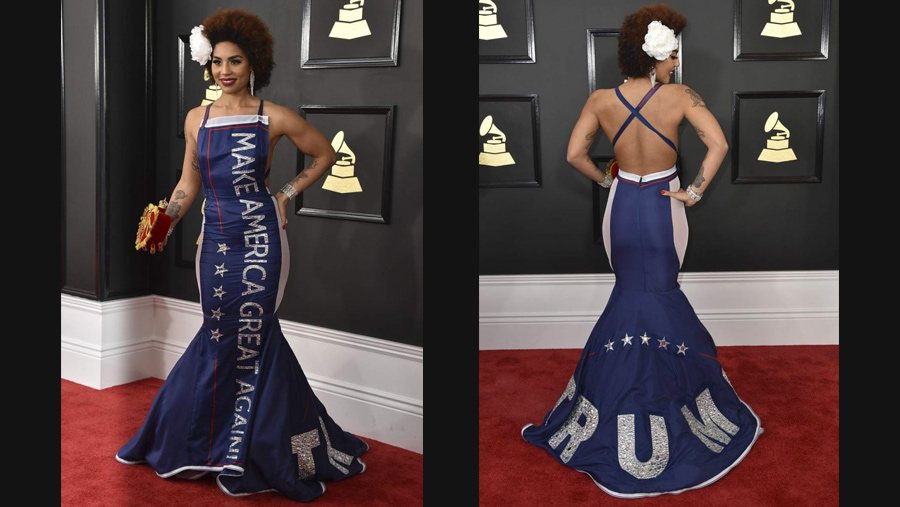 Joy Villa made one heckuva statement at the Grammys Sunday night.

“Sometimes you just gotta be free to express yourself,” she wrote on Twitter.

It was a truly remarkable moment of diversity and inclusion in Hollywood — one that will surely land the relatively unknown performer on the Worst Dressed List.

“I don’t care what your politics are, this girl is bold — and might I add, beautiful,” he said.

She did look stunning — and patriotic.

The dress was designed by Andre Soriano, a Filipino immigrant who came to our shores in search of the American dream.

“I’ve never been in the political area,” Soriano told The Hollywood Reporter. “However, it’s just so crazy that people are getting beat up because they voted for Trump.”

Mr. Soriano was inspired to create his masterpiece after watching the “Nasty Woman” protest in Washington, D.C.

“I am an American,” he told THR. “I moved here from the Philippines and I highly believed in the trueness of what this country can bring. It’s about bringing people together, that’s the message.”

It’s worth repeating that Mr. Soriano came to America legally.

Unfortunately, the red, white and blue dress is not available at Nordstrom’s, Sears or TJ Maxx. Sorry, fashionistas.

Liberals suffered a near melt-down on social media. Much of the vitriol is simply too vile to share in a family-friendly column.

I reached out to the Centers for Disease Control but they did not have any data on how many Grammy watch parties were ruined by triggered liberals.

I will say this about Miss Villa — she’s got moxie — either that or she’s slap crazy.

Wearing a Donald Trump dress at the Grammys? Sweet mercy, America. That’s like showing up at a PETA protest eating a cheeseburger.

Todd Starnes is host of Fox News & Commentary, heard on hundreds of radio stations. His latest book is The Deplorables’ Guide to Making America Great Again. Follow Todd on Twitter @ToddStarnes and find him on Facebook.