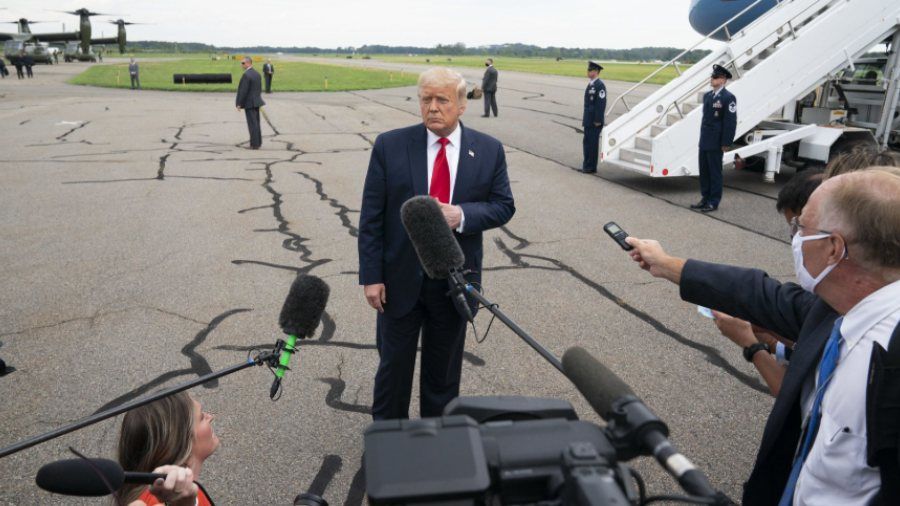 President Donald J. Trump talks to members of the press Friday, Aug. 14, 2020, at Morristown Municipal Airport in Morristown, N.J., prior to boarding Marine One for his flight to New York City. (Official White House Photo by Joyce N. Boghosian)

The left remains so preoccupied by its hatred of all things Trump that objective journalism remains beyond the reach of most mainstream news outlets.

A recent article in The New York Times about state election reform proposals perfectly illustrates the phenomenon. In the wake of a presidential election marred by widespread lawlessness that produced unprecedented levels of public distrust, the Times struggles to conceive of efforts to rectify the problem as anything other than acts of obeisance to Donald Trump. In the minds of most leftists, it seems, the term “election integrity” — when used by Republicans — is merely code for “voter suppression.” Bad faith on the part of GOP legislators is simply assumed.

In reality, conservative voters and lawmakers have many legitimate reasons to question the security of our electoral process after watching leftist officials participate in an extra-legal public-private partnership with Big Tech billionaires and progressive activists that involved casually disregarding duly enacted laws that had been put in place for the express purpose of ensuring free and fair elections.

Similar myopia distorted coverage of President Trump’s phone call with Georgia’s top election investigator. Articles from outlets such as The Washington Post relied on anonymous sources to paint a nefarious picture of the call, but as we now know from an audio recording of the call, the unnamed source grossly distorted the former president’s words. Phrases such as “find the fraud” have been floating around for months due to the credulity of the Post and other publications, but in reality President Trump merely encouraged the investigator to focus on ballots in Fulton County, predicting that officials would find “dishonesty” there.

What Trump said was a far cry from what was widely reported, and the error was due entirely to the willingness of liberal reporters to take unverifiable assertions at face value because they aligned with the reporters’ preconceived notions. That’s not responsible journalism — it’s not even responsible punditry.

Left-leaning outlets routinely resort to straw man arguments by haughtily declaring that “multiple studies” show that voter fraud “barely exists,” or that judges have “rejected” conservative challenges to the 2020 election. Of course, rigorous academic studies would necessarily have to rely on data from elections prior to 2020, and there is nothing meaningful to be gleaned from the fact that judges refused to hear the evidence presented in election integrity lawsuits filed after the 2020 election.

Besides, there is ample evidence of voter fraud, if one is actually looking for it. Just recently, Texas charged four individuals with a combined 150 counts of voter fraud involving “ballot harvesting,” tampering with government records, and fraudulent use of absentee ballots.

In Wisconsin, officials allowed voters to exploit a loophole intended for ill and disabled residents by stretching the definition of “indefinitely confined” to include anyone who preferred not to vote in person on Election Day, allowing people to circumvent the legal requirement that they provide photo identification to vote absentee. In Michigan, Pennsylvania, and Georgia, election officials used grossly distorted definitions of statutory language to prevent Republican poll watchers from exercising meaningful oversight of the counting process, which is supposed to be guaranteed to both major parties under those states’ election laws. In Michigan and Pennsylvania, Democrat secretaries of state grossly exceeded their authority in order to facilitate mail-in and absentee voting, even granting leftist activist organizations direct access to state voter rolls.

Most egregiously, perhaps, state and local officials accepted hundreds of millions of dollars in private funding from Facebook founder Mark Zuckerberg — often in violation of state laws explicitly prohibiting the use of private monies for election administration — and used it to rewrite election rules without input or authorization from state legislatures.

The effort was so successful that Democrats in Congress are redoubling their efforts to pass legislation designed to compel every state in the union to codify these changes and repeal existing ballot security laws. Republicans, unsurprisingly, are working at the state level to strengthen ballot security laws and close the loopholes that the left exploited in 2020.

Neither side is pursuing its agenda in bad faith — the two parties merely have different perspectives on the right way to strengthen our democracy. This isn’t surprising, since our system of government is designed to pit opposing ideas against each other and arrive at political outcomes through dialogue and compromise.

A Force for Good

If journalists viewed things that way, they could serve as an indispensable force for good, helping to cut through the noise of partisan rhetoric and educate the American people about political issues. Unfortunately, most journalists today are far more likely to let blind hatred of Donald Trump distort their own understanding of politics, leading them to echo partisan attacks rather than elucidate the truth.

Ken Blackwell is a senior Fellow for Human Rights and Constitutional Governance at the Family Research Council. He is former Secretary of State of Ohio.