Liberal Church: ‘Jesus Was a Person of Color Murdered by State Sanctioned Violence’ 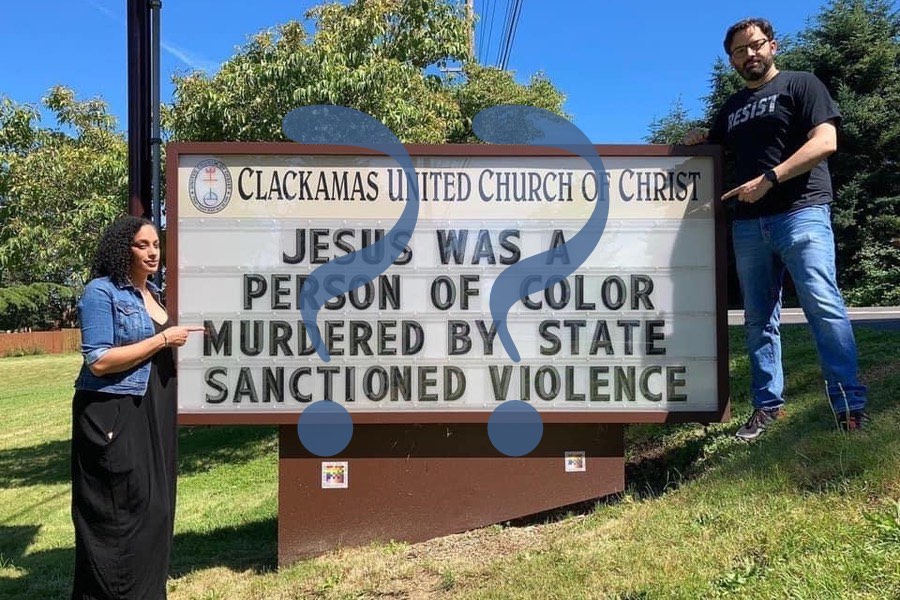 Clackamas United Church of Christ, a very progressive church in Milwaukie, Oregon, posted this sign on their marquee: “Jesus was a person of color murdered by state sanctioned violence.” A fellow member of a Facebook group I’m in asked what we all thought of it.

Yet it could have been so good. It’s so close, I could weep. There’s some real truth hovering right near it, a great message they could have sent if only they’d tried. I know, because I’ve been in a place to learn it.

The Message They Could Have Sent

My cousin Jeanette was murdered when she was 35 years old. It was brutal. At a time like that you have to, “Where was God?” There’s no easy, quick answer. As I was praying it through, though, it hit me: Jesus Christ was killed, brutally, unjustly. God the Father watched his Son die that way. Whatever questions we may have, we know this much: God is in it with us all the way. He’s involved. He loves. He cares, and he hasn’t left us to suffer alone.

That’s almost the message this sign sends. If only. It could have been a word of encouragement to friends and family members of the handful of unarmed black men shot by police officers in the last year or two. It could have been a reminder that God is with them, their families, and anyone else who identifies with their loss and pain.

Jesus was superbly anti-racist, too. The Jews hated the Samaritans and looked down on the Gentiles, partly for racial reasons, but especially for religious ones. Jesus busted that up by ministering in Samaria, Tyre, Sidon, and the Decapolis. In Luke 4 he reminds His hometown crowd of God’s love for Gentiles, and they get so angry, they try to toss him over a cliff for it. He chose a Samaritan as the good guy in one of his most famous parables.

Clackamas Church could have sent that message, too. Maybe they have, in other times and places. Not here, though. This one twists Jesus’ life to their political ends. The two halves of the signs messages are both true; that much I’ll grant. In context of today’s culture, though, it distorts the truth in at least two ways.

First, Jesus was not a “person of color” in any  sense relevant to the situation we’re in today. He was a member of the dominant race and religion, whose leaders had Him executed. His killing had nothing to do with race, nothing to do with being in the disadvantaged place in society. It had everything to do with authority conflicts (from an earthly perspective) and God’s purposes (from the wider point of view).

Second, police shootings are not “state-sanctioned violence.” Many are justified actions, the police defending themselves or innocent civilians from imminent danger of being killed. In the small number of exceptional cases, the state very, very rarely sanctions anything; the officers are charged and put on trial for it.

It’s Foolish to Try Claiming Jesus for Your Cause

So in context it’s a lie. It’s a pompous one; a lie delivered almost with a smirk of condescending superiority. It’s politicizing lie, too. They’re patently out to grab Jesus and make Him their movement’s mascot. Jesus doesn’t go for that. He never let anyone set His agenda, never let anyone claim Him for their own. In Luke 4 he refused to let Nazareth own Him as their hometown boy. Elsewhere some of the Jews tried to make Him their king, and He resisted, saying in effect, “Not that way, not at this time. I will be king, yes, but King over all, not just the Jews.”

Jesus refuses to let anyone call Him their own. It’s dangerous to try. He’s on his mission for His purposes, never for ours.

And by the way — if you really want to follow Jesus as your forerunner as an unjust victim, consider how He acted in his trial and execution. Not much like what we’re seeing in the current protests, is it?

How Not to Make the Same Mistake

Obviously, though, that raises a question for evangelicals and conservative Catholics. Everyone knows how tightly aligned our politics is to our religion. Could we be making exactly the same mistake as the progressive Clackamas Church? Could we, too, be guilty of co-opting Jesus to our political purposes?

Of course we could. I’m sure some evangelicals are guilty of exactly that mistake. We could steer clear of that, though, by avoiding the Clackamas church’s two big mistakes: dishonest manipulation, and trying to recruit Jesus to our cause.

Jesus refuses to let anyone call him their own. It’s dangerous to try. He’s on his mission for his purposes, never for ours.

Maybe the Clackamas Church thinks it’s doing that, too — but no, let’s be real. Their “What we believe” page honors contemporary books and movies as much as the teachings of Jesus. (They’ll still co-opt him for a political message, though.)

Trying Imperfectly? Sure. But At Least Trying

Maybe conservative Christians aren’t doing it as perfectly as we think we are. Maybe some really do have it upside down, too, fitting their religion to their politics.

Most of us are at least trying to do it the right way, though. Sure, we’re not perfect. Trying imperfectly to follow Jesus is still trying to follow Him, and better than not trying at all. It’s certainly better than Clackamas Church-style pretense.

And that goes for our politics as much as anything else.

God is Not a Christian