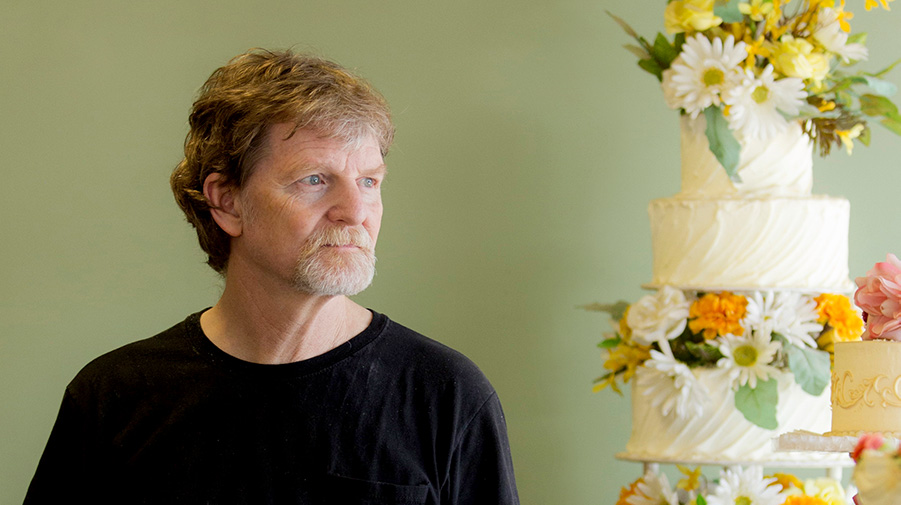 Jack Phillips stands for a portrait near a display of wedding cakes in his Masterpiece Cakeshop in Lakewood, Colo., on Thursday, Sept. 1, 2016. Even though he won a huge victory at the Supreme Court, a transgender lawyer is again dragging him to court.

Growing up in the 1950’s and 60’s and reading what Revelation says about the persecution of Christians in the end times, I could only imagine that such apocalyptic scenarios must be way, way off in the future. Surely beyond my lifetime. We didn’t know anyone who didn’t go to church. I couldn’t fathom how our culture could change that deeply and rapidly.

There was a little tension between Catholics and Protestants, but believing in God and going to church was not only acceptable, it was respectable. Even culturally expected in some parts of the U. S. If you didn’t, you kept it quiet.

Today Christians are being asked to get out of town. Most recently, Franklin Graham and Samaritan’s Purse were publicly excoriated for their views on Biblical sexuality and marriage after setting up a field hospital in Central Park that helped over 300 COVID-19 victims fight the disease. On May 1st the openly gay Speaker of the New York City Council declared, “It is time for Samaritan’s Purse to leave New York City. … This group … is led by the notoriously bigoted, hate-spewing Franklin Graham.”

The sexual revolution of the 60’s continues, and its consequences are increasingly invading the lives, families and jobs of Christians.

A Michigan church has offered a workshop designed to help girls 12-16 who are “struggling with the thoughts that they are Trans – Bi – Gay – or other “ to understand “what the Bible teaches about sexuality.” The pastor of the church and his family “received death threats, arson threats, and bomb threats from LGBT advocates.” Michigan lawmakers labeled the workshop “conversion therapy,” demanding the state investigate and proposing legislation to make such workshops illegal.

The heavy-handed persecution of Colorado baker Jack Phillips for being willing to serve gay couples anything in his store, but refusing to create a cake that makes a statement that violates his conscience (a wedding cake for gay marriage) is well known. Even after the Supreme Court ruled in his favor, a transgender lawyer filed against him again to create a cake to celebrate his/her gender transition. Phillips counter-sued for harassment and the case was dropped.

But just last month Phillips faced the same lawyer again in court. This time he/she wanted a birthday cake, one half blue and one half pink, that celebrates not only the lawyer’s birth day but the “birth date” of the transition from male to female. The litigation and persecution, begun in 2012, goes on.

Parents’ concerns over the increasing tension between public schooling and a Christian worldview, including values about sexual morality, are prompting increasing numbers to home school their children. This too may result in growing persecution. (More in my next post.)

The LGBT activists’ desire to persecute Christians like Franklin Graham, the Michigan pastor, Jack Phillips and Bible-believing parents flow logically from how they think about Christ followers. They insist we are haters and bigots. And yet the way they treat their own children gives the lie to their own words. Every parent experiences those moments where your child disagrees with you. And the older they get, the more good reasons they may have for disagreeing with you.

As Franklin Graham and Samaritan’s Purse have shown the world, we can disagree on the goodness of LGBT sexual behavior and still love them and accord them true respect as fellow travelers made in the image of God. We see them through the eyes of Jesus Christ, who loves them and gave himself for them. We can serve them and sacrifice for them because we care deeply for them. But disagree on the standard of sexual morality. This is not hate. This is not fear or “homophobia.” It is love with respectful disagreement. Where do we see this in the LGBT community?

Neither are we bigots. A bigot is someone who sees and treats others according to his own personal opinions and prejudices. Holding to God’s standard of sexual morality may mean for many of us that we honor his word more than our own opinions. If it were not for God’s Word I might not object to someone loving whomever they want to love and marrying whomever they want to marry. But I trust that God knows far more than I do about the consequences of that view, especially upon children. Especially upon our relationship with God and our eternal future.

Our supposed “opinion” is grounded in the wisdom of the ages, the Judeo-Christian foundation of Western Civilization, law and morality.

When disparaging Franklin Graham, New York Council Speaker Corey Johnson said, “[Graham] calls the LGBTQ community ‘detestable’ and ‘immoral.’ He says being gay is ‘an affront to God,’…Samaritan’s Purse requires its volunteers to agree to a written affirmation ‘that marriage is exclusively the union of one genetic male and one genetic female.’ Hate has no place in our beautiful city.”

It is not simply Franklin Graham’s opinion that the LGBT sex is “detestable” and “immoral.” When he used those words he was quoting God’s words (Leviticus 18 and Romans 1). Graham did not say that “being gay is an affront to God.” He draws a deep line between a person’s identity and their behavior.

Graham actually said that teaching LGBT history that champions them as morally good victims of morally bad Christian oppression is “an affront to God” and a violation of the religious freedom of parents who wish to raise their children in their Christian beliefs. Have Christians wrongfully persecuted LGBT’s? Yes. Westboro Baptist comes to mind. But they are the exception, not the norm. And with the LGBT deliberate mischaracterization of “hate” and “homophobia” their history curricula do not get it right.

As in my last post on The Atlantic’s article attacking Christian leaders for judgmental “Christian cruelty” in this pandemic, we can seek and offer the truth when Christians are unfairly mis-quoted. Google the quotes, follow the attribution links. Shine the light of truth on the deceptions.

How Will Christians Respond?

I remember wishing back in the 70’s, when the debate over the legalization of abortion raged, that the Bible spoke as clearly against abortion as it does against homosexuality. The pro-life argument from Scripture is more inferential (rescue those who are being dragged away to slaughter; every human being is created in God’s image). I could never imagine that America could approve of homosexuality — a sexual practice so clearly condemned by Scripture. But now here we are. And the persecution is real. What are we prepared to do?

We need to be praying, thinking and pre-deciding how we will respond. Presidential candidate Joe Biden has promised that if he wins his first priority will be the passage of the Equality Act. As National Review reported, “The sweeping legislation would amend the Civil Rights Act of 1964 to include sexual orientation and gender identity as protected characteristics. … It redefines sex to include gender identity, undermines religious freedom, [and] gives males who identify as females the right to women’s spaces.” If it passes (and it already passed in the House), parents will probably be required by law not to “discriminate” against their children’s interest in or desire to change their sexual orientation on gender identity.

We need to pre-decide: Will we use preferred pronouns in order to keep from losing our jobs? Will we keep our children in public school classes teaching LGBTQ sex as good and healthy? Or classes that teach LGBTQ history? In some districts in California you cannot opt out. Will you stand by and let your daughter get medical treatment to become your son? Without being allowed to take her to a discussion group about Biblical sexuality at your church? What are we prepared to do?

We need to pre-decide: Will we love and respect LGBT people we meet and open our homes in hospitality and friendship without compromising the truth should God lead us to speak it? Will we risk rejection for speaking it? Will we speak or vote for Biblical sexual morality in our churches and work for peace as far as it depends on us. And if our church walks away from Romans 1 will we go with it? Or endure possible condemnation and loss of friendships and community?

We need to pre-decide: Do our sexual ethics matter all that much to God? Is refusing to compromise really worth persecution? In the first Church Council the apostles debated what to tell the Gentiles about how to live in the light of all the Old Testament laws of Moses. This is what they decided: Acts 15:19-20 “…we should not trouble those of the Gentiles who turn to God, but should write to them to abstain from the things polluted by idols, and from sexual immorality …,” and a couple of dietary restrictions. Out of all the laws that Moses gave, laws regarding sexual immorality made the short list and are repeated in the New Testament.

Do Not Compromise or Waver

The book of Revelation makes it clear that in the end times, monstrously evil powers arise who will require complete submission. They will make war on Christians who will be prohibited from buying or selling anything and even slaughtered.

I’ve wondered if there might be a link between the sexual immorality of Mystery Babylon and the blood of believers. Maybe the end-times persecution will not begin suddenly with the rise of the anti-Christ, but will rise steadily as sexual immorality increases and becomes protected by law. And Christians refuse to compromise.

I believe Jesus will return for us before we face all the oppression and plagues of the end times. But, I’m far from certain. If we face the terrible persecution described in the book of Revelation, may God give us the grace and strength to not compromise or waver.

We may think we would never deny Christ and take “the mark of the beast.” But how are we at facing persecution now? It’s possible that persecution of Christians over LGBT sexuality will increase in frequency and intensity and extend into that time? What we are prepared to do now in the face of this opposition may determine what we are prepared to do should we face those times.

Above all we need to pre-decide to love the LGBT community as Franklin Graham and Samaritan’s purse have done, as Jesus Christ does. Beyond that, will we hold fast our belief in Biblical sexual morality, refusing to affirm the goodness of LGBT sexuality or following laws that promote it in violation of God’s laws? May God give us strength now not to compromise or waver.