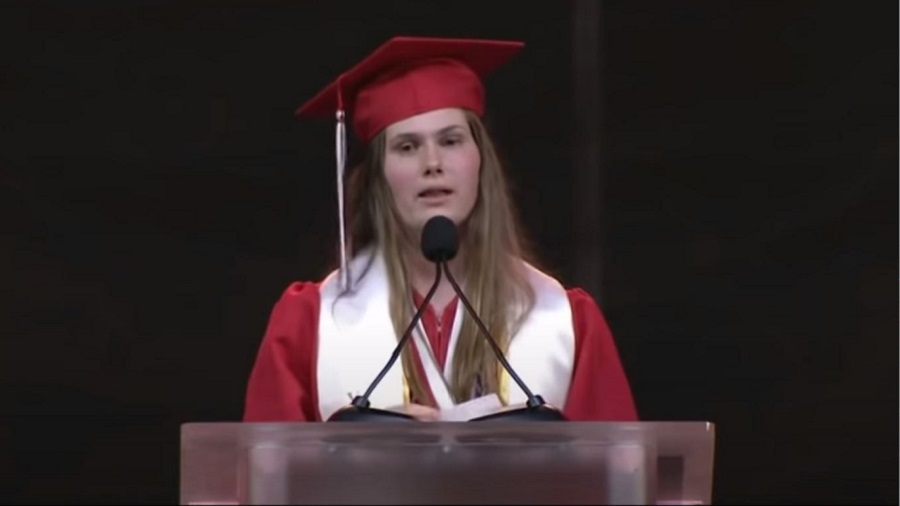 You may have heard by now about Paxton Smith, the high-school valedictorian in Texas who switched out her expected speech to decry the recent heartbeat law passed in that state, which restricts abortions early on in pregnancy.

“I have dreams and hopes and ambitions,” she said. “Every girl graduating today does. … And without our input and without our consent, our control over that future has been stripped away from us.

“I am terrified,” Smith said, “that if my contraceptives fail, I am terrified that if I am raped, then my hopes and aspirations and dreams and efforts for my future will no longer matter. I hope that you can feel how gut-wrenching that is. I hope you can feel how dehumanizing it is, to have the autonomy over your own body taken away from you.”

This dear, sweet girl. The dehumanizing thing is a culture telling her that her natural ability to bring life into the world is anything but amazing. How many ways have we failed her as a society? Sex is presented as something so casual, as if akin to watching something on Netflix or TikTok. Starbucks in the morning, sex at night.

What are We Selling Our Kids?

And what on Earth is going on with boys that rape is in the forefront of her mind? We all know why, of course. The drinking and hook-up cultures make the possibility more likely than not. As the #MeToo movement became a thing, a friend of mine said he was grateful nothing of the sort had ever happened to his wife or daughters. I told him to ask them. Many of us have been there in one way or another; but we’re looking in the wrong place for solutions.

One wife and mother responded to a video of part of Smith’s speech on Twitter. After noting how sad it all is, she wrote: “What the h*** are we selling our kids? Children — they don’t make women less-than. They don’t stand in your way. They aren’t a barrier to your dreams. Abortion isn’t some great equalizer. The act of killing an unborn human does not make the world better for women.”

The Culture Has Failed Her

We’re not mad at the young woman, we’re mad at the adults, schools and culture that have failed her. She thinks her freedom and success are contingent on the availability of birth control. That’s a lie. There’s freedom in choosing something better for yourself, to know that you don’t have to prove your beauty or power to yourself or anyone else by having as much sex as you please.

I know it’s so quaint as to be insane to modern sensibilities, but saving sex for actual self-sacrificial love in marriage could be so crazy it’s worth trying. We don’t tell girls that they are worth waiting for anymore. Is it ever presented as an option? Even some religious books in Catholic schools are not presenting a compelling case for what love truly is. And it shouldn’t just be in a religious context.

The fact of the matter is, we are rational beings with the capacity for discipline, which can be a source of tremendous joy. Talk to some of the young Catholic couples who got married during COVID, even though they couldn’t have the full-on parties that we’re accustomed to. It was worth the wait, and marriage is that important.

Smith thinks her happiness in life depends on contraception and abortion. Abortion is not just an expectation, but a routine. You realize it when you spend any time around abortion clinics — they think abortion is the responsible thing. Is that what they would want for their children? Why aren’t we setting young people up for actual joy instead of managing miseries?