Letter From US Attorney to Trump Re: Election Causes Stir 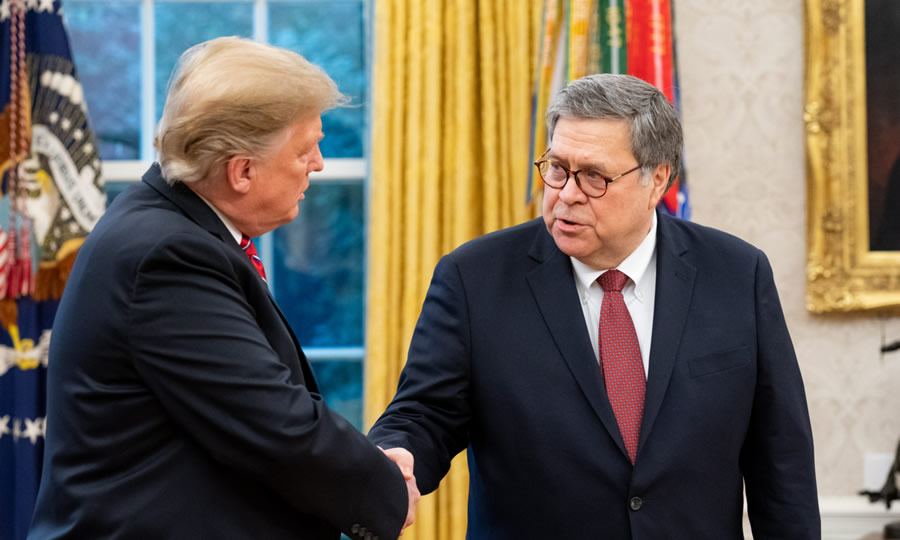 A month ago, William M. McSwain, a former US attorney for the Eastern District of Pennsylvania, wrote to former President Trump to allege he’d been pressured by then-Attorney General Bill Barr not to investigate voter fraud and election irregularities in his state. Trump released the letter on Monday, on the eve of Biden’s visit there and what turned out to be a bizarre speech on voting rights (but I digress).

The letter was accompanied by a statement from Trump that called Barr’s actions “outrageous!”

We must at least consider what has been alleged by this former US attorney.

We thought it best not to jump on this but to use the good old 48-hour rule, as it’s technically hearsay about Barr. And, sure enough, Barr has since denied this. “It’s written to make it seem like I gave him a directive,” Barr said in an interview with Politico. “I never told him not to investigate anything.”

But with that in mind, we must at least consider what has been alleged by this former US attorney.

“President Trump,” McSwain wrote, “you were right to be upset about the way the Democrats ran the 2020 election in Pennsylvania — it was a partisan disgrace.”

He went on to say that his office had received numerous allegations of election fraud and irregularities, on Election Day and afterwards, but that Barr had instructed him not to make any public statements or put out press releases about any of that.

Barr had also told him to pass any serious allegations along to the Pennsylvania AG for investigation. That would have been Josh Shapiro, who before the election tweeted “Trump is going to lose” if “all the votes are added up” in Pennsylvania.

McSwain told Trump he disagreed with those orders but followed them anyway, as he had been trained to do as a Marine infantry officer.

Recall that before the election, Barr sent a memo to all US attorneys authorizing them to probe any “substantial allegations” of election irregularities before election results were certified. At the same time, though, he told them it would be “prudent” to proceed with any election integrity matters as a “preliminary inquiry so as to assess whether available evidence warrants further investigative steps.” In other words, they could stick a toe in, but they were to proceed with caution.

“While serious allegations should be should be handled with great care,” he told them, “specious, speculative, fanciful, or far-fetched claims should not be a basis for initiating federal inquiries.”

How Hard Was Barr’s DOJ Looking at Evidence of Election Fraud?

In retrospect, this directive involves some big gray areas. For example, who gets to define “specious,” “speculative,” etc.? What seems highly possible or even probable to you or me might have been labeled far-fetched by those who dreamed of, or even just assumed, a Trump loss.

As early as September 2, 2020, Barr said he was aware of “big” fraud investigations over reported issues with mail-in ballots in several states. But he also said that because the country was so closely divided, this was like “playing with fire.”

Recall also that after the election, in December 2020, Barr told the Associated Press that the DOJ had found no evidence of election fraud “on a scale that could have effected a different outcome in the election.” If only we could tell how hard he was really looking. As Jonathan Karl relates in his upcoming book, Betrayal, Barr said he suspected all along that there was nothing there and that “it was all bullsh**.”

But back to the present day, and McSwain’s letter to Trump. Here’s the pdf.

One reason we hesitated to run with this letter is that in it, McSwain also told Trump that he’s a candidate for governor of Pennsylvania — the Republican in the race with “the best chance to win the general election in November 2022.” He asked for Trump’s support.

As it happens, Josh Shapiro, the state AG to whom McSwain was supposed to turn over allegations of fraud, might very well be his Democrat opponent in the governor’s race.

So keep this in mind when assessing Mr. McSwain’s allegations of election hanky-panky in Pennsylvania. Was he just trying to gain favor with Trump? He did go on to say that one of his first priorities if elected would be to modernize Pennsylvania’s election process to protect the voting rights of all citizens. “That means no ballot harvesting, unsigned ballots, undated ballots, ballots collected after Election Day (other than legitimate military and overseas absentee ballots), obstacles to poll watchers observing the counting of ballots, different rules in different counties, and, of course, no ballot stuffing of the kind I previously prosecuted,” he said. “It also means responsible voter ID legislation.” All good, but certainly what Trump would want to hear.

He said he wants to make it easy to vote but hard, if not impossible, to cheat.

So, where is Bill Barr on all this, really? Is it true that he was telling a US attorney not to look into charges of election fraud in Pennsylvania but to instead pass them along to someone who anticipated a Trump loss once “all the votes are added up”? Again, Barr denies ordering this.

The Epoch Times also summarized this story in a “premium” report.