We can still prevent history from repeating. 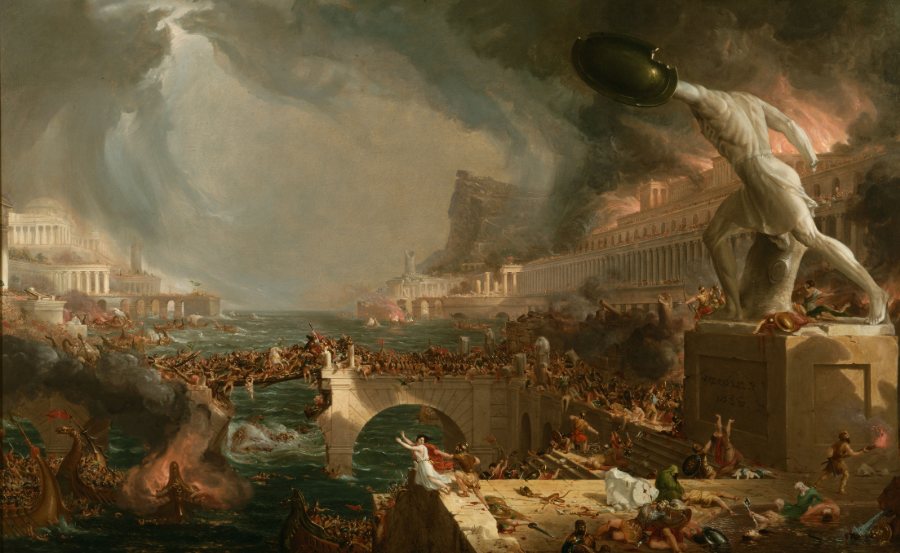 "Destruction," from The Course of Empire by Thomas Cole

Two thousand years ago, an eminent Roman historian coined the popular aphorism, “Better late than never.” His name was Titus Livius, anglicized as simply Livy. True to the aphorism, he wrote much that deserves overdue attention today.

Livy’s life (roughly 59 BC to about 17 AD) spanned the most consequential period in the thousand-year history of ancient Rome. He witnessed the last decades of the crumbling old Republic and the rise in its place of the imperial autocracy we know as the Roman Empire. He was in his early twenties when the last great defender of the republican heritage, Cicero, was assassinated by a henchman of the tyrant Marc Antony. Livy observed the entirety of the reign of the first Emperor, Augustus. He is best known for his history of Rome, Ab Urbe Condita, described both in his day and in ours with such terms as “monumental” and “magisterial.”

What little we know of the man himself suggests he was somehow financially well-off, independent, and reclusive. He was schooled in rhetoric, philosophy, and history. He never served in any public position, though apparently, he personally knew Augustus. Writing his massive history of Rome absorbed his adult life.

A Passion for Rome

Though Romans at the time of his writing held his work in high regard, we know that some parts of Livy’s historical accounts were surely based on minimal records, old and dubious oral stories, and even legend. After all, he wrote 2,000 years ago about people and events of as much as eight centuries before his time. “I hope my passion for Rome’s past has not impaired my judgment,” he opined in his introduction to Ab Urbe Condita, “for I do honestly believe that no country has ever been greater or purer than ours or richer in good citizens and noble deeds.”

“The old Romans,” wrote Livy of his countrymen before the beginning of the Republic, “all wished to have a king over them because they had not yet tasted the sweetness of freedom.” But then in 508 BC, Romans mounted a truly historic revolution of both ideas and governance. They overthrew the monarchy and established a new order that ultimately included a Senate of nobles, popularly elected Assemblies, the dispersion of centralized power, term limits, a constitution, due process, habeas corpus, and the widest practice of individual liberty the world had yet seen. Before they lost it all less than five centuries later, they experienced a remarkable rise and fall. Readers will find many articles about Rome at www.fee.org/rome.

From Livy, we learn about Rome’s pivotal wars against the Carthaginians, the Samnites, and other peoples of the Italian Peninsula. He also informs us of the rivalry between Sulla and Marius, the tumultuous last days of the Republic as strong men fought each other for power, the murder of Julius Caesar, and the self-serving machinations of Augustus. Livy celebrated the courage of his ancestors; in fact, he originated the phrase, “Fortune favors the brave,” which is still used commonly today as a maxim and a motto.

The Value of History

Livy believed the value of history is greater than the knowledge of names, places, and dates, as this passage of his indicates:

There is this exceptionally beneficial and fruitful advantage to be derived from the study of the past, that you see, set in the clear light of historical truth, examples of every possible type. From these you may select for yourself and your country what to imitate, and what, as being mischievous in its inception and disastrous in its effects, you are to avoid.

An Understanding of Human Nature

His interpretation of historical events suggests he possessed an admirable understanding of human nature. Consider these remarks:

There is nothing man will not attempt when great enterprises hold out the promise of great rewards.

He will have true glory who despises it.

Men are only too clever at shifting blame from their own shoulders to those of others.

Men are slower to recognize blessings than misfortunes.

The state is suffering from two opposite vices, avarice and luxury; two plagues which, in the past, have been the ruin of every great empire.

There is nothing that is more often clothed in an attractive garb than a false creed.

The tendency of people to envy those with wealth, whether ill-gotten or well-deserved, is nothing new in history. Centuries before Livy, the Tenth Commandment received by Moses warned, “Thou Shalt Not Covet.” Livy noted how destructive the envy motive can be:

True moderation in the defense of political liberties is indeed a difficult thing: pretending to want fair shares for all, every man raises himself by depressing his neighbor; our anxiety to avoid oppression leads us to practice it ourselves; the injustice we repel, we visit in turn upon others, as if there were no choice except either to do it or to suffer it.

Perhaps in part because he observed the corrosive impact of envy, Livy expressed skepticism about, for want of a better term, the general public:

Such is the nature of crowds: either they are humble and servile or arrogant and dominating. They are incapable of making moderate use of freedom, which is the middle course, or of keeping it.

Personal Character and the Destiny of Nations

In my own writings as a historian, and economist as well, I’ve often noted the powerful connection between personal character and the destiny of nations. Livy provides some confirmation in this passage:

The subjects to which I would ask each of my readers to devote his earnest attention are these: The life and morals of the community; and the men and the qualities by which, through domestic policy and foreign war, dominion was won and extended. Then as the standard of morality gradually lowers, let him follow the decay of the national character, observing how at first it slowly sinks, then slips downward more and more rapidly, and finally begins to plunge into headlong ruin, until he reaches these days, in which we can bear neither our diseases nor their remedies.

As we think about our own future, knowing something about the past is indispensable. The experiences of those who came before, especially when understood in the context of their times, are fraught with lessons we ignore at our peril. If learning those lessons puts us on a better path, let us learn them now. As Livy would say, “Better late than never!”