This must be recognized and repudiated before our nation is torn apart. 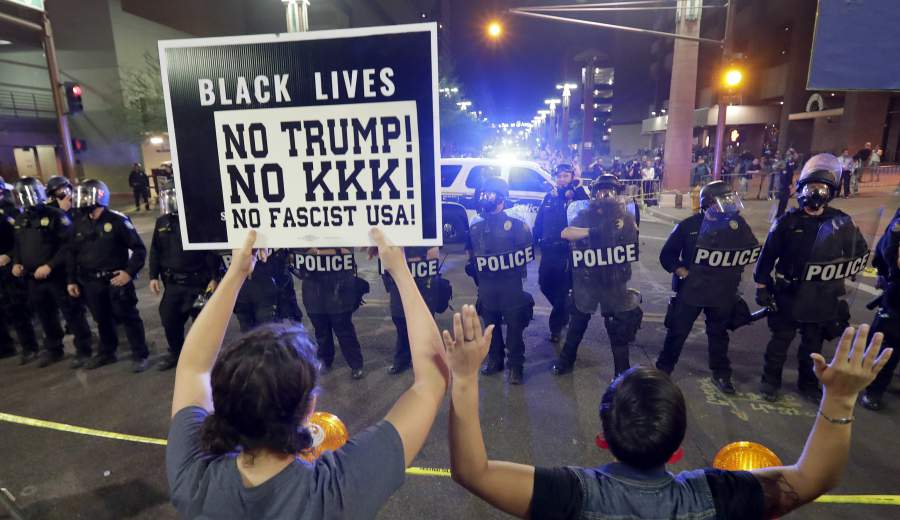 Protesters raise their hands after Phoenix police used tear gas outside the Phoenix Convention Center, Tuesday, Aug. 22, 2017, in Phoenix. Protests were held against President Donald Trump as he hosted a rally inside the convention center.

Something ugly is happening in America. Something dangerous, divisive, and destructive. And every day, the leftwing media help fan the flames of division, hatred and strife. We must recognize and repudiate this before our nation is torn apart.

Certainly, we’re feeling the effects of eight years of identity politics under the Obama administration. During that time racial strife greatly increased in our land. And there’s no doubt that the campaign and presidency of Donald Trump have further exacerbated the divisions in our country.

But the leftwing media is adding fuel to this fire by peddling a very dangerous lie. The lie equates the vast majority of Trump supporters with Nazis and white supremacists. Liberal campuses are doing their part as well, declaring war on whiteness itself.

Apparently The Trump Base is Racist

They hate all Hispanics (and Mexicans in particular). They want all Muslims banished from our country (if not killed). And of course, they loathe blacks, wanting to subjugate them once again.

The problem with this narrative is that it’s patently false. It does not describe the vast majority of Trump’s base. And it ignores the fact that Trump did better in 2016 with blacks and Hispanics than Romney did in 2012.

But why quibble about facts? Trump wants to build a wall to keep illegal immigrants out. His supporters shout their support. In the eyes of the leftwing media, this can only mean one thing: racism.

Trump brought Steve Bannon into his inner-circle, and Bannon runs Breitbart News, which is the alleged platform for the alt-right. Trump is therefore part of the alt-right, as are those who voted for him. This makes tens of millions of Americans into Nazi supporters and sympathizers. Need I say how dangerous these accusations are?

As for Breitbart, while it is unashamedly conservative, it is one of the most pro-Israel major news sites that exists. Since when are neo-Nazis pro-Israel? Since when does the alt-right hire Orthodox Jewish senior editors like Joel Pollack and have a major, pro-Zionist office in Jerusalem?

Rumor even has it that Bannon pushed for the immediate relocation of our embassy to Jerusalem but was opposed by others in the Trump administration.

As for the radical left, typified by groups like Antifa, they are largely lionized by the leftwing media. They’re portrayed as freedom fighters with a righteous cause, in no way comparable to the hate-filled, violent members of the alt-right.

We destroy every lie by living lives worthy of respect and honor, reaching out to those with whom we differ with civility and grace.

The problem for those driving this narrative is that there has been little or no substance to it. That is, until Charlottesville.

Suddenly, the presence of 500 “Unite the Right” demonstrators represented all Americans who voted for Trump. Unless you immediately and continuously denounced those demonstrators, you were marked as a sympathizer. And God forbid you raised any objection to the removing of Confederate monuments, even if for historical purposes. To do so is racist, plain and simple.

And when the president failed to denounce by name the KKK, neo-Nazis and white supremacists the day of the Charlottesville tragedy, that proved that he was a Nazi sympathizer himself, as were his supporters. And the leftwing media fuels these fires by the hour.

For years now, LGBT activists have perfected the art of marking their opponents as KKK and Nazis. So the groundwork has already been laid. It just needs to be applied more broadly.

The end game is obvious: Mark as KKK and Nazis all those who do not embrace the radical, leftwing agenda. Then treat those bigots accordingly. America’s precious freedoms, our freedoms of speech and conscience and religion, surely do not apply to such bigoted lowlives. Instead those people (meaning you and me if you are a conservative, especially a conservative person of faith) should be marginalized, maligned, and silenced.

And if it takes violence to silence them (us!), so be it. As a Dartmouth professor recently argued, leftwing activists “need to preemptively strike to avoid the rise of white nationalists.”

Personally, I do not believe that most of the leftwing media wants to see conservatives suffer bodily harm or be physically attacked. But I do believe that they view us with scorn and derision. I believe they view us as very close (if not equivalent to) the alt-right. And I’m quite sure they are fueling the fires of racial and social division, hatred, and strife.

The best way to resist the media’s false narrative is to refute the misinformation. Do our best to disseminate the truth. Make a concerted effort to destroy every lie by living lives worthy of respect and honor, reaching out to those with whom we differ with civility and grace.

And where we see genuine bigotry and division, let us expose it and isolate it, whether it be on the left or on the right.

But make no mistake about it. These are dangerous times.