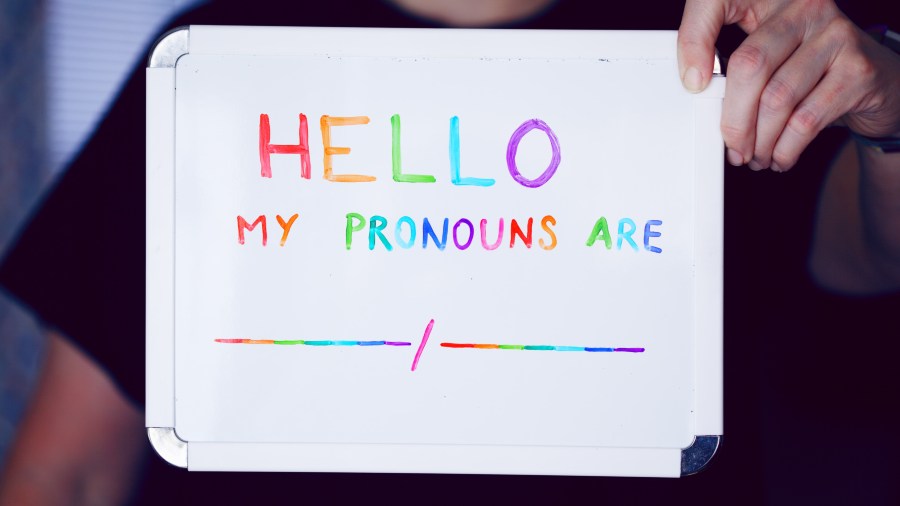 A new, glossy messaging document reveals the plans of left-wing groups to sell American voters on gender theory. “Transgender Youth and the Freedom to Be Ourselves” is the joint product of the Transgender Law Center, ASO Communications, and Lake Research Partners. It seeks to provide Democrats with talking points to shore up their base, gain new allies, and counter critics. The central plank of the group’s strategy, as Mary Margaret Olohan reports, is to “weave together” a “Race Class Gender Narrative.”

Linking gender to race and class makes rhetorical sense. Most Americans believe that all men and women — black or white, rich or poor — are created equal. If gender activists can tie their ideas to racial and class equality in the minds of most Americans, they will likely achieve their goals.

But this “race class gender” strategy may be too clever by half. It’s doubtful that many, let alone most, minorities and working voters buy into gender theory. Gender activists seek to replace biological reality, in our laws and institutions, with a fluid notion of “gender identity.”

Biased judges may deliver this wish without the bother of elections. More likely, gender activists will need to win over majorities to make it happen.

The authors of this new report know this. “Using a Race Class Gender Narrative,” they write, “we can mobilize our progressive base (particularly Black, AAPI, and Gen Z audiences), marginalize our opposition, and move persuadables across race.”

How keen is the average plumber, UPS driver, housekeeper, construction worker, or landscaper to make sure high school males who identify as female get to shower with the girls?

The progressive base is already persuaded, though, as are many Gen Zers who have been subject to years of gender propaganda. But what about minorities and working Americans? The report suggests that for Democrats to expand their support, they must “tell a convincing story of how our opposition uses strategic racism and transphobia to harm us all.”

This could be a hard sell. The past struggles of racial minorities and the working poor are vastly different from the “struggles,” such as they are, related to gender. Yes, some people are distressed with their biological sex. We should treat them with compassion. And they should enjoy the same legal protections as everyone else.

But the debate over gender theory is not about that. It’s about an ideology that occupies the commanding heights of culture — unlike working class Americans now, and many minorities in the past. The critics of gender theory are far more likely to be marginalized or cancelled than are its champions.

Indeed, the victims of this ideology are becoming harder and harder to hide. They include girls who must compete against males and share private spaces with them. They include thousands of children who have been convinced, by schools and social media “influencers,” that they are born in the wrong body. Many have fallen under the spell of “rapid onset gender dysphoria.”

The victims also include anguished parents. They struggle to protect their sons and daughters from life-changing hormones and scalpels, from woke teachers, therapists, doctors and even government officials.

A Heritage Foundation poll last year found that most Americans oppose the key planks of the gender agenda. Will most minorities and working-class Americans, wooed by a few rhetorical tricks, embrace the ideologues who are clearly the victimizers, rather than the victims?

I’m skeptical. Gender ideology seems to be an elite fixation of upper- and upper-middle class college grads. It’s likely baffling to ordinary people, including the roughly two-thirds of American adults who lack a bachelor’s degree.

Take the mind-bending neologisms and pronouns. References to “women” give way to degrading euphemisms like “bodies with vaginas,” “non-prostate owners” and “cervix owners.” Those who identify as “gender fluid” often state their preferred pronouns as “they/them” — as do a full third of the staff of the Transgender Law Center. One staff member identifies as “queer trans femme.”

What gender theory means in practice is far worse. It means that any male who identifies as female should get to compete against females — in all-girl sports. By the same incantation, male students can use girls’ bathrooms and locker rooms in K-12 schools. Male rapists can be relocated to women’s prisons. Doctors and nurses could be forced against their consciences to administer cross-sex hormones and remove healthy organs.

How many Chinese immigrants know what “queer trans femme” means? How keen is the average plumber, UPS driver, housekeeper, construction worker, or landscaper to make sure high school males who identify as female get to shower with the girls? How eager is the typical black cop for public schools to make sure gender-confused kids get access to cross-sex hormones, against their parents’ wishes? How many Mexican-American farmers, or cowboys, or restauranteurs, want to know your preferred pronouns? How many of them would rejoice if their own daughters suddenly announced that they were boys, or their sons, girls?

It’s tempting to guess, but we don’t know the answers to these questions. The consultants behind “Transgender Youth and the Freedom to Be Ourselves” hope that with the right marching orders, minorities and working class voters will become docile foot soldiers in the long march of gender theory.

Critics of gender theory might want to find out what these groups of Americans really think and craft their own strategy for appealing to them.

Jay W. Richards, Ph.D., is the executive editor of The Stream. He is also a senior fellow at the Discovery Institute and the William E. Simon senior research fellow in The Heritage Foundation’s DeVos Center for Religion and Civil Society, where he focuses on protecting life, marriage and religious liberty. His most recent book, co-authored with Douglas Axe and William Briggs, is The Price of Panic: How the Tyranny of Experts Turned a Pandemic into a Catastrophe.