Leftist Violence is a Natural Outgrowth of Authoritarian Ideology 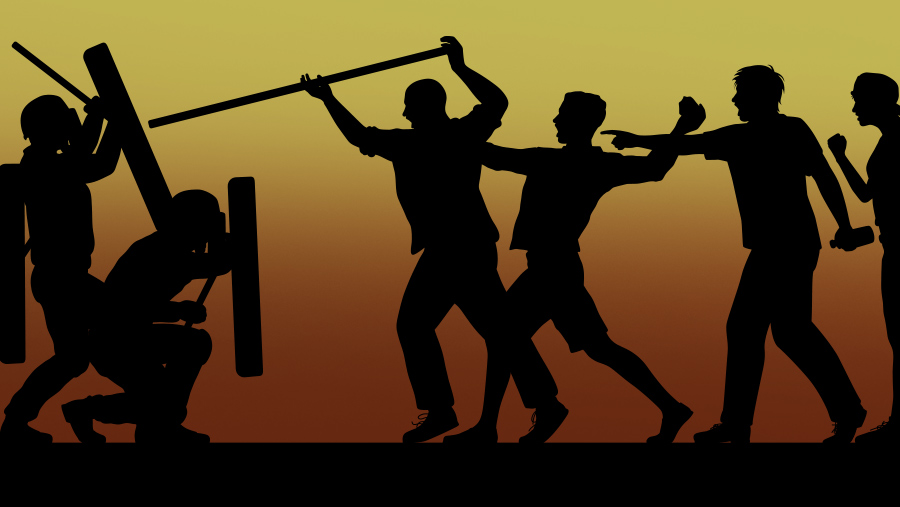 What do you make of the leftist violence and anarchy all over the country lately? Is it just random and unrepresentative of the Democratic Party and the left as a whole? Or does it logically follow from what the left has become?

Mob members followed one ICE officer as he picked up his daughter from summer camp, and some also showed up at his house. Protesters went to another officer’s home with flyers showing his picture and name and accusing him of being part of the Gestapo.

Democratic Mayor Ted Wheeler, also police commissioner, ordered the police not to intervene in these assaults. “I do not want the @PortlandPolice to be engaged or sucked into a conflict,” tweeted Wheeler, “particularly from a federal agency that I believe is on the wrong track.”

In an equally despicable incident, the Portland mayor refused to respond to antifa’s blocking traffic and harassing bystanders. These leftists took to the streets to protest the death of Patrick Kimmons, who was fatally shot by police.

Leftists assaulted two GOP candidates in Minnesota. A man punched state Rep. Sarah Anderson in the arm when she objected to his destroying Republican yard signs. Shane Mekeland, a candidate for the Minnesota House, sustained a serious concussion when sucker-punched at a restaurant while speaking with constituents. Meanwhile, the Minnesota Democratic-Farmer-Labor Party suspended its communications staffer William Davis for jokingly posting on Facebook that Democrats should “bring (Republicans) to the guillotines” after the midterm elections.

Shrieking leftists pawed at the Supreme Court building as Brett Kavanaugh was being confirmed. Leftists spit on Sen. Lindsey Graham in the Senate hall over his support for Kavanaugh. A Democratic operative for a George Soros-funded group was arrested for battery against a Nevada GOP candidate’s female campaign manager.

Democratic politicians and the leftist media are using increasingly hostile rhetoric. Sen. Tim Kaine said liberals must “fight in the courts, fight in the streets” and “fight at the ballot box.” MSNBC’s Morning Joe co-host Mika Brzezinski called for invoking the 25th Amendment to remove President Trump from office, claiming he “is not fit to lead” because he is “going to do something crazy in five minutes, one hour, tonight or tomorrow.”

We can dismiss these and scores of other orchestrated incidents as merely anecdotal or as no worse than what the political right is doing, but I honestly don’t believe there is equal mania on each side of the political aisle — and there’s a reason for that.

It seems there is a logical connection between the left’s ideology and its authoritarian, intolerant and violent behavior. There are passionate advocates on both sides of the political divide, each fervently believing in their respective views, but the modern political left is much less respectful of the Constitution, the rule of law and democratic processes. For far too many leftists, the end justifies the means, so they are willing to suspend due process and change the rules when they don’t prevail at the ballot box.

Just consider their use of government agencies to prevent Donald Trump’s election and emasculate his power once he was elected, their rumblings about restructuring the Supreme Court if they regain power, their stated intention to abolish the Electoral College, their plan to impeach Trump because they can’t stand him — irrespective of whether he has actually committed an impeachable offense — their threats to impeach Justice Kavanaugh after they couldn’t block his confirmation through the constitutionally established process of advice and consent, their use of judicial activism to achieve policy results through court “super-legislatures” that they can’t achieve through the democratically elected branches, their opposition to voter ID laws, their desire for open borders, and their use of executive orders and overreaching administrative rulings to achieve results they can’t achieve through the proper legal channels.

Leftists, being largely secular, invest their faith in government, which partially explains their inability to accept the failures of their policies to achieve the results they claim they want (socialism) and their sometimes even abandoning the pursuit of those results. For example, they are often concerned with employing some nebulous form of fairness even when it means spreading economic misery across the board.

The left’s moral preening, virtue signaling and sermonizing are natural outgrowths of its quasi-spiritual, unshakable faith in its failed utopian policies. Leftists invested enormous hope in Obama’s agenda, but it yielded only economic stagnation and an America in decline. Their faith-based incredulity manifests itself in their taking credit for Trump’s economy — even after their leader himself, former President Obama, predicted that the dreadful economic malaise over which he presided was to be a permanent phenomenon in America.

The sad reality is that Democrats have no solutions anymore and thus are reduced to crass, divisive identity politics — pitting minorities against white people, women against men, and poor against rich. No matter what they say, there is no satisfying them; they traffic in agitating racial, gender and economic warfare, and it’s devastating to the national fabric. This explains why they demonize Kanye West and any other black person who dares to stray from the prescribed liberal dogma.

The left’s increasing violent episodes and rhetoric give us a taste of what Democrats would be like if they regained majority power. If that happens, they will engage full-bore in the kind of lawless authoritarian behavior they falsely accuse President Trump of committing.

There are wonderful rank-and-file Democrats throughout the nation, but the extremists are in firm control of the party, and until that changes, we have to fight as intensely as they do and soundly defeat them at the ballot box.

For the Left, the Kavanaugh Brouhaha is Not About Kavanaugh

The Leftist Contempt for Middle-Class Values