The Left, the Wall, the Truth 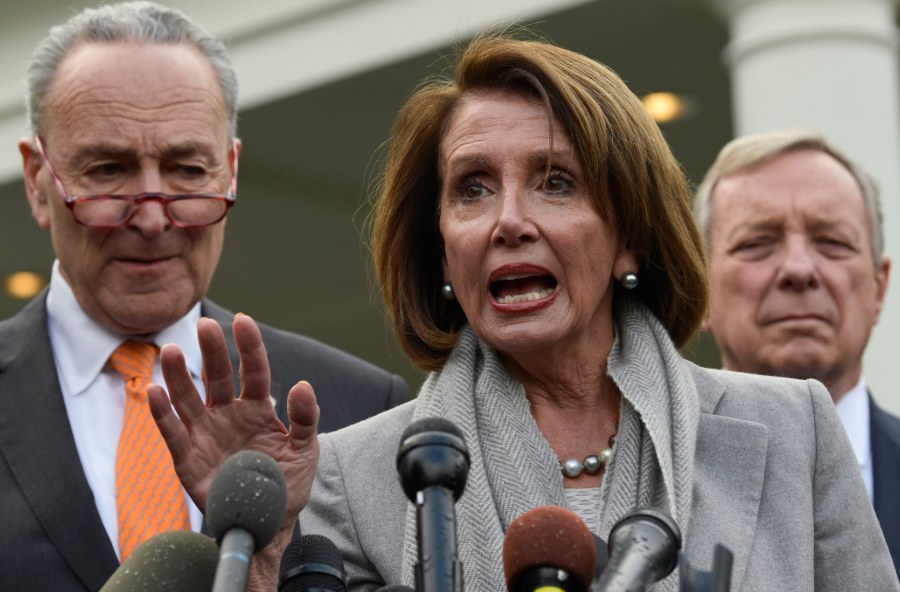 House Speaker Nancy Pelosi, D-Calif., speaks to reporters while flanked by Senate Minority Leader Charles Schumer, D-N.Y., on her right and Sen. Richard Durbin, D-Ill., on her left at the White House after meeting with President Donald Trump about ending the partial government shutdown.

Democrats and others on the left offer three reasons for their opposition to building a wall on America’s southern border.

Each one is false, so false as to constitute lies. So, the only question is: Do Democrats and others on the left believe these lies?

This question has plagued me all my life. Leftism is built on lies — and has been since Lenin. That’s why he named the Communist Party’s lying newspaper Pravda (“truth”).

Did my left-wing professors at Columbia University really believe the United States and the Soviet Union were equally responsible for the Cold War? Did they really believe one of the most genocidal regimes in history — which butchered tens of millions its own people, starved as many as 4 million Ukrainians, enslaved seven Eastern European countries under totalitarian rule and created the monstrous North Korean communist regime — was no more responsible for the Cold War than the United States, the freest country in human history?

Did my left-wing professors really believe men and women are the same except for body parts? And do today’s leftists really believe human beings with double X chromosomes, a vagina, a uterus, ovaries, menstrual periods and lactating breasts are not necessarily female?

Do leftists really believe American universities constitute “rape cultures”? If so, why does any left-wing parent send his or her child to college? Would you send your daughter to a place you believe is permeated by rape?

Do leftists really believe that the statement “There is only one race: the human race” is a racist statement? That is the official position of the University of California.

Do leftists really believe that virtually every criticism of former President Barack Obama emanated from racism, that all opposition to lowering college admission standards for blacks is racist, that all attacks on George Soros are anti-Semitic?

If leftists believe any of the above, let alone all of it, they are deluded people. And the existence of tens of millions of deluded people in a society can only portend catastrophe. If leftists do not believe those claims, they are not deluded; they lie for effect and, therefore, engage in evil. The existence of tens of millions of people consciously committed to lying means society has little hope.

Now to the Wall.

Do leftists believe the country cannot afford $5.7 billion? As the Democrats have approved $1.3 billion for border security, the difference is about one-tenth of 1 percent of U.S. federal spending ($4.5 trillion). Democrats and the rest of the left make this argument. Yet they are the very people who, for more than half a century, have successfully pushed for unprecedented expansion of government spending; the very people who are overwhelmingly responsible for local, state and federal government debts of such magnitude that they cannot be paid without massive decreases in spending and the likely social disruption they entail. It is not possible these people believe America cannot afford to pay for a wall. They are, therefore, lying when they claim the price tag is too high.

California Democrats have allocated some $77 billion to pay for a high-speed train between San Francisco and Los Angeles that will be ready in 2033 at the earliest. It will undoubtedly rise to more than a hundred billion dollars. And, thanks to the left and the Democrats, California is spending this money despite being an estimated $2 trillion in debt (between debt and pensions).

When the Democrats Supported a Wall

The left says a wall (or steel barrier) would be “ineffective” at preventing illegal immigration. We know it doesn’t believe this, because just five years ago, Speaker Nancy Pelosi supported a bill that required the construction of 700 miles of border fencing. And Sen. Chuck Schumer was one among the “Gang of Eight” Republicans and Democrats who also supported 700 miles of fencing at the border. Every Senate Democrat voted for the Gang of Eight Bill, including 36 Democrats who serve in the Senate today.

Do Schumer and Pelosi and all these other Democrats regard fencing as effective but a wall as ineffective? Do Democrats deny that Israel’s barrier has virtually ended Palestinian terrorism? Do they believe Turkey’s just-built 500-mile wall across nearly its entire border with Syria will be ineffective? Do they know about the effective walls/barriers between the Turkish- and Greek-controlled areas in Cyprus; between Hungary and Serbia and Croatia; Morocco and Algeria; India and Pakistan; and elsewhere?

As for the Democrats and others on the left declaring a wall “immoral,” it is difficult to know which is preferable: that they are living in delusion or lying. On what grounds is it “immoral”? They never say.

Is there a Democrat or leftist who regards walls or other physical barriers surrounding homes or communities as immoral? One doubts it. For one thing, many of them live behind a physical barrier. So, then, why isn’t a physical barrier that protects America equally moral? The only possible answers are that these people don’t really regard America as their home or they are lying about a wall being immoral.

So why all the lies?

Because lies are effective in achieving left-wing goals. There are people in every political, social and religious group who lie. And there are people within every one of those groups who are truth tellers. But — and this is a “but” whose significance cannot be overstated — while truth is a liberal value and truth is a conservative value, truth has never been a leftist value. For the left, there is always something more important. In this case, it is the humiliation of the president of the United States.