Lauren Daigle is becoming one of the most popular Christian artists of all time right before our eyes. This could be a problem. 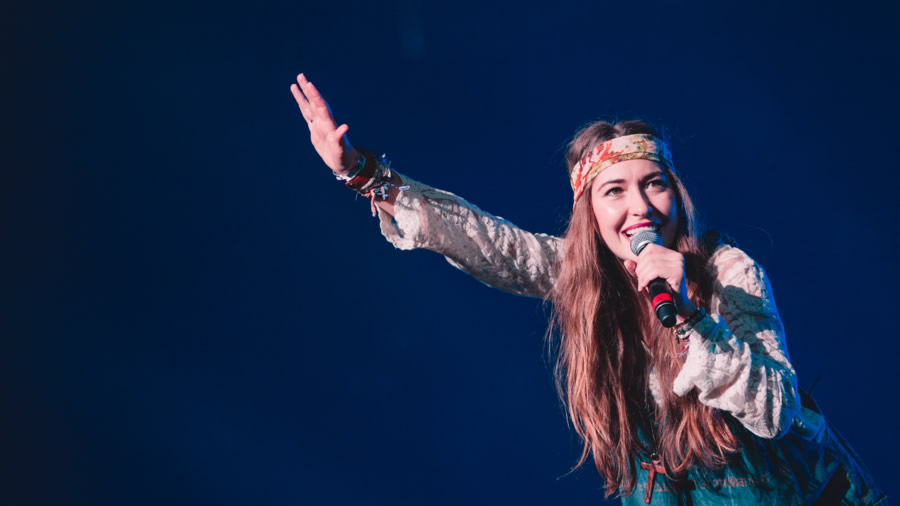 In this Jan. 9, 2016, file photo, Lauren Daigle sings at Winter Jam at the Schottenstein Center in Columbus, Ohio.

Lauren Daigle is a ridiculously talented young lady and she has been provided platforms few will stand on. Her rendition of the National Anthem at the 2020 National Championship game for college football was beautiful. Her song “You Say” is now officially the biggest Christian song ever, spending a record 69 weeks at the top of Billboard’s Hot Christian Songs chart. That song just hit Platinum for the second time.

Lauren also won a Grammy and a Billboard Music Award in 2019 and she recently won awards for artist of the year and contemporary album of the year for Look Up Child at the 50th annual Dove Awards Ceremony in Nashville. She has been featured on numerous news programs and talk shows including the Ellen Degeneres Show.

In response to criticism to her appearance alongside Ellen, famously and unashamedly homosexual, Lauren said, “I don’t have all the answers in life, and I’m definitely not gonna act like I do, but the one thing that I know for sure is I can’t choose who I’m supposed to be kind to and who I’m supposed to show love to and who I’m not, because that’s the mission right?”

That makes sense. However, when pressed, a problem was made clear — a problem most of Christendom seems to have ignored. The Atlantic reported in December 2018:

This week, another radio host asked her directly about whether she believed that homosexuality was sinful, and Daigle responded that she wasn’t sure.

“I can’t honestly answer on that,” Daigle said. “In a sense, I have too many people that I love that they are homosexual. I don’t know. I actually had a conversation with someone last night about it. I can’t say one way or the other. I’m not God.”

The Atlantic continued by referencing a Charisma News article I wrote on the issue: “The conservative-Christian author John Burton claimed that Daigle’s ambiguity compromised biblical truth and that now ‘millions are at risk of deception.’”

The Danger of Supporting Lauren Daigle

Much of the world simply cannot understand why we as Christians are so intent on fighting the culture wars. Why can’t we simply love and celebrate when others are discovering their identities and bravely living the way they feel is most authentic?

My personal passion is not to restrict or to renounce others for the sake of winning a battle or as leverage to prop myself up as superior. To do so would require a measure of wickedness on my part.

What drives me, and what drives most Christians who are absolutely heartbroken over the current state of affairs in our nation, including the normalization of abortion, homosexuality, pornography and other vices, is very basic. We are desperately attempting to rescue people from never-ending, unspeakable, maddening torment in Hell. That’s it.

To date, based on what I have derived via public media sources, Lauren has not renounced homosexuality as a sin. As I argued in my Charisma News article, this is a problem. A clear and present danger.

Christians continue to affirm her “ministry” and to support her art. Christian radio stations scoff at the idea of removing her songs from the playlist. Individuals are listening to her music in record fashion.

What does this communicate? Holiness is a non-issue. As I said previously:

Do you understand how easy it will be now for people to embrace homosexuality due to Daigle’s comments? Many others probably already have shifted their position to affirming homosexuality as acceptable for Christians. Others are now taking the casual approach that Daigle did, abandoning any urgency to promote righteousness.

When influential public figures make damaging comments or promote destructive theologies, it’s the responsibility of prophetic messengers, pastors and every Christian to look out for those who are at risk. To do otherwise would be an abdication of our responsibilities. Love demands we don’t stay silent.

The fact that such a basic biblical truth is confusing to Lauren should result in alarms sounding and flags flying.

I’m sure Lauren is an amazing young lady. I’m confident I’d enjoy talking with her and getting to know her. There’s much going on in her heart, and so much of it is really good. However, we can’t stop there. That can’t be the end of the story as the narrative is unresolved.

To affirm anyone who stands for Christ while also refusing to renounce that which will result in eternal separation from Christ is a mistake we cannot make.

I want Lauren to understand that I’m not attacking her. I also want her to know that she’s playing with fire, and those she loves are at great risk of Hell if she doesn’t speak up.

Regarding her position on homosexuality, Lauren said: “So when people ask questions like that … that’s what my go-to is. I just say, ‘Read the Bible and find out for yourself. And when you find out let me know, because I’m learning too.’”

Lauren, the Bible settled this matter long ago.

“While we were making this record we were constantly studying the greats that came before — Aretha Franklin, Roberta Flack, Andre Crouch, Lauren Hill — there’s just a plethora of artists that we listened to, over and over,” she said.

Interestingly enough, the young artist did not mention Jesus or God throughout the interview, sticking to general phrases like “faith,” while placing a large emphasis on the importance of love.

I want to let Lauren know that love doesn’t require affirmation of destructive behaviors or belief systems. I want her to understand that I’m not attacking her. I am excited about her future and I pray God anoints her powerfully. I am excited about a spirit of intercession and worship flooding through her into a dark and desperate culture. She could be a catalyst for repentance and revival in the world!

I also want her to know that she’s playing with fire, and those she loves — along with millions who are under her influence — are at great risk of Hell if she doesn’t speak up, reveal the urgent truth and do all she can to rescue them. Lauren, if they don’t know they are drowning they will not take your hand.