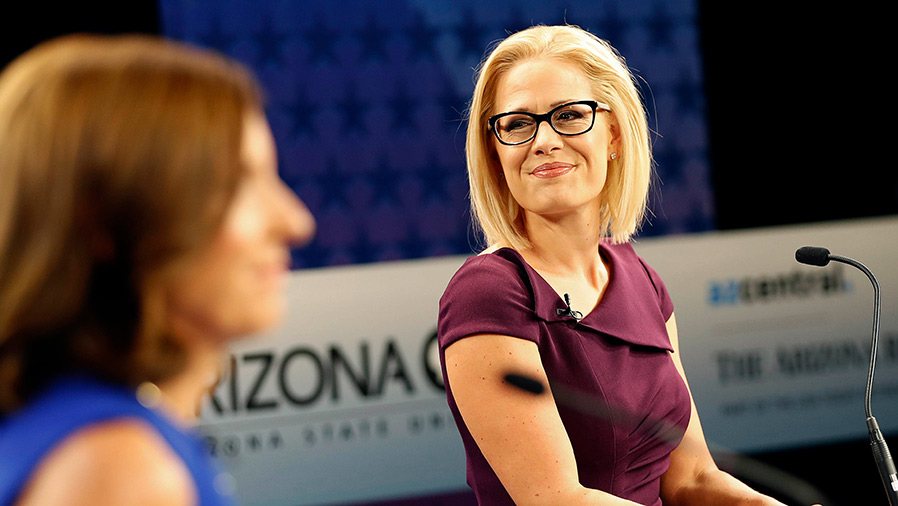 Just as Democrats try to woo suburban moms ahead of next month’s election, along comes Rep. Kyrsten Sinema (D-Ariz.) to remind us how much the Left hates us.

Sinema is running against her Republican House colleague, Rep. Martha McSally, for the open seat vacated by retiring Arizona Senator Jeff Flake. The 42-year-old unmarried bisexual atheist lawyer with a Ph.D. in Justice Studies has some interesting views on life, as you might imagine.

She once wrote that capitalism poses a danger to Americans; she was an anti-war activist in the early 2000s — one of her protest groups distributed flyers portraying U.S. soldiers as skeletons with automatic rifles; she summoned witches to one anti-war stunt; and she mocks her own (adopted) home state as a “meth lab of democracy” whose residents are “crazy.”

Not exactly a winning campaign message when you’re running in Arizona.

But it’s her 2006 profane comments ridiculing stay-at-home moms that now pose a major problem for her party, and could very well cost her the election. Then-state representative Sinema questioned the feminist cred of women who don’t work outside the home and instead chose to care for their families. “These women who act like staying at home, leeching off their husbands or boyfriends, and just cashing the checks is some sort of feminism because they’re choosing to live that life,” Sinema said during an interview with a Scottsdale magazine. “That’s bull****. I mean, what the f*** are we really talking about here?”

Sinema, who is childless, later backtracked with the old “I was joking” trope.

But as a stay-at-home mom, I applaud her for her initial honesty. Despite the Left’s phony charm offensive to attract stay-at-home moms — particularly in the suburbs — the Democratic Party’s animus towards us is well-documented. After all, Sinema simply was updating Gloria Steinem’s famous 1970 comments, “Housewives are dependent creatures who are still children . . . parasites.”

Pollsters and the media have identified suburban moms, many of whom are stay-at-home moms, as the key swing vote that could determine which party controls Congress after next month’s midterm elections. As Democrats abandon white men, the party is succeeding in replacing that lost constituency with white moms living in the suburbs. Issues like migrant families separated at the border and the victims of #MeToo are designed to pull at the heartstrings of stay-at-home moms.

But don’t be fooled, my fellow SAHMs: Democrats show nothing but disregard, if not contempt, for our lifestyle and our choices — which means they also have no grasp of our interests. From politicians to pundits to Hollywood actors and screenwriters, the Left collectively suggests that we are a group to be mocked, not valued.

While the single working mother is an object of hero-worship in the Democratic Party, there is no appreciation for the sacrifice, hard work, and contribution to the future made by women who give up careers to raise stable families. There’s no mention of us in the party’s 2016 platform even though there is a shout-out to every other race, class, age, occupation, and sexual orientation. (The RNC platform, on the other hand, devoted an entire section to “Great American Families.”) Democrats are all about choice — unless it’s the wrong choice in their opinion. Then you are worthless.

“The children are the future!” the Democrats proclaim — but only if they are raised by nannies or outsourced to daycare professionals. Those of us choose to stay home and take care of our own children every day are the objects of scorn and ridicule, even as we pick up the slack for the missing working moms at school parties, extracurricular activities, and church outings. And that’s not passing a judgment on them, necessarily. But it would be nice if we got a little credit. If it takes a village to raise a child, as the Left likes to remind us, here’s something the Left needs to factor in: We SAHMs do the (unpaid) heavy lifting for the village.

But in moments of candor, leading Democrats remind us what they really think. Who can forget Hillary Clinton’s jibe at homemakers during her husband’s 1992 run for president: “I suppose I could have stayed home and baked cookies and had teas, but what I decided to do was to fulfill my profession.”

Twenty years later, Democratic pundit Hilary Rosen sneered that Ann Romney, wife of Mitt and mother of five pretty impressive children, “never worked a day in her life.” After some backlash, Rosen redoubled her judgment: “I admire women who can stay home and raise their kids full time. I even envy them sometimes. It is a wonderful luxury to have the choice.”

In 2015, President Obama blasted that choice as bad economics when mom, “leaves the workplace to stay home with the kids, which then leaves her earning a lower wage for the rest of her life as a result. And that’s not a choice we want Americans to make.” His education secretary, Arne Duncan, mocked “white suburban moms who all of a sudden [realized] their child isn’t as brilliant as they thought they were, and their school isn’t quite as good as they thought they were” while defending Common Core standards in 2013.

And it’s not just Baby Boomer Democrats who look down on us, so too do the up-and-comers. According to the party’s It Girl, Alexandria Ocasio-Cortez, we are a mirage. The childless Democratic congressional candidate said during an August podcast interview that an upper-middle class “with soccer moms with two vans and stuff” no longer exists in America.

Kavanaugh Was a Milestone

But the Left’s biggest political misread — and one that could be responsible for sucking the electoral energy out of the blue wave — was its attempted political assassination of Brett Kavanaugh. Suburban moms saw in Brett Kavanaugh our husbands, our sons, our friends. We were alarmed at how quickly the Left abandoned due process, evidence, fairness, and decency for political triumph. If that could happen to someone like Judge Kavanaugh, it could happen to any man.

Instead of acknowledging that our fears were legitimate, they called those of us who continued to support Judge Brett Kavanaugh gender traitors and rape apologists. If ever there was an event to prove the Left shares no common ground with the values treasured by most stay-at-home moms, it was the Kavanaugh travesty.

So, rather than smite Kyrsten Sinema, Republicans should thank her. Her words are not outliers for the party she represents; they are central to its smug ideology. To them, we are yet another group to be exploited — like Parkland teens or migrant toddlers or sexual abuse victims — in their shameless pursuit of power. Just like their other human props, we will quickly be discarded when no longer useful.

Stay-at-home moms should remember this in November.

Confessions of a White Male

Do Moral Truths Change With the Times?