My friends and family are facing genocide — does anyone care?

By Juliana Taimoorazy Published on March 1, 2015 •

We woke up in Nashville on Thursday morning thinking that we would have a better day after mourning the loss of two of our Assyrian brethren who had been executed by the Islamic State three days before. As we prepared to take a taxi to the National Religious Broadcasters Convention, we logged on to our Facebook page. What we saw there broke our hearts.

My colleague and I, in complete horror, watched a video that had been posted by the Iraq Museum in which ruthless members of ISIS pushed over 7,000-year-old Akkadian statues and shattered them to pieces. Tears rolled down our cheeks as we watched in disbelief. One ISIS terrorist addressed the camera, justifying the destruction of these historical monuments for religious reasons. Less than two minutes later, we gasped as we witnessed the famous winged bull Lamassu being drilled into fragments by a man whose barbarism clearly knows no bounds. 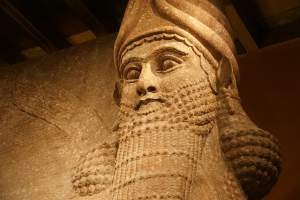 We wept bitterly in the lobby of our small hotel in the land we now call home, thousands of miles away from our ancestral Assyria. Americans walking past who saw our horrified faces and heard our sobs approached us to ask if we needed help. All we could do was look up with tear-filled eyes and say, “Please do something. We are being killed religiously and erased historically.” The confusion on their faces said it all. They did not know who we were, what faith we followed, or what history we were referring to. We showed them the video, and even though they did not know what was taking place, they knew it was important enough to send us into bereavement.

With broken hearts, hoping we were trapped in a terrible dream, we walked to the awaiting cab. But cold wind slapped us in the face, waking us up to the fact that this was not a dream — this was reality. The ancient treasures of our already-dying culture were ruined forever. We lamented that the help our nation needs may never come. My Assyrian sister whispered, “My back has been broken.”

Who do we cry to now? Who will help us?

Trembling, we walked into the convention center and made our way to the meeting hall with tears rolling down our faces. We stood outside the event for awhile, realizing that we did not have the strength to sit through it. Instead we threw our coats down and sat on the floor in disbelief.

Later, I walked inside and tried to talk to the organizer, but he was on stage. I found a man with a camera in his hand, and as I wept, showed him a few seconds of the ISIS video on my cell phone. I told him how ISIS had just penetrated this very conference through us. He stared at me in disbelief, gave me a hug and offered a heartfelt apology. He then asked to interview me on his radio show.

Later we were sitting outside the event, hearing Christian music blaring from inside, people giving their testimonies, and the audience clapping joyously. I wondered how these people would feel if, God forbid, ISIS had executed two of their relatives or a bomb had decimated the Statue of Liberty.

A Christian friend walked over to check on us. We told her everything. After a few hugs were exchanged and sympathy offered, she said, “Take heart and remain faithful, as God has brought you here to talk about this.”

It’s true. We are blessed to be here in a free land, able to write about our pain in the face of savagery.

We Assyrians are being killed and our culture is being erased because of our Christian faith. Our 2,000-year-old churches are being blown up and our manuscripts are being consumed by fire, but we will not be silent! We will roar like winged lionesses protecting what is rightfully ours.

America and all of humanity, roar with us!

This article originally appeared at Philosproject.org, and is reprinted by permission.