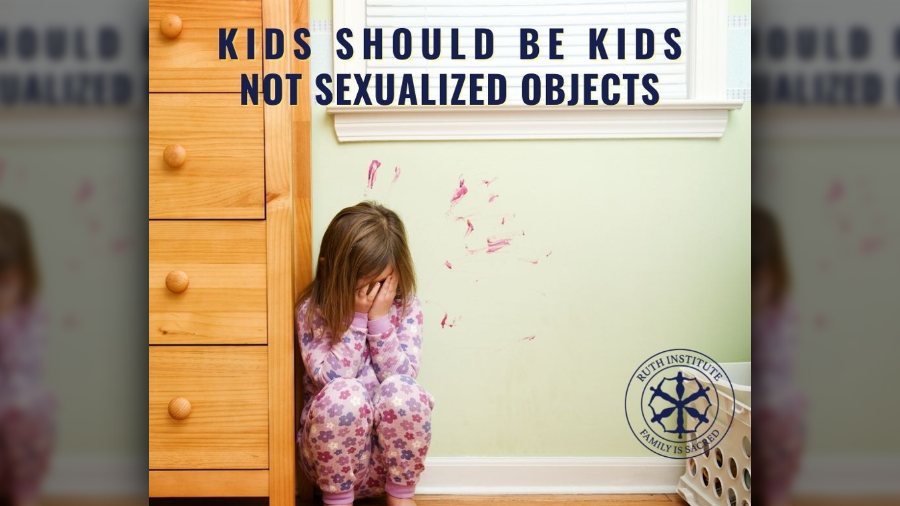 Old Dominion University placed Dr. Allyn Walker, assistant professor of sociology and criminal justice, on leave, This after Walker’s November 8 interview in which he stated that people can be sexually attracted to children (he called them “minor-attracted persons”) without acting on the desire. This echoes the argument in his book, A Long Dark Shadow: Minor Attracted People and Their Pursuit of Dignity.

Ruth Institute President, Dr. Jennifer Roback Morse, Ph.D., defended the university’s decision, adding: “I am saddened but not surprised. My research has convinced me that pedophilia has been an integral part of the Sexual Revolution from the beginning. In my interview with political scientist Scott Yenor on the Dr. J Show, we discussed the idea that Sexual Revolutionaries wanted to remove all sexual taboos, including the one against children having sex. Advocates such as Alfred Kinsey, Kate Millet and Shulamith Firestone all believed that children were ‘entitled’ to sexual activity.”

“To be fair, I don’t think they were pedophiles themselves. But once they redefined the meaning of the sexual act to be something sterile and recreational, rather than fruitful and socially significant, they had to redefine childhood.”

“In my interview with Dr. Carl Truemann, we discussed Wilhelm Reich’s belief that the world should be reorganized to allow children to have sex. No one has adequately confronted the lies and misperceptions of these pioneers of the Sexual Revolution. So, decades later, here we are, with university professors seeking to normalize those who are sexually attracted to minors.”

“I’ve talked to numerous people who were sexually abused during their childhood. I have yet to encounter a single one who said, ‘Oh, gosh, it didn’t bother me. All the adults around me were ok with it, so I was ok with it.’ No. Those now-adult children testify that they knew from the beginning that it was painful and wrong.”

Dr. Stephen Baskerville, author of A Gentleman’s Guide to Manners, Sex, and Ruling the World, was a recent guest of The Dr. J Show, the Ruth Institute’s weekly broadcast.

Morse noted: “Stephen spoke on ‘How No-Fault Divorce Empowers the State’ at our 2019 Survivors’ Summit and was one of our first guests on the Dr. J Show. Given the Sexual Revolution’s attack on masculinity, we were particularly interested in having him back to explore that aspect of his book.”

During the interview, Baskerville explained:

Sophia Institute Press, the publisher of A Gentleman’s Guide, stated: “Dr. Baskerville presents here the frankest guide to manners and morals ever written, offering you a refreshingly honest guidebook on how to become not just a man in the modern world but a gentleman.”

Morse added: “Men must reassert their traditional role in the family and society. Many of the social problems which plague us: crime, drug abuse and dependency, begin with the absence of the father in the home. Society pays a heavy price for the war on masculinity.”

Do You Know What’s in Your Children’s Books?

Deborah DeGroff became interested in children’s books when her oldest child began to read. While perusing the then-current literature of the eighties, she noted the qualitative difference between those books and the books she had read as a child. Upon further investigation, her curiosity shifted to concern. Thus began a lifetime of research and a resounding cry for parents to look inside their children’s books.

“I never wanted to write a book,” DeGroff explains. “I just wanted to make parents aware of what’s inside these books and encourage them to begin reading their own children’s books. I wanted to teach them what to look for as they read.”

The result of DeGroff’s research is Between the Covers: What’s Inside a Children’s Book, in which she connects the “dumbing down” of school textbooks to a simultaneous shift from moral instruction to amoral, and ultimately to today’s immoral indoctrination of children.

Watch the Dr. J Show as DeGroff walks you through what can be found in today’s popular children’s books. Educate yourself to protect the innocence of your children and grandchildren.

Videos from the Ruth Institute’s 4th Annual Summit for Survivors of the Sexual Revolution are being released one by one on the Ruth Institute YouTube channel. Here is attorney Mary E. McAlister of the Child & Parental Rights Campaign, explaining the legal basis for parental educational rights, how far those rights extend, and what parents can do against schools’ efforts to radicalize their children.