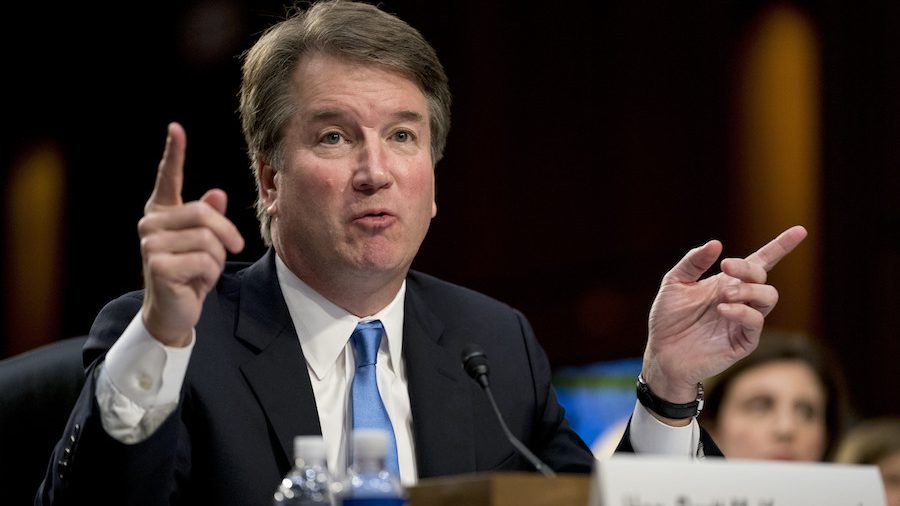 The judge’s responses run over 250 pages, though many referred back to answers given during his confirmation hearings and other public writings.

As in the hearings, Kavanaugh was evasive when pressed for his views on abortion and related social issues.

“As a sitting judge and nominee, principles of judicial independence prevent me from speculating about hypothetical contingent events, particularly involving a controlling precedent of the Supreme Court,” he wrote in response to a question about the events that would follow the overruling of Roe v. Wade.

GOP Sen. Chuck Grassley of Iowa, who chairs the committee, asked Kavanaugh to address his fleeting encounter with Parkland, Florida, parent Fred Guttenberg, whose daughter Jaime Guttenberg was killed during a Feb. 14 massacre. Fred Guttenberg approached the judge as he left the witness table for a recess — images of Kavanaugh avoiding the advance circulated widely in social media.

“As I was leaving the hearing room for a recess last Tuesday, a man behind me yelled my name, approached me from behind, and touched my arm,” Kavanaugh wrote in response to Grassley’s question. “It had been a chaotic morning with a large number of protestors in the hearing room. As the break began, the room remained noisy and crowded. When I turned and did not recognize the man, I assumed he was a protestor. In a split second, my security detail intervened and ushered me out of the hearing room.”

“In that split second, I unfortunately did not realize that the man was the father of a shooting victim from Parkland, Florida,” he added. “Mr. Guttenberg has suffered an incalculable loss. If I had known who he was, I would have shaken his hand, talked to him, and expressed my sympathy. And I would have listened to him.”

The judge also said that he did not ask Capitol Police to remove him, contrary to Guttenberg’s own assertions after the fact.

It was Democrats who submitted the overwhelming majority of questions, asking Kavanaugh to respond to 1,278 questions. Grassley staffers noted that five Democratic lawmakers who have already committed to opposing Kavanaugh relayed a combined 586 questions to the judge.

“Submitting this many written questions appears to be just one more effort to gum up the process,” Grassley said in a statement. “It’s unnecessary and dilatory, especially when many have already decided to vote against Judge Kavanaugh. What more do they need to know to vote ‘no’?”

The Democratic questions covered a wide range of topics, including debts he accrued buying baseball tickets, his relationship with a prominent federal judge accused of sexual misconduct, and a possible appointment in the Trump administration.

The Washington Post reported in March 2017 that Kavanaugh’s interest was gauged in serving as solicitor general, the Department of Justice official who represents the U.S. before the Supreme Court. Kavanaugh confirmed the report in his responses, saying he had preliminary discussions with then Sen. Jeff Sessions about the position, but chose to remain on the U.S. Court of Appeals for the D.C. Circuit.

“I was uncertain about it, but I was interested in learning more,” he wrote. “I ultimately decided that I wanted to remain a judge. I kept my Chief Judge — Chief Judge [Merrick] Garland — apprised about this in real time.”

Kavanaugh was elsewhere asked about debt assumed buying tickets for the Washington Nationals baseball team, telling senators he currently carries no debt other than his home mortgage. He denied ever holding gambling debt in response to a battery of questions from Democratic Sen. Sheldon Whitehouse of Rhode Island, who asked about past visits to New Jersey casinos as well as a September 2001 email that alluded to a game of a dice.

After his confirmation hearings, Democratic Sen. Kamala Harris of California and progressive interest groups circulated an edited clip of Kavanaugh’s comments respecting a case involving a First Amendment challenge to the Affordable Care Act’s contraception mandate. The clip purported to show Kavanaugh referring to ordinary contraceptives as “abortion-inducing drugs,” though the attack was widely debunked by fact checkers.

The judge told Democratic Sen. Richard Blumenthal of Connecticut that he used the phrase to describe the arguments of the plaintiffs in that case, who were Catholic priests.

“That was the position of the plaintiffs in that case, and I was accurately describing the plaintiffs’ position,” Kavanaugh wrote. “At the hearing, I was not expressing an opinion on whether particular drugs induce abortion; I used that phrase only when recounting the plaintiffs’ own assertions.”

The Senate Judiciary Committee is expected to forward Kavanaugh’s nomination to the full Senate on Sept. 20.

At the Moment, Kavanaugh is Probably Best Confirmable Judge for the Supreme Court