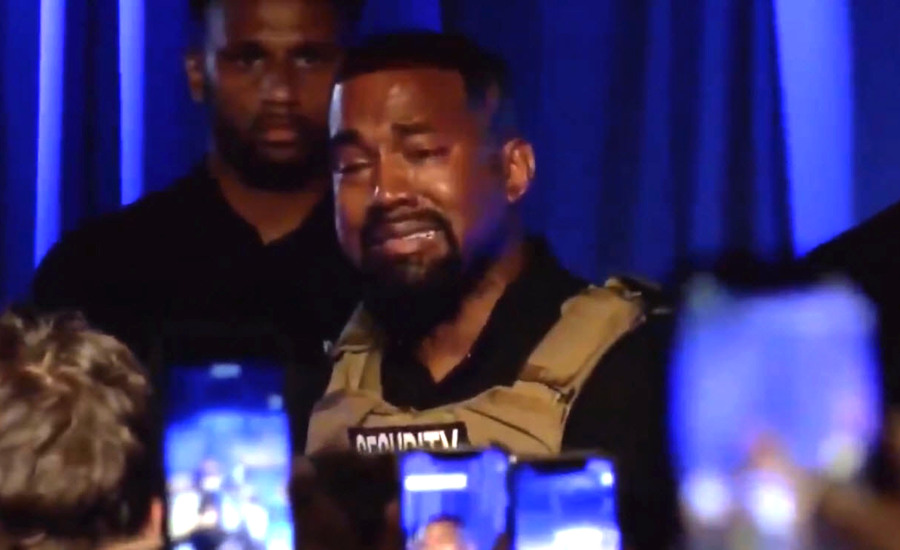 “I cried at the thought of aborting my first born and everyone was so concerned about me,” Kanye West tweeted. Pictured: West tearfully shared his experiences with abortion while speaking in South Carolina on July 19, saying, "My Mom saved my life. My Dad wanted to abort me ... There would have been no Kanye West." Overcome with emotion, he then shouted, "I almost killed my daughter."

Rapper Kanye West took another swing at abortion Friday morning, tweeting that he “cried at the thought of aborting” his first born child.

“I cried at the thought of aborting my first born and everyone was so concerned about me…” he tweeted. “I’m concerned for the world that feels you shouldn’t cry about this subject.”

I cried at the thought of aborting my first born and everyone was so concerned about me… I’m concerned for the world that feels you shouldn’t cry about this subject.

West, who announced a presidential bid on the Fourth of July, has frequently spoken out against abortion as a tool of the Democratic Party to oppress blacks and tearfully shared his own experiences with abortion July 19.

He then went on to explain how he had pressured his wife, Kim Kardashian, to abort their daughter North when he first learned Kardashian was pregnant.

Kanye West gets emotional while speaking about abortion in South Carolina:

"My Mom saved my life. My Dad wanted to abort me… There would have been no Kanye West."

"I almost killed my daughter." pic.twitter.com/jiGuODxAno

“[Kim Kardashian] called me screaming and crying … she said, ‘I’m pregnant,’” West said. “She said she was pregnant and for one month, and two months, and three months we talked about her not having this child.”

The rapper later publicly apologized to his wife “for going public with something that was a private matter” and visited a hospital to seek help with his anxiety. Kardashian has defended her husband and said he is suffering from bipolar disorder.

“He is a brilliant but complicated person who on top of the pressures of being an artist and a black man, who experienced the painful loss of his mother, and has to deal with the pressure and isolation that is heightened by his bi-polar disorder,” she said, according to Page Six. “Those who are close with Kanye know his heart and understand his words do not align with his intentions.”

“Planned Parenthoods have been placed inside cities by white supremacists to do the Devil’s work,” he said in an interview with Forbes published July 8 where he discussed his disillusionment with President Donald Trump, his political beliefs, and his hopes for a West presidency.

West referenced Planned Parenthood founder Margaret Sanger, who had a history of pro-eugenics comments and spoke of targeting black communities with birth control through “The Negro Project.”

“I am pro-life because I’m following the word of the Bible,” he told Forbes.