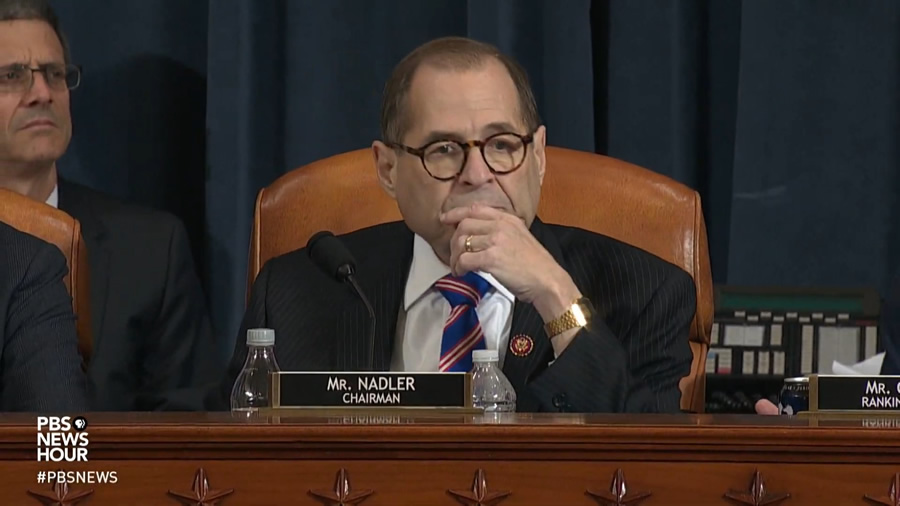 Today starts the House Judiciary Committee’s impeachment hearings, not with any evidence of wrongdoing (because there wasn’t any), but with several legal professors offering their opinions — again with the opinion — of whether or not this President warrants impeachment. Before they get into that, I think it would be a great idea if Rep. Doug Collins of Georgia, ranking member of the committee, began his opening statement on Wednesday (or any day of the hearings, for that matter) with these words:

Collins: “To inject a note of bipartisanship into these extremely partisan proceedings, I’d like to quote from our esteemed chairman from the Democratic side, Jerrold Nadler, when he was a congressman in 1998, on the issue of impeachment:

(ahem) “‘The effect of impeachment is to overturn the popular will of the voters as expressed in a national election. We must not overturn an election and remove a President from office except to defend our very system of government or our constitutional liberties against a dire threat. And we must not do so without an overwhelming consensus of the American people and of their representatives in Congress of the absolute necessity.

“‘There must never be a narrowly voted impeachment or an impeachment substantially supported by one of our major political parties and largely opposed by the other. Such an impeachment would lack legitimacy, would produce divisiveness and bitterness in our politics for years to come, and will call into question the very legitimacy of our political institutions.’

(Collins, continuing) “That was our esteemed chairman, Jerrold Nadler in 1998. No matter what anyone thinks today about the impeachment of President Clinton, it cannot be argued that he did not break the law. He absolutely did, and truly brought shame upon the Oval Office. Here, we have a situation that is inherently political in nature, with no crime, and yet the chairman of this committee has set aside what he said in 1998. That alone should tell the American public all they need to know about the blatant hypocrisy going on here today.”

That’s what Rep. Collins should say for the record. If the quote from Nadler is familiar, it’s probably because you read my newsletter or visited my website on Tuesday. I include it again today, right up front, to make sure you didn’t miss it and also to make the point that it absolutely needs to be read into the record at the hearing.

Anyone who can’t see the double standard at work in 2019 has got to be higher than Jerry Nadler’s pants. Now, that’s impaired.

Anyway, here we go to the next round of hearings, and, as part of its hand-off to the Judiciary Committee (where such proceedings normally start), the House Intel Committee has released its report. Republican House Intel Committee member Brad Wenstrup of Ohio said to Sean Hannity on Tuesday, “Frankly, after reviewing the document today, I don’t think America’s ready to bow to Adam Schiff’s superior imagination, if you will. It’s been interesting the last three years, everything they falsely accuse people of doing are things they’ve actually done themselves.”

Hey, we’ve been pointing that out from the start.

Wenstrup continued, “I think that our team on the Judiciary Committee is just as prepared as we were on the Intelligence Committee to let America know the truth, and there’s nothing impeachable here.”

As for Schiff’s 14,000-word impeachment report, it was approved Tuesday evening, as expected, on a straight party-line vote, as expected. Goodness, how could any patriotic member of Congress not vote for this, with its reference to George Washington himself at the top? (Still, the Washington Post reports that to bolster their case, Democrats may add new articles based on … drum roll please … the Mueller report.) Hilariously, Schiff told reporters he’s “going to reserve judgement” on whether or not to vote for impeachment. You know, I don’t think he’s capable of telling the truth, even if doing so — for once — would actually help him.

Alan Dershowitz describes Democrats’ attempt to tar the President with obstruction-related charges as “much worse than weak — it’s extremely dangerous” to the founding fathers’ notion of the balance of power, and it’s certainly not grounds for impeachment. And Michael Goodwin at the New York Post has a great column on Schiff’s report, complimenting him on his skills as a sensationalist.

I also like the way Sean Hannity described it, “chock full of nothing but conspiracy theories, left-wing opinions, conjecture, hearsay witnesses, complaints about Donald Trump’s foreign policy by people who think they’re more important than a duly-elected President and a whole lot of outright lies.”

Republicans released their own report, shredding Schiff to shreds (pardon my fun with alliteration).

Of course, while all this is going on, we’re still waiting for Monday’s release of the Horowitz report, which, as I’ve warned, might possibly turn out like the typical internal sweep-the-dirt-under-the rug investigation, at least in part. If reports are accurate that Attorney General Bill Barr does not agree with all of its conclusions, he’s bound to have very solid reasons for that. (And no, he’s not acting as “the President’s lawyer.”) Paul Sperry at RealClearInvestigations has put together an outstanding look at Inspector General Michael Horowitz’s track record for cutting his colleagues unwarranted slack, and it is quite dismaying. I’ve already mentioned the example of his off-the-wall determination in the FBI’s probe into Hillary’s email server, but there’s more: take a look at the numerous other times Horowitz has pulled punches or let things slide.

As I’ve said, wait for U.S. Attorney John Durham’s report, which is a criminal investigation.

According to investigative reporter John Solomon, there will be 6 to 12 major factual issues concerning mistakes or abuse that the IG has identified in his report. Some are very serious, such as the intentional falsifying of FISA documents and withholding exculpatory statements, as from George Papadopoulos and Carter Page. Solomon made this prediction on Tuesday’s Hannity show:

I think the report is going to reveal that back in 2015, the FBI was warned by Great Britain that there were concerns about Christopher Steele’s reliability, specifically his use of sub-sources. And remember, why is that important? The FBI claimed in that footnote they had no derogatory information about Christopher Steele. I think that’s going to be a big highlight in the report.

The problem here, though, is whether Horowitz acknowledges this for what it had to have been, deliberate fraud perpetrated on the FISA court, or treats it as just a case of “bungling.” If he excuses this travesty and says simply that “mistakes were made,” that will not be acceptable, not by a long shot. We’re wise to this tactic. It’s happened too many times. “Mistakes” on this scale and at this level don’t happen for no reason. And the top people at the FBI made their motives crystal clear.

In the meantime, if you plan to watch the “legal experts” testify Wednesday, guard your brain cells and your blood pressure. Take breaks, walk around the block, breathe some fresh air. Remember: we watch the hearings so you don’t have to!