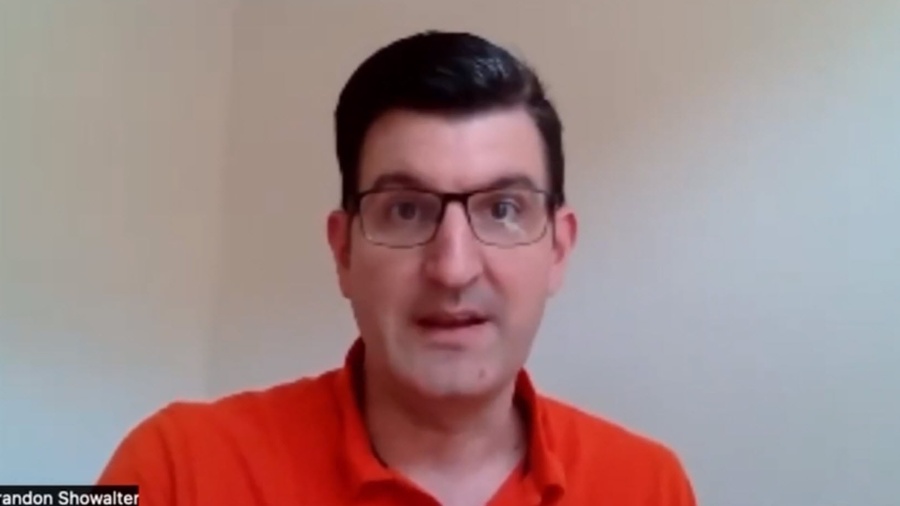 This week’s Dr. J Show features Brandon Showalter, the lead reporter for The Christian Post on transgenderism, or as he calls it, “One of the worst medical scandals the world has ever seen.”

Brandon says when he began investigating the trans issue and learning more about what’s being done to children, “Something inside me snapped. I was never the same again.”

“Families are torn apart by this. It’s like a bomb goes off inside a home … Social contagion is very clearly evident … Girls having double mastectomies is all the rage now. They post pictures of their chest scars on Instagram. That’s how parents find out about it.”

“You would think, ‘Do no harm,’ but no. There’s this whole cottage industry that they’re shepherding kids into. They’ve gotten cross-sex hormones from Planned Parenthood. That’s how they’re making money now … They like to say there’s a big mental health examination before you get these hormones. No. I’ve talked with people who have gotten it on the spot.”

Brandon uncovered eight-year-old girls getting cross-sex hormones in federally-funded research. “They’re experimenting with children. When I saw that, I thought my eyes were going to bug out of my head. It was one of those gut-wrenching moments when I knew I had to report something extremely difficult, but the public had to know about it … Testosterone given to eight-year-old girls … It’s unconscionable.”

Brandon also shares about a “trans” man who was “the most tormented soul I’ve ever talked to… The carnage of what they did to this poor man’s body was terrible.” The man eventually realized it was all a lucrative scam. “I’m not trans. I’m not born in the wrong body,” he said.

“People are going to have to get accustomed to hearing about these horrible things because unless they’re exposed to the grisly realities of what goes on in these surgical centers, the atrocities are never going to stop.”

The full interview is available to members of the Ruth Institute Community. Be warned: this video contains gut-wrenching stories and graphic images of actual trans surgeries.

“This is an outrageous invasion of privacy and a blatant attempt to promote transgenderism,” said Ruth Institute president Dr. Jennifer Roback Morse, Ph.D., of a survey distributed to D.C. children as young as 11.

“The survey asks students about their ‘gender identity’ and ‘sexual orientation,’ but children do not normally ask themselves whether they are ‘trans’ or not. That thought has to be planted in their minds,” Morse noted.

“Children are notoriously susceptible to the power of suggestion. Perhaps these leading questions are part of why referrals for transgender medical interventions have increased by almost 400%.”

The school district claims information from the survey will “help the district promote equitable treatment for all students in accordance with our Transgender and Gender-Nonconforming Policy Guidance.”

Morse responded: “In other words, the policy is already in place. With a real survey, information is collected on which policy is later based. Here, the data will be used to justify policies the district already has.”

“The objective is to provide ammunition to use against parents who object to schools allowing students to choose new names or pronouns that teachers and others are required to use.”

“What a remarkable coincidence,” Morse commented. “Last year, Garland wanted to investigate as domestic terrorists, parents who object to the sexualization of their children, including giving biological boys access to girls’ rooms. Between Garland and Tanner, it seems like sexualizing children is a family business.”

“And let’s not overlook the Zuckerberg connection. Besides backing Panaroma, Zuckerberg is the president and CEO of Facebook’s parent company, Meta. The social media giant is notorious for shutting down honest discussions of sexual identity and orientation, among other controversial matters.”

“Apparently, the parents’ revolt of 2021, which helped Virginia elect a conservative governor, is still fighting an uphill battle,” Morse said. “The forces of the Sexual Revolution, which largely control public education, are determined to use whatever means necessary to push their ideological agenda.”

Learn more on the dangers of the transgender ideology from the Ruth Institute’s Transgender Resource Center.

This means Florida’s Medicaid program will not pay for these procedures. Contrary to media reports, this ruling does not ban or make these treatments crimes.

“However, the taxpayers of Florida will no longer be paying for these treatments through Medicaid. Individuals who are paying, or whose insurance is paying, for their treatment, will not be prohibited from obtaining or continuing that treatment.”

“The report by Dr. Quentin Van Meter was particularly striking,” Morse said. “After cataloguing the unknown risks associated with brain development, bone density, and other factors, the President of the American College of Pediatricians stated wryly, ‘It is very difficult to imagine ethical controlled clinical trials that could elucidate the effects of delaying puberty until the age of consent.'”

Florida now joins the U.K., Sweden, Finland, and Australia in contesting the wildly inflated claims that these medical interventions are necessary and harmless.

Morse concluded, “We have heard numerous stories of young people being stampeded into these life-altering interventions with little or no attempts at less invasive solutions to their problems. The Florida ruling may prove significant for future malpractice claims against doctors who advise these treatments without due caution.”