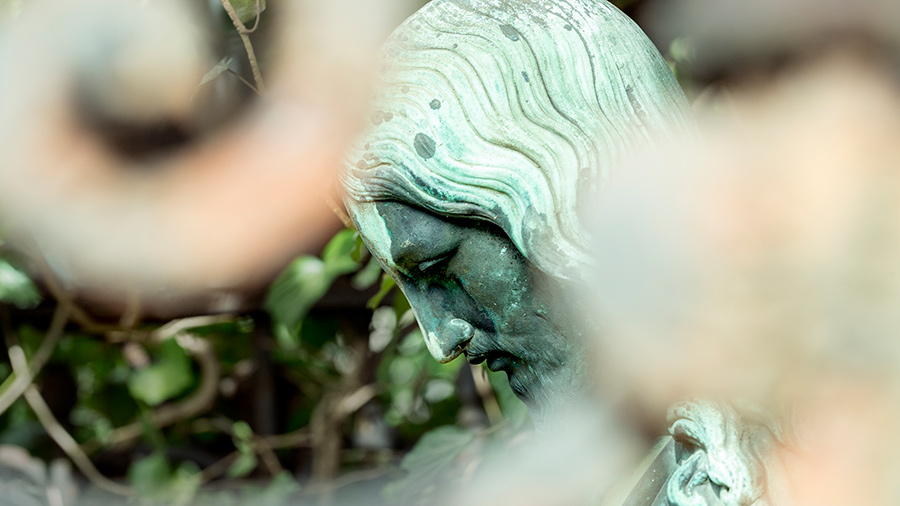 Which leads me to wonder how Jesus would have handled the bright lights. Using His own words, let’s try to imagine the Lord fielding questions about His views on human sexuality.

Interviewer: Now, Jesus — uh, do you prefer being called Lord?

Interviewer: OK, so your popularity still runs high, and lots of people still look to You as the final authority. We legalized same-sex marriage here in America years ago, and lots of people, even some of Your followers, have come around to accepting it. Where do You stand on this?

Jesus: From the beginning He created them male and female. (Matthew 19:4)

Interviewer: Well, now, surely that’s a throwback to the Old Testament. Isn’t the old law of Moses a bit antiquated for today’s discussion?

Jesus: Think not that I came to destroy the law. I came not to destroy it, but to fulfill it. (Matthew 5:17)

Interviewer: Aha! Then doesn’t it say in Leviticus that homosexuals should be put to death? Is that what You’re advocating?

Jesus: Let him that is without sin cast the first stone. (John 8:7)

Interviewer: That would be nobody.

Interviewer: So You’d prefer we stick to the traditional Ozzie and Harriet style family arrangement? How would that play out in 2018?

Jesus: For this cause shall a man leave his father and mother and cleave to his wife. What God has joined together, let no man set asunder. (Mark 10:7-9)

Interviewer: That’s it? Stuck for life? What if both the man and the woman are miserable together?

Jesus: I say unto you, if a man put away his wife for any cause other than porneia (an invalidating sexual offense), he causes her to commit adultery. (Matthew 5:32)

Interviewer: You probably just lost at least half of our listeners.

Jesus: This is a hard saying. Not every man can receive this saying. (Matthew 19:11)

Interviewer: No, and not everyone will agree with it, either. In fact, based on what You just said, a lot of people would call for Your resignation.

Jesus: Everyone practicing evil hates the light, and does not come to the light, lest his deeds be exposed. (John 3:20)

Interviewer: Well, You’re promoting a pretty rigid definition of family, not to mention morality. I mean we’re all sexual creatures. I can’t help but look at a beautiful woman when she walks by. Surely You don’t have a problem with that?

Jesus: If a man looks upon a woman to lust after her, he has committed adultery in his heart. (Matthew 5:28)

Interviewer: Now you lost me. I might lose my job for saying this, but I do that almost every day. Still, if I were sorry that I do it and resolved not to do it again, what would you say?

Interviewer: That’s nice, but a lot of gays and lesbians don’t feel very forgiven by You or Your followers. What would You say to those who claim that God doesn’t condemn them for being same-sex attracted?

Interviewer: So You’re not against lesbians and gays and trans people?

Jesus: God sent not His son into the world to condemn the world, but that the world through Him might be saved. (John 3:17)

Interviewer: Perhaps, but that world you’re talking about is coming to agree that homosexuality is a natural variation of human sexuality. Most educated people agree on that, and as I said before, plenty of people who say they belong to You are switching to pro-gay positions as well.

Jesus: Many false prophets will rise up and deceive many. And because iniquity will abound, the love of many will wax cold. (Matthew 24:11-12)

Interviewer: But aren’t you condemning something that goes to the very nature of so many people? Whether we’re gay, or straight, or bi, isn’t that just an indicator of what’s truly inside us?

Jesus: For out of the heart proceed evil thoughts, murders, adulteries, fornications, thefts, false witness, blasphemies. These are the things which defile a man. (Matthew 15:19)

Interviewer: So You would call on people to simply deny who they really are rather than simply be themselves and relate in the way that’s most natural to them?

Jesus: If any man come after Me, let him deny Himself, take up his cross, and follow me. (Matthew 16:24)

Interviewer: Even if that means saying “no” to a person’s most basic desires? Would you really ask that of anyone, even Yourself?

Jesus: Foxes have holes, and the birds have their nests, but the Son of Man has no place to lay His head. (Matthew 8:20)

Interviewer: I’m sure You realize that people are blogging right now about Your words, and this will wind up on Youtube. You’re going to lose a lot of support because of Your positions.

Interviewer: But what would You say to those who believe in You but also identify themselves as gay, and are in same sex relationships?

Interviewer: A lot of Your followers still agree with You, but You’ll notice they’re getting a lot of heat for it. Some of them are even getting sued and losing their jobs because they stick to this position. Anything You’d like to pass on to them?

Interviewer: People will want to reach You. How can they contact You?

Jesus: Come unto Me all ye that labor and are heavy laden, and I will give you rest. (Matthew 11:28)

Originally appeared at JoeDallas.com. Republished and adapted with permission.