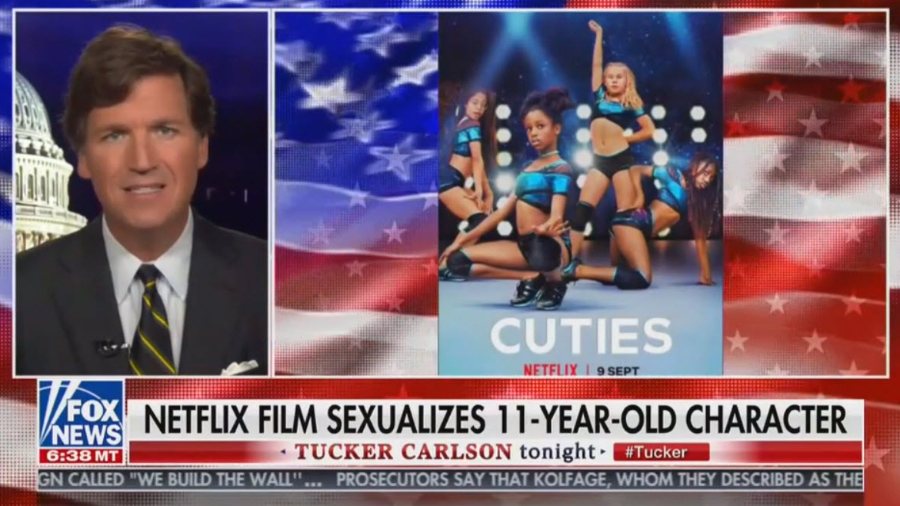 The Tucker Carlson Tonight host discussed Cuties, a film scheduled to release Sept. 9 that tells the story of 11-year-old Amy, a French girl who “joins a group of dancers named ‘the cuties’ at school, and rapidly grows aware of her burgeoning femininity,”
according to the movie’s description.

Carlson drew attention to a now-removed poster for the film that showed four young girls posing on a stage while dressed in tight outfits with exposed midriffs. Netflix apologized for the poster Thursday and updated the images, saying the company was “deeply sorry for the inappropriate artwork” in a statement to the Daily Caller News Foundation.

“Take a look at the poster,” Carlson said. “What’s the first thing you think of? It’s sexualizing young girls, really young girls, not 16-year-old girls, like 11-year-old girls. The poster shows them dancing in cropped dance costumes. Some parents are offended — you should be offended by this — they’re trying to get Cuties removed from Netflix.”

Scheduled for release Sept. 9, the French film Cuties tells the story of 11-year-old Amy, a French girl who “joins a group of dancers named ‘the cuties’ at school, and rapidly grows aware of her burgeoning femininity — upsetting her mother and her values in the process,” according to the movie’s description. The film is rated TV-MA for nudity and language, according to Netflix.

“Why this constant impulse to sexualize young girls, from the people who tell us they are protecting girls,” Carlson asked National Review film critic Armond White. “What is this?”

“It’s not really new, Tucker,” Armond said, noting that since singer Madonna appeared on the scene, the “media has found a way to influence and ruin young generations,” and saying that MTV is “based on the pernicious indoctrination of young people into sex and alcohol and drugs.”

Carlson said that if someone were to hand out cigarettes to children, they would be “seen as a villain.”

To read more on this topic, see Nancy Flory’s “The Hypersexualization of Children in Dance and Today’s Culture: What Parents Should Know.”

“This is so much worse than handing our Marlboros, because it corrodes people inside, it helps shape the course of their lives in a really bad direction, and yet we don’t even know the names of the people who are pushing this crap,” Carlson said. “Why don’t the rest of us say something about it?”

Armond said that Hollywood uses “sex to lure young people’s imaginations, and to get them concentrated on self-abasement, self-abuse, and self-exploitation,” telling these young people that “this is the route to fame.”

“Do you have any idea why they would want to destroy young girls?” Carlson asked Armond.

“Pop-culture can be better than this, […] we should demand better of it,” he added.

Is God Responsible for a Pedophile’s Attractions?