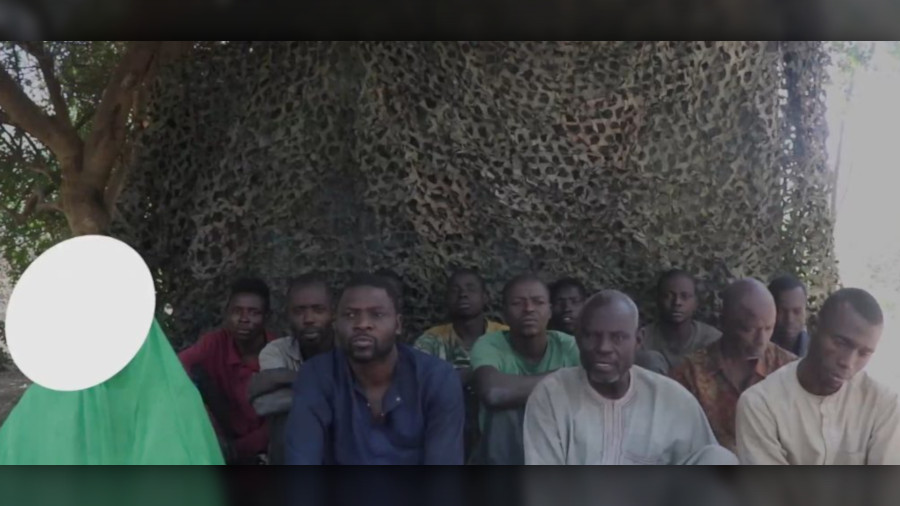 This screenshot of a Dec. 17 Islamic State video, taken by news site salkida.com, shows Christian hostages appealing to the Nigerian government to secure their release.

The Islamic State (IS) on Thursday released a video that allegedly shows the killing of 11 Christians, 10 of whom were beheaded.

As part of a campaign to avenge the death of former IS leader Abu Bakr al-Baghdadi, the Islamic State released a video that they say shows the killing of 11 unidentified Christian men who IS “captured in the past weeks” in the north-eastern Borno State in Nigeria, according to the BBC.

IS released the video on December 26, a move analysts told the BBC is intended to coincide with Christmas Day.

“We killed them as revenge for the killing of our leaders, including Abu Bakr al-Baghdadi and [IS spokesman] Abul-Hasan al-Muhajir,” a member of the Islamic State’s media unit said, a journalist who was originally sent the video told BBC. The publication notes that the Nigerian government has not yet commented on the video.

The video, which appears to be filmed in an unidentified outdoor area, shows ten of the men pushed to the ground and beheaded while a man in the middle is shot dead.

The beheadings are probably the work of ISWAP or the “Islamic State West Africa Province,” the BBC notes, a faction of the Nigerian Islamist group Boko Haram that broke away in 2016. ISWAP is also active in Burkina Faso, Cameroon, Chad, Niger and Mali. ISWAP is believed to be currently holding dozens of captives in Nigeria.

Gunmen Kill Christians, Pastor in Burkina Faso as Attacks Against Christians Increase at an ‘Alarming Rate’