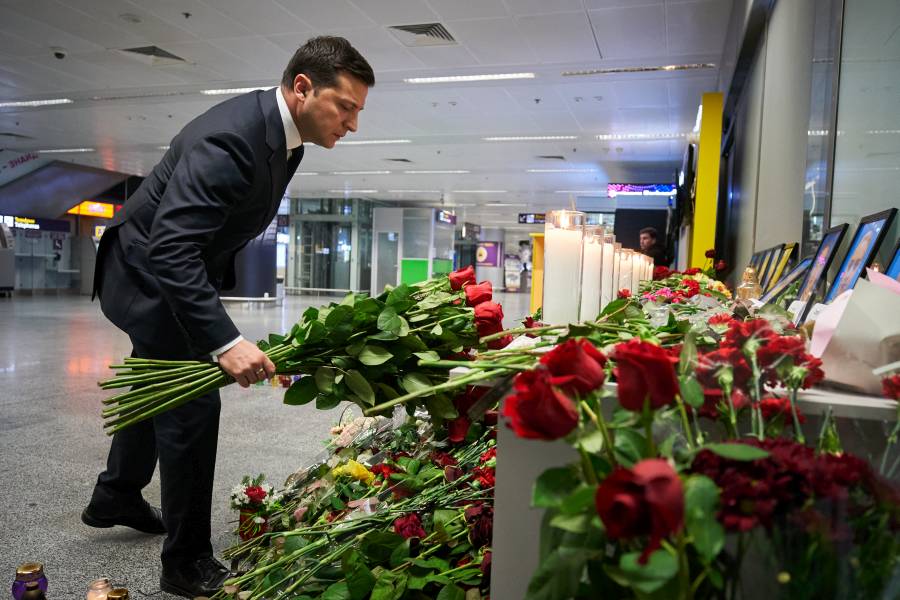 Ukrainian president Zelenskiy laying flowers at a makeshift memorial in Kiev for those killed in shooting down of a Ukrainian passenger jet in Iran.

The Iranian military apologized Friday for shooting down a commercial airliner bound for Ukraine, and blamed “human error” for launching the missile that took down the airplane, according to Iranian state media.

“The plane was accidentally hit by a human error, which unfortunately results in the martyrdom of dear compatriots and the death of a number of foreign nationals,” the military’s general staff said in a statement published by the Islamic Republican News Agency.

The statement is a reversal from the Iranian government’s claim Wednesday that the plane, a Boeing 737, crashed due to mechanical failure.

U.S. officials disputed that claim, and said intelligence showed Iran fired Russia-made missiles that took down the plane, killing all 176 people aboard.

The plane was hit early Wednesday local time near Tehran, shortly after the Iranian military fired ballistic missiles at an Iraqi military base that houses American troops.

The Iranian military in its statement attributed the “human error” to the chaotic scene following the Iranian missile attack on the Iraqi base. There were no casualties from the attack.

“In the hours after the missile strikes, US terrorist forces’ warplanes around the country increased, and some reports of air strikes targeting strategic centers in the country were reported to numerous defense units and targets on some radar plates. It has caused more sensitivity in air defense units,” the statement said.

The military said after the airliner departed Khomeini airport in Tehran, it flew “in close proximity” to a military installation for Iran’s Revolutionary Guard Corps. The statement said the airplane was “in the height and shape of a hostile aircraft.”