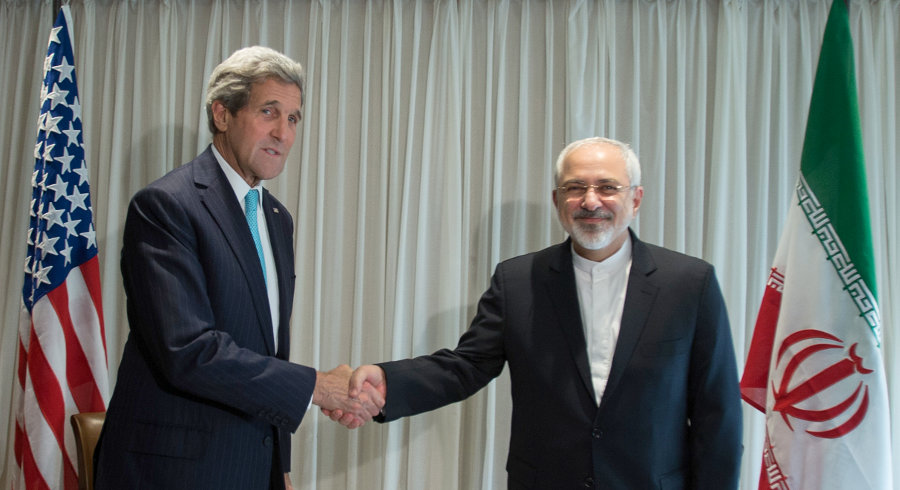 Secretary of State John Kerry met with Iranian Foreign Minister Javad Zarif in Geneva on January 14, 2015 for a bilateral meeting to provide guidance to their negotiating teams before their next round of discussions, which began on January 15.

UNITED NATIONS (AP) — Iran asked the United Nations on Thursday to intervene with the U.S. government over a Supreme Court ruling that allows nearly $2 billion in frozen Iranian assets to be paid to victims of terrorist attacks for which the Middle Eastern country has been blamed.

In a letter to Secretary General Ban Ki-Moon on Thursday, Iran’s Foreign Minister Javid Zarif argues that the U.S. court decision will have “catastrophic implications” and “will cause systematic erosion” of the principal of state immunity.

“I wish to call on Your Excellency to lend your good offices in order to induce the US Government to adhere to its international obligations, put an end to the violation of the fundamental principle of state immunity,” the letter reads in part.

The Secretary General’s office did not immediately reply to a request for comment on the letter.

The U.S. Supreme Court ruled last week that the families of victims of a 1983 bombing in Lebanon and other attacks linked to Iran can collect nearly $2 billion in frozen funds from Iran as compensation.

The U.S. court’s ruling directly affects more than 1,300 relatives of victims, some who have been seeking compensation for more than 30 years. They include families of the 241 U.S. service members who died in the Beirut bombing.

Iran denies any links to the attacks.

“The Islamic Republic of Iran holds the United States Government responsible for this outrageous robbery, disguised under a court order, and is determined to take every lawful measure to restore the stolen property and the interest accrued to it from the date it was blocked by the United States,” the letter stated, adding that U.S. should instead pay Iran reparations over the downing of a Iranian airliner in 1988.

The letter comes amid Iranian complaints that they have been unable to access the international financial system despite sanctions relief outlined in a deal reached on Iran’s nuclear program.

U.S. officials have said they are trying to address Iranian complaints.

Secretary of State John Kerry, who met Zarif last week, said the United States would not stand in the way of foreign banks or firms doing business with Iranian companies that are no longer subject to U.S. sanctions.

Kerry said the administration was willing to further clarify what transactions are now permitted with Iran and urged foreign financial institutions to seek answers from U.S. officials if they have questions.