Rep. Schiff says, "We know that this whole smear on Joe Biden comes from the Kremlin." But the director of national intelligence says that is "simply not true.” 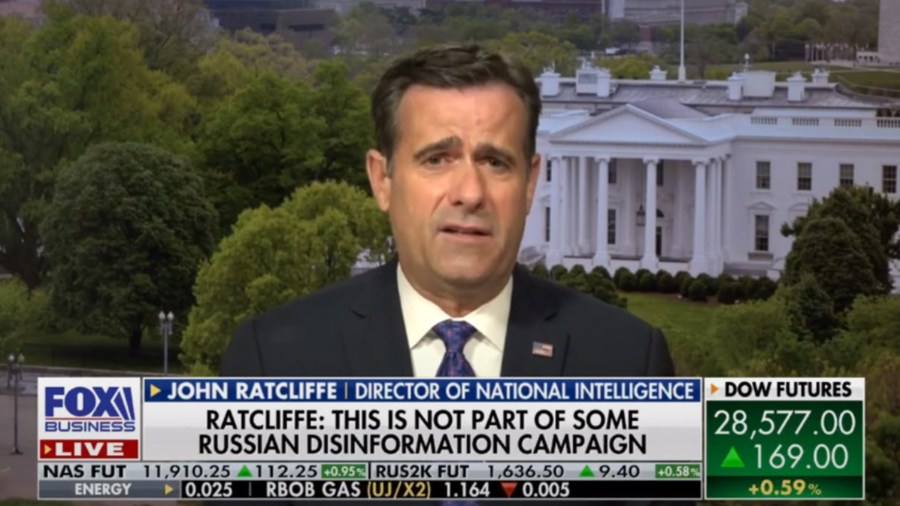 John Ratcliffe, the director of national intelligence, said Monday that the intelligence community does not have evidence that the release of emails from Hunter Biden’s purported laptop is part of a Russian intelligence operation, as Rep. Adam Schiff and other Democrats have suggested.

“It’s simply not true,” Ratcliffe said in an interview on Fox Business’ Mornings with Maria when asked about Schiff’s claim.

In an interview on Friday, Schiff accused President Donald Trump of aiding Russia’s propaganda efforts when he touted a series of New York Post stories based on emails purported to be from Biden’s laptop.

Rudy Giuliani, a personal lawyer for Trump, provided the alleged Biden documents to The Post. He claims he obtained them from the owner of a computer shop in Delaware who says that Biden dropped of his computer for repair in April 2019 but never came back to get it.

Schiff and other Democrats have suggested that Russia may have been involved in either obtaining the emails or helping release them. They have pointed to Giuliani’s interactions late last year and earlier this year with Andrii Derkach, a Ukrainian lawmaker who the U.S. government sanctioned last month because of his ties to Russian intelligence.

“Let me be clear,” he said Monday, “the intelligence community doesn’t believe that because there is no intelligence that supports that.”

“We have shared no intelligence with [Schiff] or any other member of Congress that Hunter Biden’s laptop is part of a Russian disinformation campaign,” he continued.

Ratcliffe said that he would know because of his position as intelligence chief whether or not the laptop was part of a Russian disinformation effort.

Ratcliffe then took a swipe at Schiff, saying that he is “using the intelligence community to leverage some political narrative.”

“Don’t drag intelligence community into this,” he warned the California Democrat.

“Hunter Biden’s laptop is not part of some Russian disinformation campaign, and I think it is clear that the American people know that.”

The Biden campaign and Hunter Biden have not disputed the authenticity of any of the emails from his purported laptop that have been published so far. They have also not denied that Biden dropped off the laptop at a computer shop last year.

Fox News reported Friday that a recipient of a Biden email in one of the Post’s stories confirmed its authenticity.