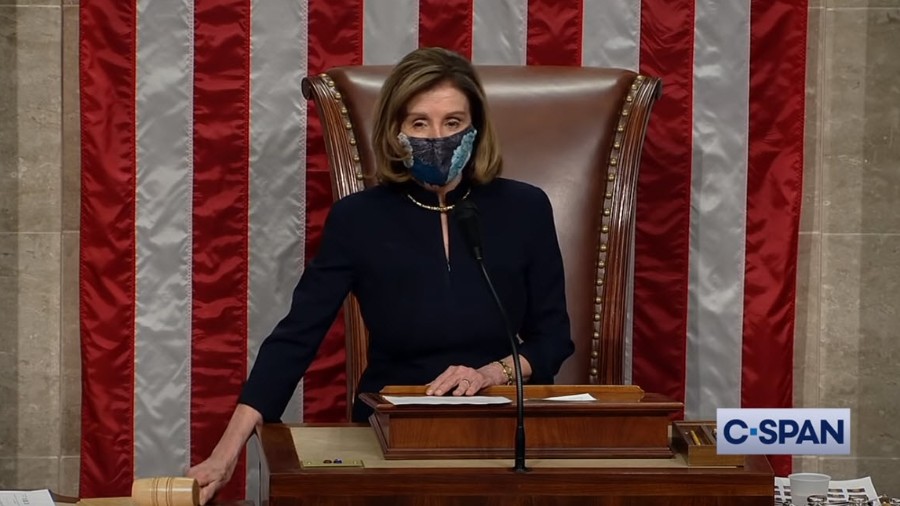 Yesterday, we talked about what Washington, D.C. looked like on “Inauguration Eve”; namely, an evacuated and secured war zone. Yes, Democrats are sending a message about their newly-established power by turning it into exactly that, but apparently House Speaker Nancy Pelosi had wanted to send it in even stronger terms.

According to Ken Cuccinelli, acting deputy secretary at the Department of Homeland Security, Pelosi had even wanted “crew-manned machine guns” (!!!). But her request was turned down, he said Tuesday evening to Martha MacCallum on Fox News, “because there’s simply no use for that in a security arrangement for a civilian undertaking.”

In case you’re a leftist who pretends to know about guns but doesn’t know BBs about them, the term “machine guns” refers to fully automatic weapons, a giant step beyond the semiautomatic weapons used by many for hunting and self-defense that are so often condemned by the left. “Crew-manned machine guns” are probably best known by their associations with front-line warfare and also mass executions of Jews and other enemies by Nazi soldiers during the Holocaust. They mow people down. Personal, hand-held automatic weapons were used to commit shocking mob violence in America during Prohibition.

Just think of the image this would have projected, regardless of whether or not these guns were even loaded. I realize those on the left are trying to make a point about their new dominance, but this over-the-top show of power is shameful and dangerous and tells us a lot about their current state of mind. If anything would incite violence, it’s not Trump, who left quietly, but this symbolic boot-heel.

Where’s the Concern for the Rest of America?

Pelosi had also requested, through the Capitol Police, the many thousands of extra troops, Cuccinelli said, adding, “Some of this has gone beyond any legitimate security need. But they’re disciplined, they’re professional, and the Secret Service has been choreographing this very effectively to maintain security and safety.”

Where was this concern for the rest of America?

When asked why there was a call for “such a tremendous force,” Cuccinelli said “all of it arose on January 6,” partially because Congress was the target.

“At the same time,” he wondered aloud, “where was this concern for the rest of America?”

Good question. He continued: “But when their own (Congress’s) butt was on the line, all of a sudden they want every troop and soldier they can find to protect them.” He said they’re perfectly happy to do what it takes to keep members safe, but “not at the sacrifice of the rest of America.”

“Congressmen aren’t more important than any other American,” he said, and the DHS has been trying to keep everyone safe “through this entire difficult year.”

Out of Proportion to Any Known Threat

Pelosi’s requests were so out of proportion to any known threat that it actually prompted none other than Michigan Rep. Rashida Tlaib to join nine of her colleagues, including the other far-left members of “The Squad,” in writing to Pelosi and Sen. Majority Leader Mitch McConnell urging that national security powers not be expanded.

Consistent with the “even-a-broken-clock-is-right-twice-a-day” theory, they wrote, “We firmly believe that the national security and surveillance powers of the U.S. government are already too broad, undefined, and unaccountable to the people.” Though the letter makes some points I’d gladly debate — including their description of the July 6th attackers simply as a “Trump mob,” as if Trump had sent them — it must be snowing in Hades because I never thought I’d agree with Rep. Tlaib about anything, even a little.

The letter is also endorsed by the Council on American-Islamic Relations (CAIR), and the leftist organizations Demand Progress, Free Press and Win Without War. Could this be an issue on which at least some on both the left and right can find common ground?

“For our part,” the legislators wrote, “we pledge to oppose any attempts to expand the domestic national security or surveillance powers of the United States government at the expense of the rights of our people with every tool available to us as duly elected members of Congress.” Is it too much to hope that when they say “our” people, they’re actually including Trump supporters? Most Democrat leaders hardly consider Trump supporters to be people at all, let alone “our people.” So pardon me if I can’t help thinking there’s something about this I’m missing.

MacCallum also reported Tuesday that pipe bombs were found at the entrances to both the RNC and the DNC headquarters. The unusually non-partisan bomber, as of this writing, is still at large.

In an update to the story on National Guard troops being “ideologically vetted,” Kevin Corke on Fox News said Tuesday afternoon that the head of the Guard has confirmed that a dozen members have been removed from duty because of “suspected far-right extremist ties.” The decision to take them off inauguration duty was apparently based on “inappropriate texts or comments” these members had made. We’re not told what they said that was considered inappropriate but would love to know.

Cuccinelli emphasized, “There is no — I repeat, no — identified threat from any of these people to the inauguration, or any suggestion that I’m aware of that any of them had any intention to do anything other than their duty in the National Guard.” The Secretary of Defense concurred, he said. This is what Cuccinelli called a function of the heightened anxiety in Washington.

“If only they’d been so anxious about the violence all across the country for the last year, we might not have gotten to a point where this seemed to some people to be an acceptable form of political expression,” he said. Agreed, though I’d stress that the vast majority on the right still find it totally unacceptable.

Check out the Babylon Bee’s satirical PSA about how we learn to riot.

This is Not Normal

Chad Wolf, former acting secretary of the Department of Homeland Security, said this level of vetting is “the same as the vetting that was done for most inaugurations.” That includes the involvement of the Secret Service and the FBI.

We respectfully disagree that this is normal, as they’re now apparently picking apart every last tweet and chance acquaintance, placing tens of thousands of troops — American troops — under the intense scrutiny of multiple bureaus. This deployment represents the largest military presence in Washington in American history during peacetime. Former Secret Service agent Dan Bongino, who, as he puts it, “spent my life in the preparedness and security field,” does find the current steps deeply concerning, linking to this from Sara Carter .

“We Don’t Trust You”

The message it sends our troops: We don’t trust you.

Texas Gov. Gregg Abbott doesn’t think the vetting is normal at all and, in fact, is highly offended that the troops he sends would be subjected to this. He tweeted on Monday, “This is the most offensive thing I’ve ever heard. No one should ever question the loyalty or professionalism of the Texas National Guard.”

Texas sent more than 1,000 National Guardsmen to Washington for the inauguration, but Gov. Abbott said, “I’ll never do it again if they are disrespected like this.”

As Breitbart editor and host Joel Pollack noted on Monday, Dilbert creator Scott Adams (who also hosts the enlightening daily podcast “Coffee with Scott Adams”) remarked that “once you start evaluating soldiers for political loyalty, you are on your way to creating something like a Revolutionary Guard that protects one party or leader. Democrats are becoming what they think Trump is.”

“Becoming”? The Democrats, as a party, are there.