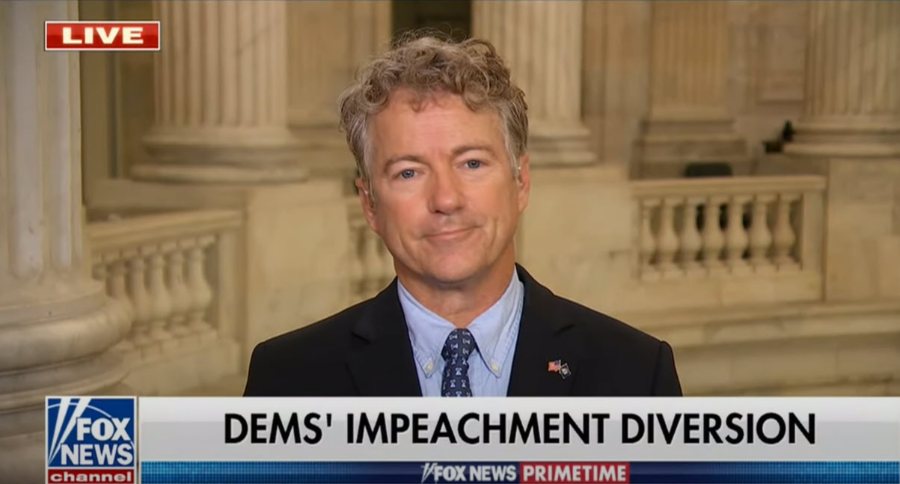 We need a lot more Republicans with the backbone of Sen. Rand Paul.

Sunday, in a remarkable interview, he pushed back forcefully against George Stephanopoulos’ insistence that he say the 2020 election was “not stolen.” As if any objective person, well-versed in what happened before, during and after Election Day, could say that with certainty.

Tuesday, on the Senate floor, Sen. Paul unloaded on Democrats bent on removing a president from office who is already gone. This speech preceded his point of order to affirm that the planned impeachment trial is unconstitutional, as the impeachment of a private citizen is illegal and “essentially, a bill of attainder.”

“It’s almost as if they have no ability to exist except in opposition to Donald Trump.”

Sen. Paul appeared later Tuesday on Fox News with Maria Bartiromo, who reported that the Senate had voted 55-45 to set aside his point of order. Still, with 45 senators on record saying this trial is unconstitutional, there won’t be a conviction and this is all just extremely divisive political theater.

“If you voted that it was unconstitutional,” Sen. Paul told Politico, “how in the world would you ever convict somebody for this? This vote indicates it’s over. The trial is all over.” And in a tweet, Paul said the House impeachment case is “dead on arrival.”

You can see the video of his speech here at Politicrossing, which also has a brief biographical piece on Sen. Paul.

The Kentucky senator opens by talking about what this trial will not do: “unify” the country. It does just the opposite of what Democrats claim to want to do. “Impeaching a former president, a private citizen, is the antithesis of unity,” Paul says. “Unity is the opposite of this travesty we’re about to witness.”

He points out that the appointment of a “pro-impeachment Democrat” to preside is neither fair nor impartial. And he’s right: Sen. Patrick Leahy — whom I would add has already said he would vote to impeach — is presiding instead of Chief Justice John Roberts, who opted out. The refusal of Chief Justice Roberts to participate is, in itself, enough to show this proceeding for the unconstitutional sham it is.

[Related news: on Tuesday, it was reported that Sen. Leahy, 80, was “feeling unwell” and taken to the hospital for examination and tests but returned home Tuesday night. No details were given. We pray for him and his family.]

The Gutter of Rancor and Vitriol

“Hyper-partisan Democrats,” Paul says in his speech, “are about to drag our great country down into the gutter of rancor and vitriol the likes of which has never been seen in our nation’s history.”

Truly, I believe that if you don’t count the Civil War — which seems to be the only worse time that comes to mind these days — Paul is right in saying this is the most “uncivil” it’s been.

“It’s almost as if they have no ability to exist except in opposition to Donald Trump.”

Bingo — and now that he’s gone, they will be aiming their venom at anyone who doesn’t share that opposition. Worse, they’ll feel totally self-righteous and “woke” about it.

Rhetoric as a Recipe for Mob Violence

Paul does a great job of contrasting Trump’s call for “peacefully and patriotically” making their way to the Capitol building to some of the genuinely incendiary comments that have been made by Democrats.

“No Democrat will honestly ask whether Bernie Sanders incited the shooter that nearly killed Steve Scalise,” he says. Sen. Paul was there and saw that it easily could have become a massacre. “[The shooter] fervently believed the false and inflammatory rhetoric spewed by Bernie and other Democrats…[about Republicans opposing Obamacare wanting people to die].” Sen. Paul notes that when the shooter pulled the trigger, he screamed, “This is for health care!!”

Sen. Paul also cites Sen. Cory Booker, who called for his supporters to “get up in their face [of members of Congress],” and Rep. Maxine Waters, who told her supporters “that if you see a member of the Trump administration at a restaurant, at a department store, at a gas station, or any place, you create a crowd, and you push back on them.” Paul is right: Such words are a recipe for mob violence, and this type of rhetoric is one big reason why anyone working for Trump was asking for trouble (and still is) just stepping outside without protection. Because of the severity of the threats, my own daughter Sarah was the first White House press secretary ever to need Secret Service protection.

Paul describes the experience he and his wife had as they left a White House rally on foot, being bullied, screamed at and threatened with death “by the same type of mob that Maxine likes to inspire.” He says that when this happened, he wasn’t sure they’d come through it alive “even with the police protection.” (My wife and I were at that event and had a similar frightening experience, although not as dangerous as Sen. Paul’s.)

He reminds them that Republicans have endured this political climate without stooping to impeach Democrats for inciting violence. They haven’t held Democrats responsible for what Antifa and BLM did, even though that has resulted in deaths, many injuries, and over $1 billion dollars in damage from burning and looting. They haven’t done it even though “many on the Democrat side cheered them on,” Paul says, with Kamala Harris even offering to pay the bill for those who got arrested.

“I wonder if she’ll be brought up on charges of inciting violence,” Paul said, “now that she’s Vice President.” No, he said, because the Republicans won’t go down that “low road of impeaching people for political speech.”

“I want the Democrats to raise their hands if they have ever given a speech that says ‘take back,’ ‘fight for your country.’ Who hasn’t used the word ‘fight’ figuratively…and are we going to impeach every politician who has used the word ‘fight’ figuratively in a speech? Shame — shame on these angry, unhinged partisans for putting on this sham impeachment, deranged by their hatred of the former president. Shame on those who seek blame and revenge, and who choose to pervert a constitutional process while doing so.”

The speech runs just over 9 minutes. It’s a must-see, especially from the 7-minute point on, when he gets into “facts,” “truth” and the censorship of opposing views. This is “a dark blot on the history of our country,” Paul says. “I urge my colleagues to reconsider this kangaroo court and move forward to debate the great issues of our day.” Sen. Paul’s words need to be remembered not only for their importance, but as a reflection of this period of mass political hysteria that we pray America can pull out of.

Make no mistake, it is hysteria. Texas Sen. Ted Cruz quipped to Sean Hannity on Tuesday night that “I feel like I’m kind of trapped in Groundhog Day, where, apparently, every January, we’re gonna be doing another impeachment.”