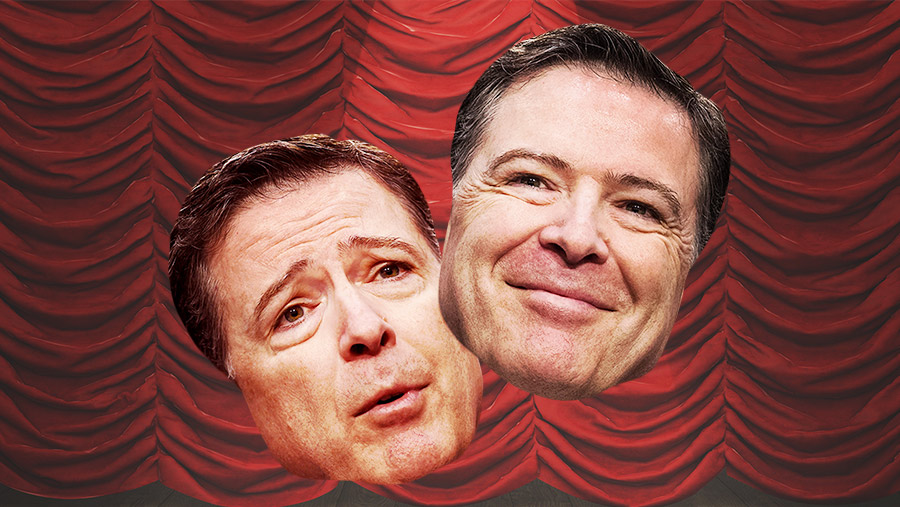 This week brings an avalanche of breaking news concerning bad actors at the FBI and Justice Department. Let’s start with one of the baddest actors of them all, former FBI Director James Comey.

According to investigative reporter John Solomon in The Hill, Inspector General Michael Horowitz is close to completion on his report, and his assessment of Comey’s conduct is scathing. He reportedly has concluded that Comey leaked classified information — which is a violation of the Espionage Act — and showed “lack of candor” (translation: lying). The IG even referred Comey for possible prosecution,. However, Solomon reports that Attorney General Barr is declining to move forward on that.

Don’t Panic. More is to Come

All right now, get a grip. I know it seems that this decision is just one more example of a two-tiered justice system, and at first glance it sure does look like that. We’ve seen it so many times before. Solomon, however, presents this news as just the first shoe to drop. He says there’s much more to come and that Barr’s decision should be seen as part of a larger strategy.

Don’t be dismayed, he says, to hear that Barr has declined to prosecute Comey on this “narrow charge,” because the full story is so much bigger and so much worse. Barr is playing the long game and building his overall case. He wants the first prosecutorial step he takes to be on absolutely solid ground.

According to Gregg Jarrett on Wednesday’s Hannity, Barr can always choose to prosecute Comey on these violations later, at least as long as the statute of limitations hasn’t run out. Let’s hope he does that, as it’s just not right for people such as Mike Flynn and George Papadopoulos to be prosecuted for lying when other far more egregious examples such as Hillary Clinton and James Comey are not. And it would be sadly ironic if Comey wasn’t prosecuted on Espionage Act violations because of the difficulty of proving “intent.” After all, that’s the same rationale Comey himself used for not charging Hillary. And “intent” isn’t even part of the statute.

For now, Solomon advises patience and prefers to focus on the very serious allegations of FISA abuse. Recall that Comey signed the original warrant application to spy on Trump campaign associate Carter Page, swearing that the information in it, based on the Steele “dossier,” was verified when he absolutely knew it wasn’t.

Comey Lies to and Misleads His Own Former Agents

Speaking of Comey, did you know FBI agents came to his house a month after he got fired and that documents were reportedly found there that it was illegal for him to have? We’re only now hearing about this. Also, when he turned over the documents, Comey reportedly did not tell them — his own former FBI colleagues — about some of the leaks from them that he was responsible for. Several weeks passed before the FBI was informed.

But now it’s clear, Jarrett says, why Comey admitted he had leaked information from government documents to trigger the appointment of a special counsel. (He even seemed proud of that, didn’t he?) It was the very night before his testimony that the FBI had shown up at his door and found the documents! They had the word “SECRET” printed at the top, but Comey apparently lied to them and said it was the wrong title. Mr. Morality.

Anyway, don’t get mad (yet) at the attorney general for declining to prosecute Comey (yet) on these first criminal charges. If you’d like something to get mad about, get mad about this:

The American Center for Law and Justice, by suing the Justice Department under the Freedom of Information Act, has finally received copies of immunity agreements that prove Clinton allies Cheryl Mills and Heather Samuelson received immunity from prosecution in exchange for … well, nothing. They turned over their laptops — the ones that had been illegally erased with BleachBit by the Clinton Team but that were to undergo digital forensics to see if some emails could be restored — with the understanding that they would not be prosecuted for their violations of the Espionage Act and other statues relating to the mishandling of government information.

And here’s something extra sneaky: Mills and Samuelson technically retained “custody and control” of the laptops. That way, the Justice Department would be able to deny FOIA requests by saying they didn’t have “custody and control” of the documents in question. If that move wasn’t enough to keep the emails from getting out, they took yet another step: physical destruction of the laptops, as part of the agreement.

These laptops were what are termed “culling” laptops, in that all 62,320 emails from Hillary’s private server had been stored on them.

The report at the ACLJ website lays out all the details, particularly the various statutes and protocols that were violated, all to keep the Hillary email scandal under wraps so she could go forward as the anointed Democratic nominee for President. The “fix” absolutely was in. Get mad about THAT, while Barr continues putting pieces together.