If Only We Could Court-Martial President Biden 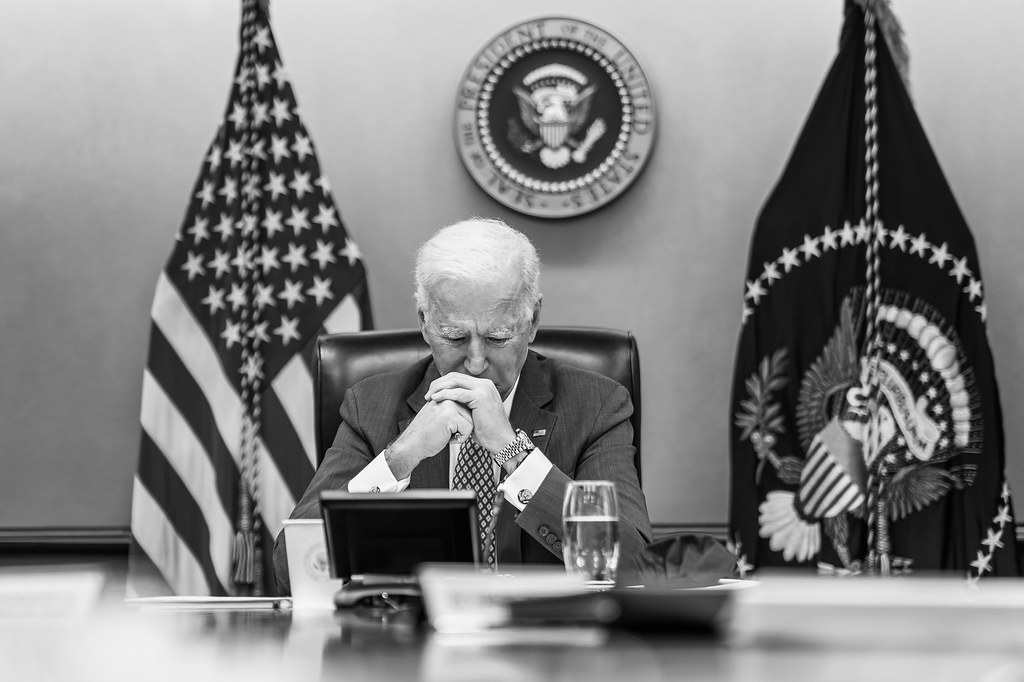 Listen to Ret. Col. Richard Kemp, former chairman of the Cobra Intelligence Group and commander of British forces in Afghanistan and other terrorist hotbeds, from an appearance on “Life, Liberty & Levin” Sunday night:

Kemp might not be aware that under our Constitution, a U.S. President cannot be court-martialed, as he is a civilian. That’s not to say he doesn’t deserve to be. We can joke all we want about taking the keys away from Grandpa, but it’s too late for that. He has already crashed the car.

Grandpa Has Crashed the Car

“I think I would say that I’ve never heard such a disgraceful speech from the President of the United States of America as I heard the other day,” Kemp said earlier in the interview, “when he said ‘the buck stops with me,’ but he then went on to explain how the buck actually stopped with everybody else — it wasn’t him to blame; it was everybody else, starting from President Trump. And suggesting for one moment that he was bound or was forced to carry out a policy because of President Trump’s policy is simply laughable, a pitiful excuse for what he did and what he’s now being humiliated [for].”

We can joke all we want about taking the keys away from Grandpa, but it’s too late for that. He has already crashed the car.

“It’s the greatest foreign policy disaster that I have seen in my lifetime,” he said, “of any nature, from any Western country.” Probably since World War II. It has “unbelievable strategic consequences,” he said, much more so than our withdrawal from Vietnam.

Col. Kemp pointed out that Biden focused in the first seven months of his presidency on reversing so many other Trump policies. When he came into office he was presented with various options; he did not have to do this. “It is not anyone else’s fault,” he said. “It is the fault of the President of the United States of America.”

It was in accusing Afghan forces of cowardice that Biden — “a man who’s never fought himself, I should add” — committed “a national disgrace,” Col. Kemp said. Fifty thousand Afghan fighters have been killed in action against the Taliban over the past seven years. That’s about two-thirds the size of the current British army, he said. Those fighters were doing most of the dying in Afghanistan.

He accused Biden of “pulling the rug out from under the feet” of the Afghan soldiers. They had depended on our air and logistic support. Biden abandoned them, and that was a devastating blow to their morale. They knew at that point that they would never prevail. It was after doing this to them that Biden accused them of cowardice. As a former fighter himself, Kemp said he was “horrified” by that.

Devastating Consequences for the Western World

He sees the consequences of what Biden has done as “absolutely devastating for the whole of the Western world,” single-handedly destroying the credibility of NATO at a time when the terrorist threat is greater than it was at 9/11. “Jihadists around the world have been celebrating,” he said, adding that includes the president of Pakistan, “who should be celebrating, because Pakistan significantly funded the Taliban throughout the conflict, while at the same time being paid vast amounts of money by America and Britain.”

They are reinvigorated by this, he said, and will launch attacks around the world. “They know there’s no fear of Western intervention now,” he said. “That’s finished; that’s history …They know that, and so they’ll be even bolder than before.”

China and Russia are Emboldened

Col. Kemp also noted two other powers who are celebrating: Russia and China. They’ll be emboldened, too. “They will see that they’ve got pretty much an open field to do almost whatever they like.” As for other nations we might want to bring to our side, he said they would see us as “fair-weather-friends.” Tragically, they’ll see Russia and China as more reliable allies than we are.

He said the president of Taiwan has reacted by saying they need to look at strengthening their own defenses. They should, of course, but they’re not capable of defending themselves against China unaided. Ukraine and Israel are also in grave circumstances.

Col. Kemp noted the irony that one reason Biden has given for pulling out of Afghanistan is that he needed to focus more on China and Russia. “This is completely the reverse of what he expected to happen.” China, Russia, Pakistan, and Iran will be more demanding now, to enrich themselves and “to use what they have there to hit against the West.”

It’s not America alone who brought this about, he said; there are European nations, including Britain, who could have done more to try to influence Biden in his decision. But America bears most of the blame. He also made it clear that he meant no disrespect whatsoever toward the American fighting forces, just the leadership.

Stability Has Been Shaken

The stability we’ve grown used to has been shaken by the actions of the United States, he said, in a way that’s “far more consequential” than threats from COVID and climate change. He sees the U.S. going into “deep decline” after this. China will be more dominant. “Our world just became vastly more dangerous.”

Col. Kemp does believe the situation can and must be righted, though it might take several decades. He believes that America is the greatest country in the world. And here’s one final quote for all those young Americans being taught in American schools that America is evil:

The world cannot afford for that status [of the United States], and that position of leadership, and all the good it’s done around the world, decade after decade, I don’t think we can allow it to go, so…I, as a Brit, would certainly encourage the people of the United States of America to turn the situation around, and you ‘ain’t’ gonna turn it ‘round with the people at the helm who are there now.

Court-martialing Biden would be a great start, and I wish we could do it. But it’s that whole disreputable crew — the Democrat leadership — that is responsible for getting Biden (and Kamala) nominated, for knowingly covering up his cognitive inadequacy, for changing rules to make it easier to elect him (I won’t even go into the various means of suspected cheating), and to essentially run his administration. As far as I’m concerned, they have all betrayed America and need to go.