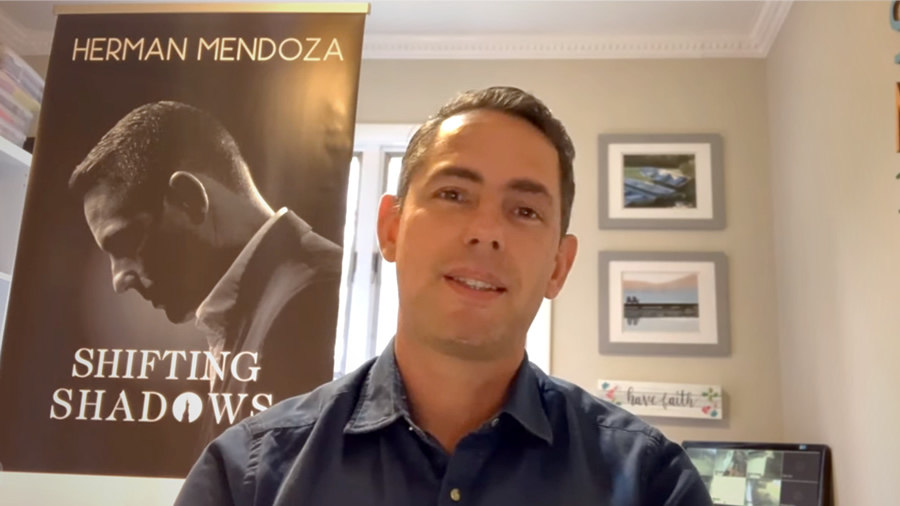 In this screengrab from video, Pastor Herman Mendoza joins LIFE Today Live host Randy Robison on April 27, 2020, for an interview about his new book, Shifting Shadows.

Herman Mendoza was once a New York drug lord with the world at his fingertips. With millions of dollars, women and worldly possessions, Mendoza thought he had it all — until his arrests and detainments led him on a path to discovering God and transforming his life.

Mendoza, author of the new book Shifting Shadows: How a New York Drug Lord Found Freedom in the Last Place He Expected, is now a Christian pastor in New York City.

And he recently told “The Pure Flix Podcast” about his foray into narcotics, explaining that he started experimenting with drugs as a teenager. But it wasn’t until Mendoza’s 20’s when he couldn’t find employment that he really dove deep into the drug trade, following in the footsteps of his brothers. “I was married and living with my wife and I was laid off from a job that I was working at,” Mendoza said. “And so I was desperate for money.”

Listen to Mendoza reveal how he went from a New York drug lord to a pastor preaching the gospel across the globe and finding faith, hope and encouragement:

So, Mendoza joined his brothers in distributing cocaine. It didn’t take long for him to feel untouchable, as money came flooding in and he began to party and enjoy his newfound riches. “I thought that, ‘Hey, this is an easy way to make money and get rich,'” he said, noting, though, that his riches and fun were halted when cops found loads of cocaine in the trunk of his car.

Suddenly, Mendoza was facing life in prison — a reality that left him reeling. “My mind was racing. My heart was like in my throat. It really struck a chord with me because the reality of what I was involved in hit home,” he said. “I was facing 25 years to life, and at the time I had one child. And I was thinking about my child, you know, ‘What’s going to be of my daughter?'”

Mendoza struck a deal and ended up going to prison before being released and jumping right back into the crime mix. “I was a fool … and I went right back into what they call in the streets, ‘the game,'” he said.

Once again, Mendoza found himself arrested and behind bars, with his legal conundrum becoming even more complex and troubling. But then something life-altering happened: his brother, who was also behind bars, became a Christian and set off on a mission to bring Mendoza to faith.

Remarkably, Mendoza’s brother saw his prayers answered. “I gave my life to the Lord … there was no other recourse,” Mendoza said. “I said, I need to try God, I’ve tried everything else. … I had millions of dollars, I had all these things, but it was never satisfying.”

Despite his legal problems and past mistakes, Mendoza decided to become a Christian — an experience that deeply and profoundly impact his heart and mind.

“I felt this warmth that enveloped me. I felt the presence of God,” he said, noting that he suddenly wanted to heal his past mistakes and relationships. “I realized that Jesus paid the price for my sin … I was a walking dead man and now I’m alive in Christ.”

After Mendoza’s release, he started traveling the globe to share the gospel. And today he’s a pastor who is ministering to people in the New York City area.

For more of his incredible story, read his new book, Shifting Shadows: How a New York Drug Lord Found Freedom in the Last Place He Expected.