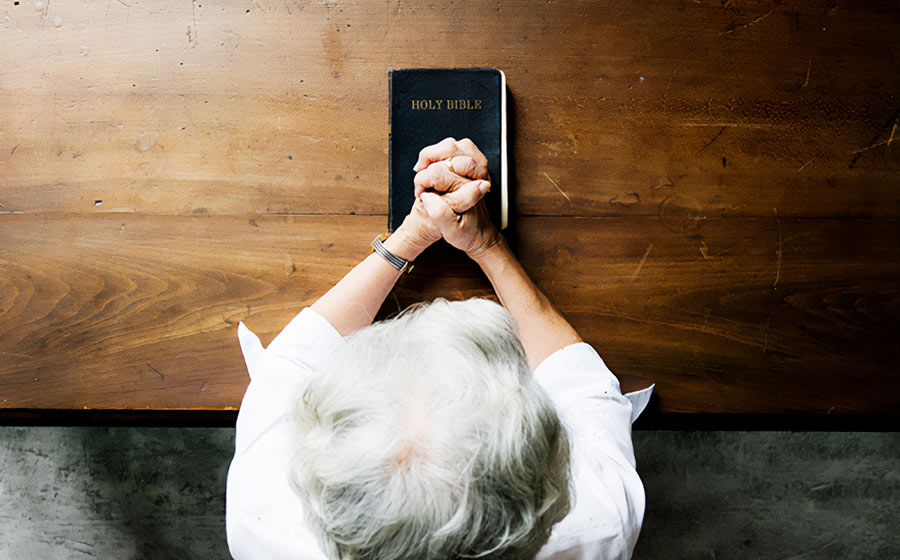 Six days a week from as early as I could remember, between Bible classes and Sunday school, I was in the same building, often the same classrooms, hearing Bible lessons, often from the same people. I spent most of my time and attention on basketball and girls (in that order). I didn’t have much of a faith I could call my own.

Around Christmas in December of 1990, I met someone who would change my life. On the last day of classes before break, instead of a much-anticipated Christmas party, the boys senior high Bible class was sent out in twos to visit the elderly “shut-ins” of our church. I’m sure the intention was to bring Christmas cheer to folks not physically able to get out anymore, but as you might imagine, the only thing we wanted to do less than schoolwork on that day was to visit two old people we’d never met.

I was paired with my friend Brian, who shared my disdain for the assignment. But he had a promising idea. “We’ll go visit one person and say we couldn’t find the other person’s house,” he suggested. “That way, we’ll be done early and can go to the mall.”

That’s how I met Ms. Buckner, who lived down a windy, rural Virginia road in a little apartment attached to her grandson’s farmhouse. Ms. Buckner, an 89-year-old widow, answered the door and invited us inside. There was, shall we say, a pretty significant generation gap in that room. We didn’t know what to talk about, and she didn’t really know what to talk about, either.

Ms. Buckner spoke to God as if she knew Him, with a confidence and humility that only comes when you’re certain that Someone is listening.

Just when we thought it couldn’t get more awkward, Ms. Buckner said, “Let’s sing Christmas carols together.” After we stumbled our way through “Silent Night,” she mercifully decided one carol was enough.

“Yes,” I lied, “we still have one more person to visit before heading back to school.”

“Well, before you go,” Ms. Buckner asked, “can we pray together?”

So I prayed, and then Brian prayed. That took about 45 seconds. Then, she prayed. At that point in my life, I’d probably heard thousands of prayers. But there was something about this one. Ms. Buckner spoke to God as if she knew Him, with a confidence and humility that only comes when you’re certain that Someone is listening.

We left Ms. Buckner’s house and headed to the mall, hoping to meet some girls. On the way there, Brian and I agreed that Ms. Buckner was a pretty cool old woman.

Two years later, (and to this day, I have no idea why) I woke up thinking about Ms. Buckner. I was even less interested in spiritual things by then, but I couldn’t shake the thought. So, I ended up going back down the windy road to her house.

When Ms. Buckner came to the door, I said, “you probably don’t remember me, but two years ago I came here with my friend Brian.”

“John,” she smiled. “I prayed for you this morning.”

Ms. Buckner became a close friend. She prayed for me every day for the rest of her life. I have no idea what she prayed me into or out of over the course of those eight years.

In so many ways, the gap between generations today is more pronounced than it was in the 1990’s. Still, there remains one way to bridge that gap. Prayer can still bridge divides, whether ideological, relational or generational.

Ms. Buckner became a close friend. She prayed for me every day for the rest of her life. I have no idea what she prayed me into or out of over the course of that eight years.

My friend Tony Souder, of the Chattanooga Youth Network, has developed a set of prayer guides that help Christians bridge generations through prayer, just as Ms. Buckner did for me. According to the Barna Group, millennials who stayed in church, compared to those who dropped out of church, were “twice as likely to have a close personal friendship with an adult inside the church.” Tony’s Pray for Me Campaign is a way to facilitate those most essential relationships.

The Pray for Me Campaign equips adult believers to pray for children and students. There are guides aimed to jumpstart intergenerational prayer relationships between parents and their children, grandparents and their grandchildren, and adults and the students in their church.

Visit breakpoint.org/february to learn how you can get a copy of the Pray for Me Campaign’s prayer guide.