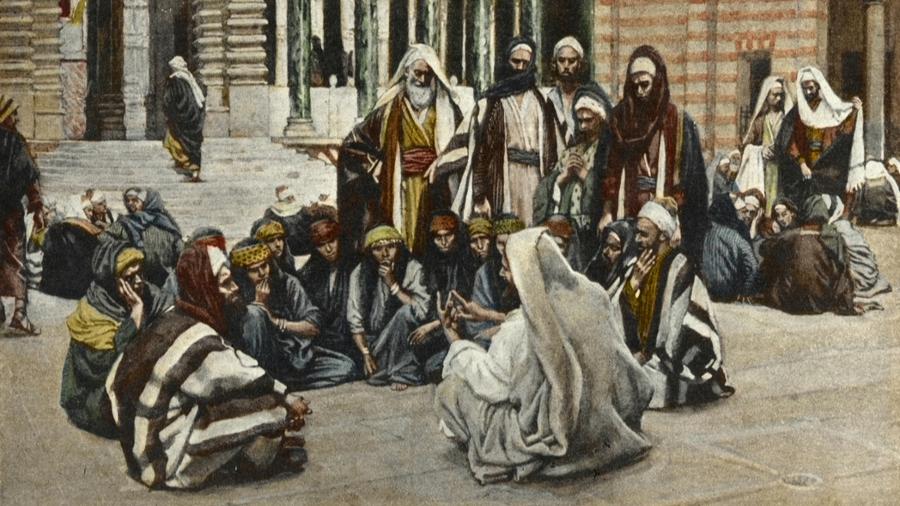 Skeptics frequently argue that the Gospels are not based on eyewitness accounts. They were composed decades after Jesus’ death by people not familiar with first-century Israel. And they wrote after hearing stories passed down to them. And those stories came from others who heard these stories. It’s one long game of telephone. How can we know if we have the actual words of Jesus?

One piece of evidence that goes against the telephone game theory is the parables of Jesus. The gospels present Jesus as a formal teacher or rabbi, with disciples. New Testament scholar Peter J. Williams notes that the Gospels use the word disciple or disciples 195 times. They also describe Jesus as a teacher or a rabbi 62 times. If Jesus was a rabbi in the traditional sense, his students would probably memorize his teaching.

Now think about parables for a moment. They are simple and easy to remember. They have a quality that sticks with you even after hearing them only once. A gifted communicator like Jesus understood this. And if he taught for three years, he’d likely repeat the same parables. The disciples could then pass them on to others without effort.

Now let’s dig in and look at parables, again with the help of Peter J. Williams. I’ll be drawing from his book Can We Trust the Gospels? Before we jump in, we should note that there is no consensus on how many parables are in the Gospels. There are at least 40 in the Synoptics, and John contains few if any.

The Parables in the Synoptics ((Matthew, Mark, and Luke) occur in material unique to each writer. They’re also in the material found in all three Gospels. And they’re in material shared between Matthew and Luke. Jesus tells more parables than any ancient rabbi we have a record of.

The simplest hypothesis is that Jesus told all these parables for three reasons. First of all, Jewish sources often attribute parables to rabbis. But there are few parables in the Old Testament or Dead Sea Scrolls. Nor are they in Deuterocanonicals. Paul didn’t use them. Neither did the other church fathers. Almost all of the parables in the Gospel of Thomas have parallels in the Synoptics.

I should note that some scholars see The Shepherd of Hermas as a parable. But it’s not like anything we find in the Gospels; the genre is different. A lot of it is visionary in nature. And the Shepherd is much longer. Parables are overwhelmingly a Jewish genre. They fit in the time after the Old Testament, but before Christianity became less Jewish.

Secondly, if Jesus told no parables, we need at least 3 parable inventors. Otherwise, we can’t explain those parables unique to each source. But we know parables weren’t popular storytelling forms among early Christian writers. They’re not found in the New Testament epistles. The Church Fathers didn’t use them.

So if Jesus said some parables but others put them into Jesus’ mouth, we have several parable tellers. And they’d have to come from different places at different times. And then in flash, parable inventing had to go out of style among Christians. This seems very unlikely. The simpler hypothesis is there was one master parable teller.

Lastly, Jesus’s parables are literary masterpieces. There is the parable of the sower, the parable of the good Samaritan, and the parable of the prodigal son. And I could go on. So let’s think about this for a moment. What if these were inventions? We would need to posit several later creative geniuses making up these parables. And they’d all happen to credit their less creative founder with their great works.

Parables: Evidence We Have Jesus’ Words

It is also worth noting how Jesus’ parables fit well with the time in which they are set. Rabbi Yohanan ben Zakkai told a parable about a king inviting servants to a banquet. There were some wise and others foolish, the latter made the king angry by not dressing appropriately.

Sound familiar? The key elements of this story are in two different parables of Jesus (Matthew 22:1–14; 25:1–13). Many of Jesus’ parables contain traditional Jewish themes. But Jesus rearranges them to make his own, often giving a surprising conclusion. We also see this in the story of the Rich Man and Lazarus. That means these themes are a product of Jesus’ setting, first-century Israel. They are an awkward fit if the Gospel authors were Gentiles writing decades later, far away.

These three reasons lend credence to the Gospels being based on eyewitness accounts. And they’re more of a clumsy fit on the telephone game hypothesis. Jesus’ parables give us sneaky good evidence that the Gospels are reliable. If they passed on these aspects of his message correctly, chances are they passed on his other words reliably as well.