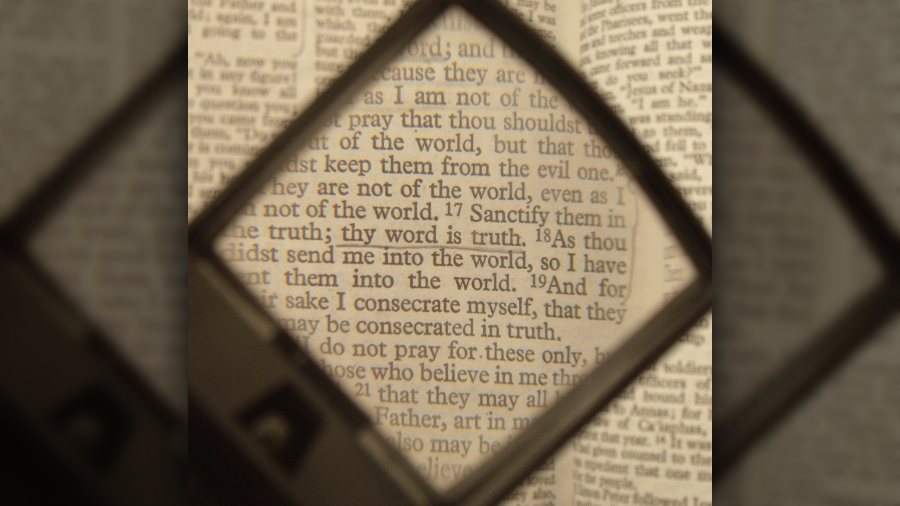 It’s easy to overwrite the meaning of God’s word. We can do it without trying because the process is almost automatic. That’s why we need to vigilantly develop good Bible reading habits.

Reading a Bible verse in context is necessary to understand the verse’s meaning. That’s because the context — the text before and after a verse — determines the meaning of the verse. Change the context, and you change the meaning.

“He needs a pitcher.”

Does the person need a water jug or a baseball player? You don’t know because you lack context. It becomes clear when I add more text.

“The coach called. He needs a pitcher. Can one of the other players fill in?”

It’s obvious that “pitcher” is referring to a baseball player. Consider a different context, though:

“The waiter is asking for your help. He needs a pitcher. Fill it with water and bring it to him.”

Changing the context changes the meaning of the word “pitcher” (now it means jug).

Your Mind Fills The Void

What happens, then, when you read a Bible verse but don’t read the context? Two unfortunate consequences occur. First, you ignore the words the Holy Spirit provided to help you understand the meaning of the verse. You may miss out on what God is trying to communicate. Second, you create what I call a context vacuum. When there’s no context, your mind instantly fills the void with something from your experience. It’s an automatic process.

For example, what comes to mind when you read the following sentence: “Give it to the alien”? Most people will think of an extra-terrestrial because, perhaps, they enjoy science fiction movies. That sentence, however, is written in Deuteronomy 14:21 (an alien is a non-Israelite). But because you read it out of context, your mind quickly filled the context vacuum with something from your own life context — the idea of an extra-terrestrial. Since the verse now has a different context than what was originally in the Bible (and context determines meaning), you overwrite the meaning of the verse with a new meaning that was imposed by your own mind. Our minds do this instantly.

Change the context, and you change the meaning.

Consider another sentence: “He drives like a maniac.” Most likely your mind thought of a person driving his car recklessly on the road. That’s because I created a context vacuum by leaving out the sentences before and after. Your mind instantly filled the vacuum with an idea from your own life experience: recently driving a car on the road. Your personal experience became the context for the sentence, and since context determines meaning, you made the meaning of the sentence be about a reckless car driver.

Those words are from 2 Kings 9:20, however, and are about a person controlling (or not controlling) a chariot. Reading the verse in isolation creates a context vacuum that is quickly filled with our own life context, which creates a new meaning. God’s intended meaning is overwritten by our own meaning.

A Recipe for Interpretive Disaster

These first two examples might seem innocuous (even humorous), but this error can have more serious consequences for theology and decision-making.

Greg Koukl tells the story of a woman he met who was seeking God’s will regarding a new romantic relationship, even though she was already married. As she flipped through the Scripture, Ephesians 4:24 jumped out at her. The verse says, “Put on the new man” (KJV). She took that phrase as God speaking to her through his Word and followed its “advice” by divorcing her husband and putting on a new man.

Her grievous interpretation is caused by the process I just outlined. She read a verse out of context, and then her own life situation (considering a new man) quickly filled the context vacuum. Her life context created new meaning to the verse, which overwrote God’s intended meaning.

If we’re going to take God seriously, we need to take his words seriously. Reading Bible verses or passages in isolation from their context is a recipe for interpretive disaster. There’s no need to do that. The skill needed to learn the context is easy: reading. If you can read a Bible verse out of context, then you can also read it in context. There’s no excuse.

Why Were Some Books Left Out of the Bible?