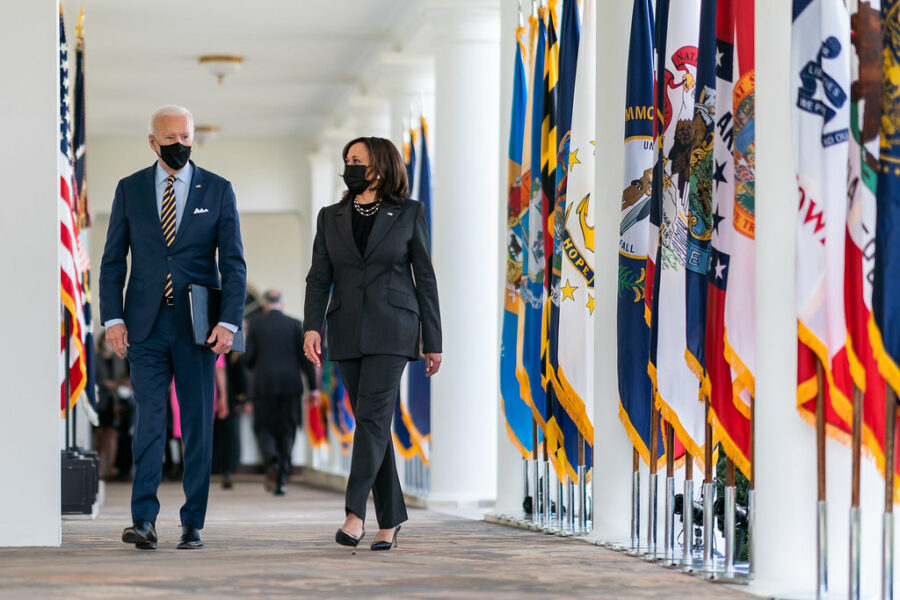 We’ve always known that President Joe Biden has a way of misremembering his own record that is — shall we say — often unrelated to the truth.

But Biden and his team have now developed a strategy that purposely redefines words and describes things as they demonstrably are not. And in many cases, the media help them along.

The most obvious example is the invention of a new meaning for the word “bipartisan.”

A New Meaning for “Bipartisan”

In Washington, D.C., and everywhere else, when a president speaks of “bipartisan” legislation, he means something that’s supported by members of both parties in Congress.

In Biden’s White House, however, that definition is so … yesterday.

“If you looked up ‘bipartisan’ in the dictionary, I think it would say support from Republicans and Democrats,” said Anita Dunn, one of Biden’s top advisers. “It doesn’t say the Republicans have to be in Congress.”

And with that, the D.C. dictionary was distorted.

That allows Biden to ram his priorities through Congress with zero Republican votes, using the vague and arcane process called reconciliation, while still claiming bipartisan support.

Using Dunn’s definition of “bipartisan,” Team Biden can point to public opinion polls that show that at least some Republican voters support whatever it is Biden is trying to achieve.

Helpful to the cause, a Morning Consult/Politico poll found that 60% of Americans view Biden’s performance favorably, including a chunk of Republicans. Inside the poll, you see that the respondents voted for Biden over Donald Trump by a margin of 53% to 35%, or an 18-point spread. In fact, Biden won nationally by just 4 points.

This media-sponsored poll artificially makes it easier for Biden to use his new definition of “bipartisan.”

“Infrastructure” Doesn’t Mean What You Think It Means

Another word Biden has bent to serve his purpose is “infrastructure,” which has up to now been understood to mean projects like roads, bridges, railways, airports, and seaports.

In Biden’s infrastructure proposal, however, spending on those priorities accounts for only 7% of the $2.2 trillion price tag.

Funding for home care workers is included, as is $50 billion for the National Science Foundation to create something called a “technology directorate.” There are also subsidies for electric vehicles and for charging stations.

Those are issues Congress can certainly debate and approve on any given day, but they are not infrastructure.

Another way Biden plays with language and facts is in setting milestones for himself that are already inevitable or easily achievable.

He called his goal to administer 100 million coronavirus vaccine doses in 100 days “ambitious,” and imagined widespread press skepticism where there was virtually none. The truth is, the U.S. was already on pace to meet the mark when Biden took office.

The crisis at our southern border is a frequent victim of Biden’s reshaping facts to suit him.

He claimed that the dramatic increase in migrants attempting to enter the country happens “every single, solitary year.” But the surge in the number of unaccompanied minor children arriving at our border is far higher now than it was in years past.

Biden also claimed in March that he was sending back the “vast majority” of families attempting to cross the border. That was also untrue, as in February less than half of families were turned away.

In this instance, Biden would rather eliminate a word from the dictionary than change its meaning. “Crisis” is not a way the border situation is ever described in Biden World, except once accidentally by White House press secretary Jen Psaki, who was clearly unhappy to have slipped.

When asked if her use of the newly declared non-word “crisis” reflected a change in the administration’s view of the border, she said simply, “Nope.”

Riding to Team Biden’s rescue, The Associated Press dutifully issued an internal memo instructing staff to avoid using the word “crisis” to describe the scene at the southern border, unless it’s inside a quote from a person in a story.

Amid conjured uproar over Georgia’s new election integrity law, Biden took to ESPN to tell a national television audience that he would “strongly support” moving Major League Baseball’s All-Star Game away from Atlanta. After that push from the most powerful human being on the planet, the sport subsequently did exactly that, relocating the game to Denver.

Stepping up to the plate as cleanup hitter a week later was Psaki, who pretended that Biden did not say what he said. In her telling of it, Biden merely acknowledged that Major League Baseball had the right to do what it did.

“Well, he supports them being able to make the decision and respond to what their players’ asks are, given many of them are impacted, of course, by these laws,” Psaki said.

Either words have meaning, or they don’t. And either events happened, or they didn’t. Just because Biden and his handlers try to maneuver around those truths doesn’t mean that the rest of us don’t notice. But George Orwell would be proud of their efforts.

Tim Murtaugh (@TimMurtaugh) is a visiting fellow at The Heritage Foundation and contributor to The Daily Signal. He is the former communications director of President Donald Trump’s 2020 reelection campaign.